A walk along the cliffs of Portrane and Donabate

A beautiful summer Sunday afternoon on the beach at Donabate (Photograph: Patrick Comerford, 2010)

It was good to back in the Church of Saint John the Evangelist in Sandymount this morning. This is a church with a unique tradition within the Church of Ireland, and the faithful parishioners there are always warmly welcoming and generous in their hospitality.

After the Sung Eucharist and coffee, I headed north to Fingal for a walk on some of the prettiest but quietest beaches and one of the best cliff walks in north county Dublin.

Last week, during the great fundraising sale in Portrane, I had a number of walks on the beach, below The Quay. So this afternoon, stopping at Tower Bay in Portrane, I headed south and walked the length of the cliff beside the hospital, above the coves and caves, towards Portrane.

A few yachts and sailboats were out and on the calm seas between Lambay Island and Malahide, and plenty of people were enjoying the cliff walk. But it was surprising how few people were on the beach at Balcarrick ... a few children, a handful of adults. After a week of warm but overcast weather on the east coast, this was a sun-filled day with blue skies and few clouds.

After a late lunch in the Waterside House Hotel, I walked back along the cliffs towards Tower Bay, and called in so to see my cousin Mary Lynders at The Quay. The marquee is still up after the sale last weekend, and Mary is still delighted with that over €30,000 was raised over three days to help projects in Romania and Albania.
Posted by Patrick Comerford at 21:13 No comments:

Are we ready when Christ knocks at the door? 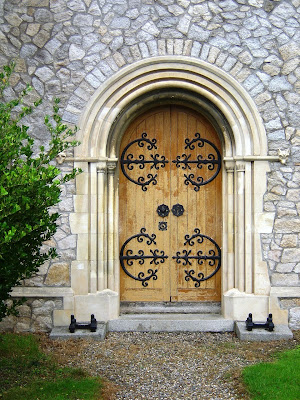 Let your merciful ears, O Lord,
be open to the prayers of your humble servants;
and that they may obtain their petitions,
make them to ask such things as shall please you;
through Jesus Christ our Lord. Amen.

One of the earliest images I have of Christ is William Holman Hunt’s The Light of the World – it was the first image of Christ I remember being shown to me by my grandmother as a small boy in her house in West Waterford.

There are two original copies of this famous painting. The first painting was moved to Keble College, Oxford, and became so popular that Holman Hunt was asked to paint a larger copy. This second version was sold on condition that it toured the world to preach the Gospel and the purchaser would provide cheap colour reproductions.

After travelling the world, the second version of The Light of the World was presented to Saint Paul’s Cathedral, London, in 1904. There it remains to this day as “a painted text, a sermon on canvas.”

And there are countless copies of this painting in vestries and sacristies, rectories and vicarages, and homes throughout the Anglican Communion.

Despite the popularity of this great work of art, few people know what the artist was trying to say, or the spiritual depths he searched, as he worked on this painting. Yet it remains one of the great artistic expressions of Anglican spirituality.

Holman Hunt was a founding member of the Pre-Raphaelite Brotherhood – those young artists and poets of the Victorian era who reacted vigorously against “the frivolous art of the day.” They included Dante Gabriel Rossetti and his sister, the poet Christina Rossetti.

Their paintings of religious or romantic subjects were clear and sharply focused. They believed that art is essentially spiritual in character and that mediaeval culture had a spiritual and creative integrity that was lost in later eras.

But the work of the Pre-Raphaelites often caused offence. When Christ in the House of His Parents by John Everett Millais was exhibited in 1850, it was condemned as blasphemous. Charles Dickens claimed it made the Holy Family look like alcoholics and slum-dwellers with contorted, absurd poses – and Dickens knew better than most how these sorts of people lived in 19th century London.

William Holman Hunt (1827-1910) received his middle name through a clerical error at his baptism in 1827 in Saint Mary’s, Ewell, near Epsom. He was raised in Cheapside in an evangelical family, where he spent much time reading the Bible. He left school at 12, but he persuaded his parents to send him to the Royal Academy Schools to train as a painter.

Holman Hunt began painting The Light of the World in 1851. When it was displayed in 1853, it was harshly criticised. But John Ruskin defended Holman Hunt, and curiosity about the painting reached such a pitch that it went on a national tour by demand.

Holman Hunt later recalled: “I painted the picture with what I thought, unworthy though I was, to be by Divine command, and not simply as a good subject.”

To achieve realism, Holman Hunt did much of this painting at night by the light of a lamp in Ewell, where he was baptised.

The work is full of symbolic meaning, with the contrasts between light and dark, and between luxuriant, abundant plants and the thorns and weeds. The painting shows Christ, the Light of the World (John 8: 12), knocking on an overgrown and long-unopened door: “Listen! I am standing at the door, knocking; if you hear my voice and open the door, I will come in to you, and eat with you, and you with me” (Revelation 3: 20).

In this passage from the Book of Revelation, Saint John was writing about the Church in Laodicea, which was out of fellowship with Christ and the wider Church. It was a church that claimed to believe, but it showed no signs of belief, no fruits of faith. The Christians of Laodicea were unwilling to share their wealth and their prosperity with the poor and the oppressed in their midst.

Saint John could say of its members: “I know your works; you are neither cold nor hot. I wish you were either cold or hot. So, because you are lukewarm, and neither cold nor hot, I am about to spit you out of my mouth. For you say, ‘I have prospered, and I do need nothing.’ You do not realize that you are wretched, pitiable, poor, blind, and naked” (Revelation 3: 15-17).

“Be like those who are waiting for their master ... that they may open the door for him as soon as he comes and knocks” ... Holman Hunt’s The Light of the World

In his painting, Christ’s head bears two crowns: the earthly crown of shame and his heavenly crown of glory. The thorny crown is beginning to bud and to blossom. These are not thorns from a hawthorn hedge, or briars from an overgrown garden in England. These are thorns from branches thrown by soldiers in Palestine on a barrack-room brazier, with spikes three to four inches long, twisted into a rough-and-ready crown set firmly on Christ’s head, each sharp spike drawing blood.

Christ’s loving eyes look directly at you wherever you stand to view this painting. But the sadness on his face is painful. His listening aspect shows that even at the eleventh hour he knocks, hoping for an answer. His hands are nail-pierced, his half-open right hand is raised in blessing, but his feet are turned away, as if he is about to go. For he has been knocking, and he has been left waiting.

For Christ’s royal mantle, Holman Hunt draped his mother’s best tablecloth around his model, but the symbolism was lost on many. Christ who knocks at the door invites us to his table and to the heavenly banquet. The mantle might be a liturgical cope, linking this scene with the eschatological promise in the Eucharist. This cope or mantle is secured by the Urim and Thummim, clasped by the Cross in a symbol of Judaism and Christianity being brought together.

Christ’s robe is seamless, symbolising the unity of the Body of Christ.

Christ’s lantern lights up his features, the doorway, and the way ahead. “Your word is a lamp to my feet and a light to my path” (Psalm 119: 105). To those living in darkness, Christ is waiting to enter their lives. The cords of the lamp, twisted around Christ’s wrist, symbolise the intense unity between Christ and the Church.

The shut door has no latch, no handle, no keyhole – it can only be opened from inside. But the iron-work is rusted, for it is a long time since this door has been opened. The door to our hearts has to be opened from within, through repentance and faith, faith that flowers and bears fruit.

The door is overgrown with the dead weeds and trailing ivy that choke up flowers and any fruit. They would not be there had the door been kept open. All the plants have been overtaken by brambles, because this a place to which the gardener has not come.

Above flies a bat, blind and unable to see in the darkness, long associated with ruin and neglect. Below, the fruit has fallen to the ground and some are rotten. Yet the light from the lamp shows this fruit has come from a good tree.

In words that echo many of those ideas that inspired Holman Hunt as he painted The Light of the World, Christ says in our Gospel reading this morning: “Be dressed for action and have your lamps lit; be like those who are waiting for their master to return from the wedding banquet, so that they may open the door for him as soon as he comes and knocks” (Luke 12: 35-36).

When he comes and knocks at your door, will the owner of the house be prepared and ready?

Will Christ be welcome to sit down and eat with you?

Will the fruits of our faith be flowering?

Or will they be crushed and scattered on the ground beneath him?

And how do we know if we are ready and are prepared?

We are told in our reading from the Prophet Isaiah how to be ready. We must “… cease to do evil, learn to do good; seek justice, rescue the oppressed, defend the orphan, plead for the widow” (Isaiah 1: 16-17).

And if we are ready, then we shall be prepared to open the door and to invite him in.

We must be found to be neither cold nor hot.

We must be refreshed by the living waters of faith, and fired with zeal for the love of Christ and for his world.

Then can we sit and eat and drink with the Lord at the Heavenly Banquet.

And so may all our thoughts, words and deeds be to the praise, honour and glory of God, + the Father, the Son, and the Holy Spirit, Amen.

O God,
as we are strengthened by these holy mysteries,
so may our lives be a continual offering,
holy and acceptable in your sight;
through Jesus Christ our Lord.

Canon Patrick Comerford is Director of Spiritual Formation, the Church of Ireland Theological Institute, and a canon of Christ Church Cathedral, Dublin. This sermon was preached at the Eucharist in the Church of Saint John the Evangelist, Sandymount, Dublin, on Sunday 8 August 2010.
Posted by Patrick Comerford at 11:30 No comments: