A day in Chania, the second city of Crete

The old harbour of Chania ... the city is the second largest in Crete and was the island capital until 1971 (Photograph: Patrick Comerford, 2012)

After church and after breakfast on Sunday morning [1 July 2012], two of us caught the bus to Chania (Χανιά), about 70 km west of Rethymnon and a bus journey that took a little more than hour.

With a population of almost 59,000, and over 108,000 people in the greater Chania area, this is the second largest city in Crete.

The city’s origins dates back to the Minoan settlement of Kydonia, later this was an important city-state in Classical Greece, and it is mentioned by Homer in the Odyssey. Little is known about the history of Chania throughout the early Christian period, the first Byzantine period or under the Arabs, when the city was known as al-Hanim (“the Inn”). When the Byzantine Empire retook the city in 961 AD, its name was changed into Greek Chania, and the city also became the seat of a bishop.

After the Fourth Crusade in 1204 and the fall of Byzantium, Crete was sold to the Venetians for 100 silver marks. Under the Venetian rule, Chania flourished as La Canea. The walls of the old city, its impressive fortifications and many of its finest buildings date from the Venetian period, which developed a blend of Byzantine, Venetian and Classical Greek cultural elements.

On 2 August 1645, the Ottoman Turks captured Chania after a two-month siege. Most of the churches were turned into mosques, new mosques were built, along with public baths (hamam) and fountains. Chania became a Turkish city, and the pasha of Crete lived here.

The Greek nationalist leader Daskaloyiannis was tortured to death in Chania in 1770, and half a century later, during the Greek War of Independence, the Bishop of Kissamos, Melchizedek Despotakis, was hanged from a tree for his part in the struggle.

After the Pact of Halepa was brokered in 1878, many of Chania’s Muslims moved to Turkey. In 1898, Chania became the capital of the semi-autonomous Cretan State headed by Prince George of Greece as High Commissioner, and the city became a more cosmopolitan place.

Crete was united with Greece on 1 December 1913, and the Greek flag was raised for the first time at Fort Fírkas at the end of the Old Harbour. There were no Muslims left in Chania when it came to exchange of Muslims and Greeks between Greece and Turkey in 1922.

The German invasion of Crete in World War II and the Battle of Crete in 1941 have left their scars on the city. Parts of Chania were bombed, many people were executed and jailed, and the Jewish community was wiped out. Chania recovered after the war, and although the capital of Crete was moved from Chania to Iraklion in 1971, the city has benefitted from the growth of popular tourism in Greece form the 1970s on.

From the bus station, it was a 10-minutes stroll into the old town along one side of Plateia 1866 and down Halidhon Street, through the remains of the Venetian fortifications dating from 1538, with the Schiavo Bastion to one side. 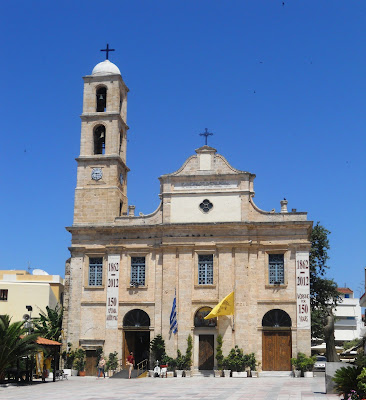 We diverted along Odhos Skridhlóf or “Leather Street” which is one of the main tourist shopping streets in the old town. But our first stop was at Platia Mitropoleos, where Chania Cathedral is celebrating 150 years since it was built in 1862.

Immediately below the square are the dozen domes, painted in garish pink and covered in graffiti, of a former haman or Turkish bath. It’s now a smart boutique, but the staff were welcoming when I asked to take photographs.

Across the street, through an alleyway, is the elegant courtyard of the Capuchin Friary and Chania’s modern Catholic Church. Next door, the Venetian-era church of the former Saint Francis Monastery is now the Archaeological Museum of Chania. It houses findings from different parts of Greece and from several historical and pre-historical periods of the local history.

We continued on into the Harbour Squre, Eleftherios Venizeols Square or Platia Syntrivani, the main square of the Old Town. 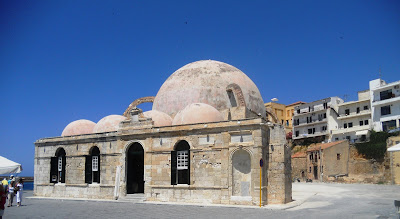 The Mosque of the Janissaries is the oldest surviving Ottoman building in Crete (Photograph: Patrick Comerford, 2012)

On the eastern side of the Harbour, we visited the impressive, domed Mosque of the Janissaries, or Hassan Pasha Mosque. This was built in 1645, and is the oldest surviving Ottoman building in Crete. Inside, local artists and craft workers were exhibiting jewellery, paintings, clothes, mirrors and tapestries, and even the mihrab of the former mosque was being used to display exhibits.

The Janissaries were first introduced to the Turkish army in the 14th century as a permanent component in an army raised through feudal levies. The best of Christian boys, both in brain and brawn, were taken from their families as tribute in the levy known as the devsirme. The Janissaries were feared even by the sultans: Osman II in 1622, and Selim III in 1807 were killed by Janissaries, and it was not until 1826 that Mahmut II had the power and the strength to disband the Janissaries.

We had lunch in Plateia, in the square behind and the mosque and looking across at the lighthouse, which looks almost like a minaret. We then strolled along the marina, and then back around the old harbour, lined with restaurants, cafés and bars, and above them old crumbling Venetian mansions and Ottoman balconies, as far as Fírkas, where the Greek flag was still fluttering in the sea breeze.

We then stepped back into the old town with its crumbling Venetian mansions – one roofless and so dilapidated that trees are growing inside, yet the courtyard was set out with the tables of a fine restaurant.

All but one of the Jews of Chania perished at the hands of the Nazis in World War II (Photograph: Patrick Comerford, 2012)

We soon found ourselves in former Jewish quarter, which is still known as Evraiki or Ovraiki. Here there are narrow alleys and old charming buildings, many restored as hotels, restaurants, shops and bars. The Etz Hayyim Synagogue has been restored by local people, and although it was closed yesterday, the notices outside offer an inclusive welcome.

All but one of the Jews of Chania were rounded up by the Nazis and with 500 captured partisans they were deported from the island in 1944. Tragically, the Tanais, which was carrying the Jewish captives, to Auschwitz, was hit by a British torpedo off the island of Milos.

The names of the 276 Jews who perished are inscribed on a plaque in a garden cemetery behind the synagogue. It is a sign of the times – and a sad reminder of the dangers brought by the rise of the far-right in Greece today – that there is a permanent police presence outside the Etz Hayyim synagogue, even when it is closed.

Posted by Patrick Comerford at 07:21 No comments: