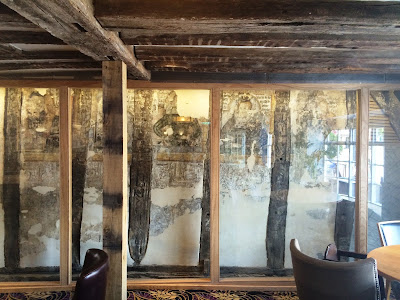 Tudor wall paintings were uncovered when the Salisbury Arms was being transformed into The Star in Hoddesdon (Photograph: Patrick Comerford, 2015)

There is a difference between English pubs and Irish pubs that I find very difficult to put my finger on. I am staying at the High Leigh Conference Centre near Hoddesdon in Hertfordshire, taking part in the annual conference of the Anglican mission agency Us (formerly USPG, the United Society for the Propagation of the Gospel).

There are opportunities in the early mornings for walks in the countryside, and it is just 2 or 3 km walk along Lord Street into the centre of Hoddesdon.

As for Hoddesdon, the town once had at least 30 inns at the end of the 16th century, apart from alehouses and taverns that did not provide accommodation. A document in the 1590s names five of those inns: the Lyon, the Bell, the Chequers, the George and the Swanne.

Of those five, the Bell, the Chequers and the George no longer exist, the Swanne is now the White Swan, and the Lyon was the Salisbury Arms, three or four doors further along the High Street.

Sir Nikolaus Pevsner described the White Swan as “visually the most striking timber-framed inn in the district” (Photograph: Patrick Comerford, 2015)

In 1977, the architectural historian Sir Nikolaus Pevsner described theWhite Swan as “visually the most striking timber-framed inn in the district.” Most of the building dates from the late 16th century, although part of the rear wing was added in the 19th century.

However, the Salisbury Arms at 51-52 High Street, Hoddesdon, had been closed when I was at High Leigh last year, and had been bought out by the “cheap and cheerful” Wetherspoon chain of pubs.

As you may imagine, there fears about the future of this building which is a Grade II. When it was listed over half a century ago in 1961, it was believed to be a 16th century building that had been refronted in the 18th century, with ground floor details from ca 1820 and a rear extension from the 19th century. 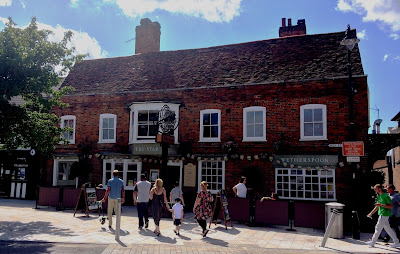 The Salisbury Arms opened at the end of last year, renamed The Star (Photograph: Patrick Comerford, 2015)

Until recently, the Salisbury Arms was owned by Orchid Pubs, and in early 2013 the Salisbury re-branded itself as an establishment for over-21s only.

But three years after trying and failing to open a pub in Hoddesdon, the Watford-based JD Wetherspoon chain, which has more than 800 pubs and bars across the UK, finally got a foothold in the town when it bought the Salisbury Arms.

The old pub was closed down on 27 November 2013 and work began on refurbishing and redesigning the place in Wetherspoon style. On Facebook, one of the people opposing the planned changes posted: “Unfortunately I’m in the minority that prefer a good old English pub with traditional ales ... it’s a shame we have to give in to large chains.” 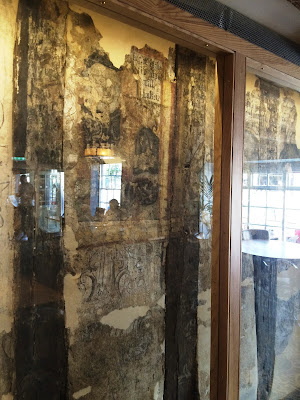 The wall paintings were discovered on the north wall of the bar (Photograph: Patrick Comerford, 2015

Then, as the refurbishment work continued last year [September 2014], a series of 16th century wall paintings of “national importance” was uncovered in September 2014.

The paintings depict fascinating examples of Elizabethan clothing and millinery and exhibit a high level of technique. At the time, it was said discoveries of this quality are extremely rare and that the implications for art history give them national importance.

Conservation work was carried out by the Perry Lithgow Partnership, which had undertaken a similar conservation project at a pub in Tewkesbury. The work involved surface cleaning of all the paintings, which had been hidden behind panelling for hundreds of years. 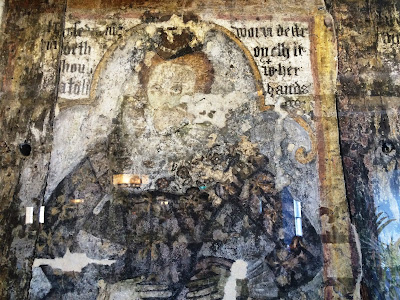 An air vent was inadvertently inserted through the head of the central figure (Photograph: Patrick Comerford, 2015)

When they were discovered, the wall paintings were covered in thick layers of dirt and debris, hidden behind plaster boards, laths and plaster work, and some parts had been damaged by building work over the centuries and even by scratching rats. An air vent had inadvertently been inserted through the head of the central figure, much of the paint layer was flaking and there were many losses in the decorative scheme on the plaster and timber.

Richard Lithgow of the Perry Lithgow Partnership, said at the time: “It is rare. Lots of these paintings in domestic properties have been hidden behind panelling. People don’t know what they have found and they are destroyed.”

Five of the paintings depict half-figures, within tri-lobed frames, with Biblical texts in the associated spandrels. The figures are alternating male and female, and one of the females is holding a lap dog. The sixth panel, at the western (right) end of the series, is an earlier layer and has fragmentary remains of black decorative drawing.

The pub re-opened as ‘The Star’ shortly before last Christmas [2014], and the paintings are now on public view, protected behind a glass screen, with informative descriptions of their importance on display boards alongside.

The highly-coloured decoration originally extended down to floor level, and onto the flanking timber posts, with a painted dado scheme of grotesques and scroll work, and it is thought that the scheme continued around at ground-floor level. 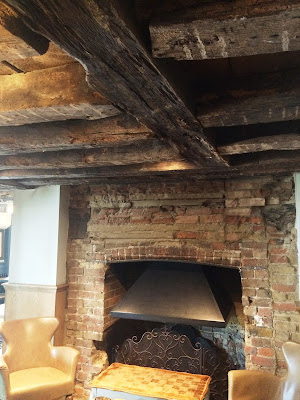 Dating the timber beams shows the building dates back to the 1440s (Photograph: Patrick Comerford, 2015)

The conservation and restoration work now shows that the building is older than anyone had believed. An examination of the roof beams show that they date from the mid-15th century, and it is now thought the building was originally a mediaeval open hall.

Four timbers from the north wall and adjacent floor were dated and found to have been felled over a few seasons, from the Winter 1446-1447, through Spring 1447 to Spring 1448, or within a year or two after that date.

According to the Hoddesdon-based writer Stephen Poulter, who has written about the history of the town, the pub was known as the Star in the early 1500s. It was the Black Lion by the mid-16th century, when it was held from the Manor of Geddings, owned by the Cecil family later became Marquesses of Salisbury. Henry Barrell or Burwell, serjeant-at-arms and tenant of the ‘Black Lion,’ died in 1562.

The Manor Court was held on the premises for about 200 years, until 1826, when it was still the Black Lion, but by the late 1830s it had become the Salisbury Arms, and for a time it was also an hotel.

I realised during my visit that there can be few pubs, and certainly few Wetherspoon pubs, where you find yourself sipping a glass of white wine on a summer afternoon and realise you are in a mediaeval hall that has once served as a manor court, enjoying exposed late mediaeval timber beams and admiring late Tudor plaster wall paintings with Biblical quotations. 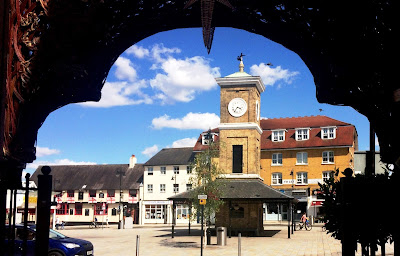 The Clock Tower in Hoddesdon, seen through the arch at the beer garden in The Star (Photograph: Patrick Comerford, 2015) 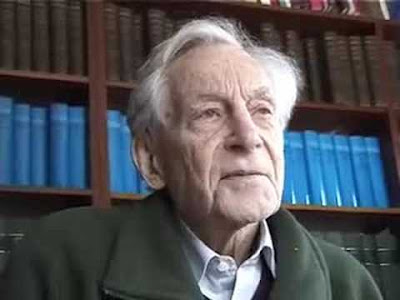