The missing heir from
Limerick who inspired
Rudyard Kipling’s story 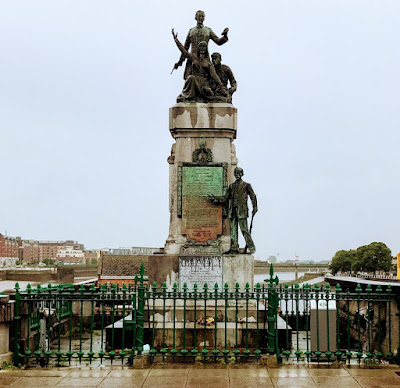 The 1916 memorial on Sarsfield Bridge stands on the site of a statue to Viscount Fitzgibbon and the dead of the Crimean War (Photograph: Patrick Comerford, 2017)

Both clubs add to the interesting stories of Sarsfield Bridge, whose name recalls Patrick Sarsfield, the Earl of Lucan, who played a commanding role at the Siege of Limerick in 1691.

But the bridge was known originally as Wellesley Bridge, in honour of the Duke of Wellington. The Limerick Bridge Commissioners were incorporated in 1823 to build the bridge and a floating dock ‘to accommodate sharp vessels frequenting the port of Limerick.’ The Act was introduced into Parliament by the Thomas Spring Rice (1790-1866) of Mount Trenchard, then MP for the City of Limerick and later MP for Cambridge, Chancellor of the Exchequer and 1st Lord Monteagle.

The foundation stone was laid in 24 October 1824 by John Fitzgibbon, Earl of Clare. The design of the bridge was based on the Pont de Neuilly in Paris. The bridge was designed by the Scottish architect and engineer Alexander Nimmo (1783-1832), and it took 11 years to build. Nimmo’s other projects included designing the village of Knightstown on Valentia Island, Co Kerry, the road from Galway to Clifden and the harbour of Roundstone in Connemara.

When Nimmo died in 1832, the bridge was completed by John Grantham in 1835 at a total cost of £89,601, 50 per cent more than the original estimate. The contractor was Clements and Son. When the bridge finally opened on 5 August 1835 it was a particularly important development for Limerick, allowing the city to expand on the northern shore of the River Shannon.

The bridge has five large and elegant elliptical arches with an open balustrade, running from an artificial island, originally called Wellesley Pier and now known as Shannon Island, to the north shore, and a simple flat, swivel deck with iron lattice railings crossing a canal and road from the island to what was known as Brunswick Street and is now Sarsfield Street.

Each span of the bridge reaches 70 ft, with each arch rising to a height of 8 ft 6 in. The existing metal swivel bridge, made in Darlington, replaces an earlier 19th century twin-leafed swivel bridge made in Liverpool and connects the island to the shore.

The swivel end of the bridge is no longer functional, although some of its heavy machinery is still intact underneath the roadway. A lock system has replaced the swivel section to allow for the passage of smaller boats. But, apart from this, the bridge has remained largely unchanged since it opened and still has its original lamp standards.

The monument on the bridge commemorates the 1916 Rising. But an earlier monument was erected on this site in 1857, commemorating John Charles Henry Fitzgibbon (1829-1854), Viscount Fitzgibbon of Mountshannon House in Castleconnell, Co Limerick.

John Charles Henry FitzGibbon was educated at Christ Church, Oxford, Oxford, and became a lieutenant in the 8th (King’s Royal Irish) Hussars. He was killed in the Charge of the Light Brigade at Balaclava in 1854.

Fitzgibbon’s statue, cast by the sculptor Patrick MacDowell (1799-1870), showed him standing in his uniform on a stone plinth decorated with the names of those from Limerick who were killed in the Crimean War. The statue was flanked by two Russian cannons captured in the Crimean War.

The plaque on the bridge read:

To commemorate the bravery of
Viscount Fitzgibbon
8th Royal Irish Hussars
& of his gallant companions in arms
natives of the County & City of Limerick
who glouriously fell in the Crimean War.

Fitzgibbon was reported ‘missing presumed dead’ during the Charge of the Light Brigade. There is a story that he married Frances Murphy in 1854 in a clandestine marriage, and that he had a posthumous son, William John Gerald FitzGibbon, who was born in 1855.

Fitzgibbon’s body was never found and inevitably there were stories that he had not been killed at Balaclava. One story claimed in 1877 that he had been taken prisoner, and that later, for an assault on a Russian officer, he had been sent to Siberia. The stories claimed he later returned to England, and visited the Hounslow Barracks, where the 8th Hussars were stationed, and that there he was identified by Colonel Mussenden and Quartermaster-Sergeant-Major Hefferon, who had been Fitzgibbon’s servant.

A similar story gained currency 25 years after the Charge of the Light Brigade. During the second Afghan War (1878-1880), Fitzgibbon’s regiment, the 8th Hussars, were stationed near the North-West frontier.

One night a dishevelled looking man who spoke English, but seemed unaccustomed to doing so, was brought into the officers’ mess. He was invited to stay for dinner, where he surprised all by having an uncannily good knowledge of the regimental customs, indicating he was an ex-officer of the regiment. He was not asked to identify himself, but on examining the regimental records it was discovered that the only ex-officer whose whereabouts had not been positively accounted for was Viscount Fitzgibbon.

Rudyard Kipling was intrigued by the story and it provided the basis for his short story The Man Who Was, in which a man arrested for gun-stealing and believed to be an Afghan turns out to be an ex-officer who has been a Russian prisoner for many years before escaping and finding his way back to his regiment.

Meanwhile, Wellesley Bridge continued as a toll bridge, and tolls continued to be collected until 1883. The name of the bridge was changed to Sarsfield Bridge that year, but Fitzgibbon’s statue continued to stand on the bridge until it was blown-up by the IRA on 9 June 1930, leaving only the podium intact. The cannons survived and are still apparently outside the Harbour Master’s office.

The plinth was unused for many years until the erection of the present memorial, which is the work of the sculptor Albert Power, in 1954. One of the original stone plaques from the Crimean Memorial was overlain by a bronze plaque that records in Irish the names and events of the 1916 Rising. Another plaque reads: ‘This memorial was erected by means of voluntary public subscriptions in memory of the Limerick men and their comrades who died ... during the Easter Rising of 1916.’

The memorial has bronze statues depicting the Fenian Tom Clarke, a signatory of the 1916 Proclamation, pointing to the proclamation. At the top is Clarke’s brother-in-law, Commandant Edward Daly, Con Colbert from Athea, Co Limerick, who is seen crouching, and a chained allegorical figure representing Mother Ireland. The Mother Ireland figure is said to be based on Tom Clarke’s wife, Kathleen Daly, a Limerick woman. 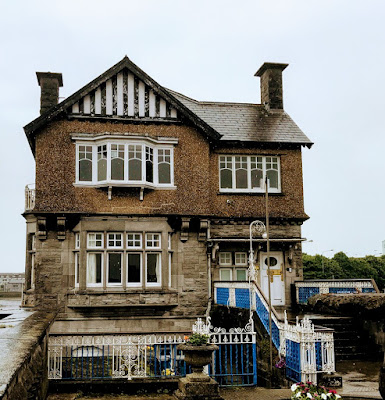 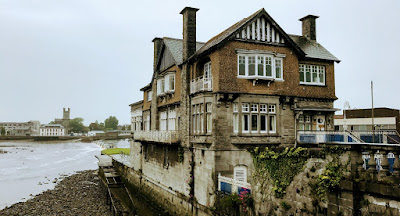 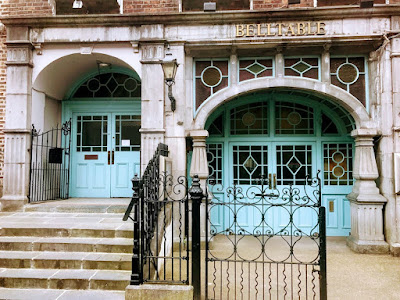