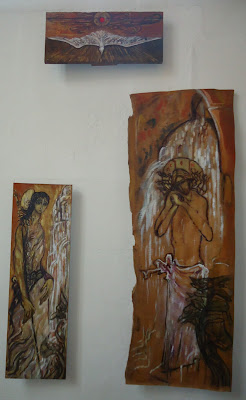 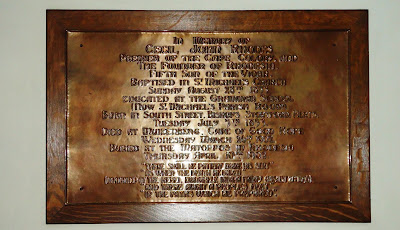 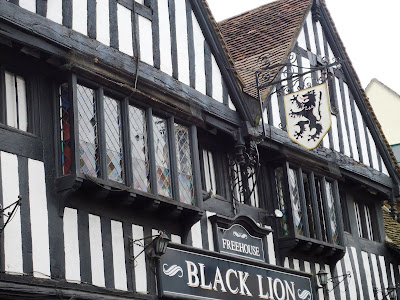 Posted by Patrick Comerford at 23:50 No comments: 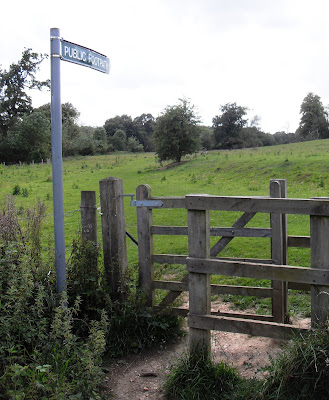 I am back in the High Leigh Conference Centre on the fringes of Hoddesdon for the annual conference and council meeting of Us – the Anglican mission agency previously known as USPG (the United Society for the Propagation of the Gospel).

This morning, in my prayers, I remembered and gave thanks for my ordination to the priesthood 12 years ago on 24 June 2001 by Archbishop Walton Empey in Christ Church Cathedral, Dublin.

I arrived at Stansted Airport this morning, and for the next three days I am staying at High Leigh, close to the the paired, neighbouring towns of Hoddesdon and Broxborune. Their proximity of these towns to Stansted Airport and the railway station at Broxbourne means they are within commuting distance of North London. And yet both towns have beautiful buildings that date back to the late mediaeval period, and I am surrounded by beautiful countryside.

Hoddesdon and Broxbourne are on the borders of Hertfordshire and Essex, two counties that encapsulate all that the poet John Betjeman saw as brash and over-developed in the area immediately north of London. Yet these two counties still contain so much that typifies the English countryside and picture-postcard English towns and villages.

I imagine that Irish visitors hardly glance at much of this countryside and the charming towns and villages as they speed by on the Stansted Express to Liverpool Street Station and London. How often do they cast a glance at the fields and countryside described by Betjeman as

…Clothed, thank the Lord, in summer green,
Pale corn waves rippling to a shore
The shadowy cliffs of elm between,

In his poem ‘Hertfordshire’, Betjeman recalls trudging through these fields in his childhood, and he returns to this area, perhaps at this time of the year, to find some of those fields are still there, but the Hertfordshire he knew as a child has been devastated by the spread of urbanisation,

One can’t be sure where London ends,
New towns have filled the fields of root ...

But in the sunshine and “summer green” this week, I expect to enjoy some walks through these “mildly undistinguished hills” and lanes, and through welcoming fields, to find some timber-framed houses and pubs, and, perhaps, some “Flint churches, brick and plaster patched.”

The White Swan on the High Street in Hoddesdon … a timber-framed Hertfordshire pub rated by Sir Nikolaus Pevsner as “visually the most striking timber-framed inn in the district” (Photograph: Patrick Comerford)

I had forgotten Hertfordshire,
The large unwelcome fields of roots
Where with my knickerbockered sire
I trudged in syndicated shoots;

And that unlucky day when I
Fired by mistake into the ground
Under a Lionel Edwards sky
And felt disapprobation round.

“How many times must I explain
The way a boy should hold a gun?”
I recollect my father’s pain
At such a milksop for a son.

And now I see these fields once more
Clothed, thank the Lord, in summer green,
Pale corn waves rippling to a shore
The shadowy cliffs of elm between,

They still are there. But now the shire
Suffers a devastating change,
Its gentle landscape strung with wire,
Old places looking ill and strange.

One can’t be sure where London ends,
New towns have filled the fields of root
Where father and his business friends
Drove in the Landaulette to shoot;

Tall concrete standards line the lane,
Brick boxes glitter in the sun:
Far more would these have caused him pain
Than my mishandling of a gun. 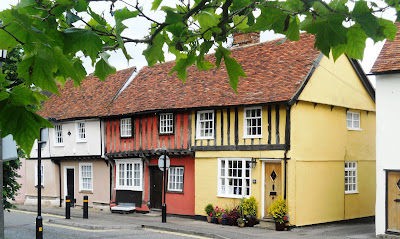 According to Betjeman, the neighbouring county of Essex is “a stronger contrast of beauty and ugliness than any other southern English county.” He says, “Most of what was built east of London in the 19th and 20th centuries has been a little bit cheaper and a little bit shoddier than that built in other directions. Southend is a cheaper Brighton, Clacton a cheaper Worthing, and Dovercourt a cheaper Bournemouth.”

On the plus side, he says Essex “also has the deepest and least disturbed country within reach of London … flat agricultural scenery with its own old red-brick towns with weather-boarded side-streets.”

For Betjeman, “The flat part of Essex … is part of that great plain which stretched across to Holland and Central Europe.”

This morning, I have been visiting a part of Essex close to Saffron Walden and Bishop’s Stortford, which is on the borders of Hertfordshire and Essex. Betjeman describes this area as “undulating and extremely pretty in the pale, gentle way suited to English watercolours. Narrow lanes wind like streams through willowy meadows, past weather-boarded mills and unfenced bean and corn fields.

“From oaks on hill-tops peep the flinty church towers, and some of the churches up here are as magnificent as those in neighbouring Suffolk – Coggeshall, Thaxted, Saffron Walden and Dedham are grand examples of the Perpendicular style. Thaxted, for the magnificence of its church and the varied textures of the old houses of its little town, is one of the most charming places in Britain.”

Essex is often – and wrongly – regarded as a poorer sister of neighbouring Suffolk. But I agree with Betjeman that Essex looks its best in sunlight, “when the many materials of its rustic villages, the brick manor houses, the timbered ‘halls’ and the cob and thatched churches, the weather-boarded late-Georgian cottages, the oaks and flints, recall Constable.” 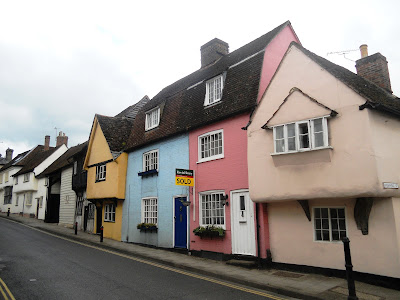 “The vagrant visitor erstwhile,”
My colour-plate book says to me,
“Could wend by hedgerow-side and stile,
From Benfleet down to Leigh-on-Sea.”

And as I turn the colour-plates
Edwardian Essex opens wide,
Mirrored in ponds and seen through gates,
Sweet uneventful countryside.

Like streams the little by-roads run
Through oats and barley round a hill
To where blue willows catch the sun
By some white weather-boarded mill.

“A Summer Idyll Matching Tye”
“At Havering-atte-Bower, the Stocks”
And cobbled pathways lead the eye
To cottage doors and hollyhocks.

Far Essex, – fifty miles away
The level wastes of sucking mud
Where distant barges high with hay
Come sailing in upon the flood.

Near Essex of the River Lea
And anglers out with hook and worm
And Epping Forest glades where we
Had beanfeasts with my father’s firm.

At huge and convoluted pubs
They used to set us down from brakes
In that half-land of football clubs
Which London near the Forest makes.

The deepest Essex few explore
Where steepest thatch is sunk in flowers
And out of elm and sycamore
Rise flinty fifteenth-century towers.

I see the little branch line go
By white farms roofed in red and brown,
The old Great Eastern winding slow
To some forgotten country town.

Now yarrow chokes the railway track,
Brambles obliterate the stile,
No motor coach can take me back
To that Edwardian “erstwhile”.