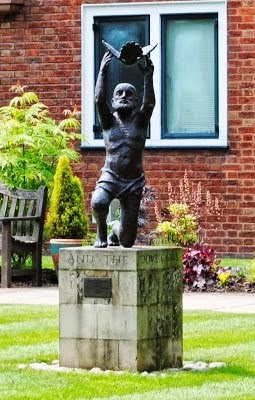 Noah and the Dove (2006) by Simon Manby in the courtyard of Saint John’s Hospital, Lichfield

Noah is a common and popular theme for Advent. The lectionary readings for Advent this year began on the First Sunday of Advent [1 December 2013] with the Gospel reading (Matthew 24: 36-44) in which Christ talks privately to the Disciples on the Mount of Olives about his Second Coming, comparing “the days of Noah” with the coming of the Son of Man.

The story of Noah and the Dove was then read the following day in the Daily Lectionary of the Church of Ireland (Genesis 8: 1-19). Another Dove, representing the Holy Spirit, figures in last Sunday’s Gospel account of the Baptism of Christ by Saint John the Baptist in the River Jordan (Matthew 3: 12).

I began this series of meditations on Art for Advent on 1 December by looking at Noah’s Ark (1846) by Edward Hicks, which is in the Philadelphia Museum of Art.

I am returning to this theme this morning, not with a painting but with a sculpture that draws together the stories of Noah and the Dove, and the Dove at the baptism by Saint John the Baptist.

The statue of Noah and the Dove (2006) by Simon Manby stands in the courtyard of Saint John’s Hospital, Lichfield. The courtyard is reached from Saint John Street though a covered archway. The courtyard is enclosed by the Chapel, the Master’s House, the East Wing dating from 1495 and comprising the original almshouses, and the West Wing, added in 1966 and designed by Louis de Soissons.

The gardens are a tranquil escape away from the hustle and bustle of the city, from the more formal gardens, nearer to Saint John’s Hospital buildings, the Master’s lawn, through to the informal gardens that lead away from the buildings. The gardens also house a section of the Monks’ Walk which would have linked Saint John’s to the Franciscan Friary, the remains of which are just opposite the library.

The sculptor Simon Manby was born in Buckinghamshire 1942, into a family of artists: his father, RM Manby, was an architect of Scottish and Derbyshire descent; his mother, Judith Da Fano, was a distinguished Lakeland artist whose own mother, Dorothea Landau, was a late Pre-Raphaelite painter and sculptor.

Simon Manby was brought up in Newcastle-upon Tyne and the Lake District, and educated at Gordonstoun. He studied sculpture at Edinburgh College of Art under Eric Schilsky and he then lectured in sculpture at Stoke College of Art. He left in 1972 to work with his wife, the painter Lee Mackay, both as freelance artists.

His early figurative work gradually led him to simplified and abstracted use of the human form in larger scale carvings in wood and stone. In the early 1990s, he turned again to working mainly in clay in order to have the sculpture cast in bronze.

Simon Manby’s statue of Noah and the Dove was commissioned by the trustees of Saint John’s Hospital in 1996. He created his statue of Noah and the Dove in his studio set in the Weaver Hills in North Staffordshire. The statue depicts the dove returning to Noah with a freshly-plucked olive branch in her beak, symbolising spiritual strength and peace in the evening of life as the waters of the floods subside (Genesis 8: 11).

In his commentary on this statue in his history of Saint John’s Hospital, the former Master, Canon Roger Williams, quotes this passage:

Love is strong as death ...
Many waters cannot quench love,
neither can the floods drown it. (Song of Songs 8: 6-7).

Tomorrow: ‘The Kiss’ by Gustav Klimt.