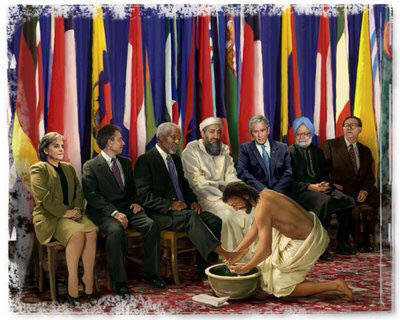 Loving our enemies ... so that we may be children of our Father in heaven

[Jesus said:] ‘You have heard that it was said, “An eye for an eye and a tooth for a tooth.” But I say to you, Do not resist an evildoer. But if anyone strikes you on the right cheek, turn the other also; and if anyone wants to sue you and take your coat, give your cloak as well; and if anyone forces you to go one mile, go also the second mile. Give to everyone who begs from you, and do not refuse anyone who wants to borrow from you.

‘You have heard that it was said, “You shall love your neighbour and hate your enemy.” But I say to you, Love your enemies and pray for those who persecute you, so that you may be children of your Father in heaven; for he makes his sun rise on the evil and on the good, and sends rain on the righteous and on the unrighteous. For if you love those who love you, what reward do you have? Do not even the tax-collectors do the same? And if you greet only your brothers and sisters, what more are you doing than others? Do not even the Gentiles do the same? Be perfect, therefore, as your heavenly Father is perfect.’

The Gospel reading for Sunday week continues our readings from the Sermon on the Mount. This section has often been misused and misinterpreted.

I wonder how often this reading has been a crippling burden on new disciples as they seek to live out their Christian faith? “Love your enemies and pray for those who persecute you” – now that’s a tough one for everyone. But what about: “Be perfect, therefore, as your heavenly Father is perfect”? That’s seemingly impossible.

As for the suggestion, “Do not resist an evildoer,” how often has this left someone to become a doormat, or used to tolerate domestic violence or to forgive constant physical or psychological abuse, to keep people from turning to revolution and resisting oppression?

The translation, “Do not resist an evildoer,” fails to convey the full meaning of the underlying Greek. The word ἀνθίστημι (antheestimee) speaks of setting oneself against something, withstanding, resisting or opposing it. But it might better be translated as, “Do not violently resist an evildoer.” The teaching here is primarily about nonviolence, but it is not about acquiescence to evil.

In fact, Christ then goes on immediately to offer three clear examples (verses 39-41) of how to nonviolently resist an evildoer – in fact, how to publicly shame and mock an evildoer.

These passages are tragically misinterpreted because we have forgotten the original society in which Jesus gave these teachings. When Christ says, “If anyone ...,” he and his listeners knew instantly who that “anyone” was. He describes three types of insulting and humiliating behaviour: slapping someone on the right cheek (verse 39), suing them in court for their personal goods (verse 40), and forcing them to go a mile (verse 41). These are not the kind of things anyone, just anyone, could do. They are the kind of things only a privileged few could do – and did – to the sort of people who were in the crowd listening to Christ that day.

Let’s look at each of these in turn

In order to preserve one’s honour – to preserve one’s public standing – it is crucial everything must be done according to the socially accepted protocols. The slave must obediently stand facing the master without external coercion. The master must strike only the right cheek; and only with the back of the right hand. Any variation on this would show that he was not in control; it would be a public loss of face.

Now imagine your boss has just slapped you on your right cheek; without saying a word, you then silently turn your head to expose your left cheek. It appears that you are becoming doubly subservient; doubly accepting his authority over you. But in this one movement you have made him powerless.

Turning your head hides your right cheek and presents your left cheek. But the angle of your head is such that the master can see, but cannot strike your left cheek with the back of his right hand. Try to mimic this now in this group, with the person beside you, and see what happens.

A move like this would publicly expose the master to shame and ridicule. You would appear to be meek and servile, obediently waiting for a second blow. But he would be totally helpless. He has three options: to hit you with the palm of his right hand; to use his left hand; or to walk away. To choose any one of these three options means he would lose face.

to sue you: Peasants did not sue one another. Again, this example of public humiliation is one about the abuse of the poor by those with power and privilege. Most peasants only owned the clothes on their backs.

What is being sued for here is not a coat, but a χιτών (chitón), which is an undergarment, usually worn next to the skin. To be sued for my coat would be humiliating enough; to be sued for my underwear would be truly humiliating. I would have nothing left to stand in. Going naked would be a radical way of exposing, laying bare, the shame which allows someone with wealth and privilege to take away the only thing a poor person owns.

forces you to go one mile: In those days, soldiers were allowed to conscript civilians to carry their packs, but only for a mile. However, this was no minor inconvenience for someone who depended on their work to feed and clothe his family. Walking a mile with a heavy pack and then having to walk back again would mean missing that day’s work, that day’s pay, and the food that would have paid for.

Offering to go a second mile would relieve another of this unjust burden, but at the same time it would publicly expose the unjust hardship of being forced to go even one mile. Yet it does so in a way that seems to co-operate while at the same time bringing shame and ridicule on the person who is forcing you to bear unfair burdens.

Christ tells us to treat all who entreat us as if they were our closest family. This surely breaks down the customary social barriers between the haves and the have-nots, it changes the social relationship to one of kinship. But when we come to God, begging and pleading, do we not come as children come to their father?

“Love” and “hate,” at the time of Christ, were not understood in terms of internal emotional feelings, or attitudes. He is not asking us to romantically or unquestioningly love our enemies.

At the time of Christ, people his not understand love and hate in Jungian or Freudian psychological terms. They were internal states that had immediate connotations of corresponding external expressions.

The word ἀγαπάω (agapao) conveys ideas about welcoming others, entertaining them, seeking their better good, to be happy for them, to be contented with the blessings they have received. Μισέω (miséo) means to hate in the sense of detesting.

To love our enemies does not mean to have romantic feelings for them, or to consider marrying them. It means to be attached to them, to be devoted to them, to be loyal to them, to seek their better good, to hope that they are treated fairly and justly. And to do that truly, our outward behaviour towards them must reflect our inner feelings.

Perhaps it would be easier merely to like them rather than to hope for the best for them.

If we are kind only to those we are close to, are we not we simply repeating what those we hate also do? Where is the merit in doing that?

To be children of God is to be perfect enough.

Canon Patrick Comerford is Director of Spiritual Formation, the Church of Ireland Theological Institute. These notes were prepared for a Bible study in a tutorial group with NSM and MTh students on 12 February 2011
Posted by Patrick Comerford at 09:45 No comments: