Women bishops in the Church of England 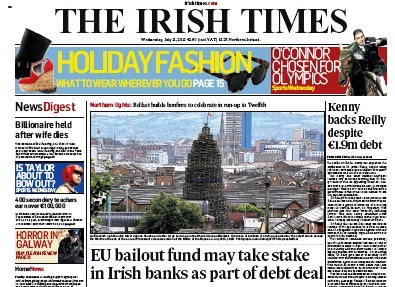 The Irish Times carries the following editorial on its leader page this morning [11 July 2012]:

THE CHURCHES seem to have an innate ability to shoot themselves in the foot at present. The Catholic Church has of late struggled terribly with issues surrounding clerical sex abuse and women’s ministry. The Church of Ireland likewise in May when its General Synod appeared to vote in favour of prejudice against gay clergy. Now many are asking whether the Church of England has shot itself in the foot too by postponing a vote on women as bishops.

Most dioceses in the Church of England – 42 out of 44 – have already approved proposals for women bishops. This week, however, the General Synod voted to wait until November to make any decision on women bishops. The true effect of the manoeuvre was to frustrate a move presented by bishops as an eleventh-hour compromise but one that would allow parishes to seek oversight from male bishops where a diocese has a woman bishop.

The Church of England falls far behind many other Anglican churches in making decisions on women’s ministry. When the General Synod rejected the ordination of women in 1978, Una Kroll famously cried from the gallery: “We asked for bread and you gave us a stone.” When women were eventually ordained to the priesthood in the Church of England in 1994, the Church of Ireland was already ordaining women priests since 1990. Since Barbara Harris was consecrated in 1989, women have become Anglican bishops in Australia, New Zealand, Canada and the United States. The Church of Ireland faces a series of episcopal elections later this year, and could possibly have its first woman bishop within the next 12 months.

This week’s decision is a setback for Archbishop Rowan Williams ahead of his retirement from Canterbury. Yet it may not be giving women a stone instead of bread. What was presented by the bishops as a concession and a compromise would enshrine discrimination and prejudice, potentially reducing any woman bishop – and any man who ordains women or who is ordained by a woman – to a second-class category. The same amendment would have been unpalatable had it pandered to anyone who rejects foreign-born bishops, black bishops or divorced bishops. When a woman becomes a bishop, she must be a bishop on the same terms as her male counterparts. Bishops are charged with being the focus of unity in their dioceses, and any “opt-out” clause that diminishes that role makes the prejudice of some more important than the unity of the church.

Posted by Patrick Comerford at 08:58 No comments: