Saint Patrick’s Day traditionally provides a welcome break in the middle of Lent from resolutions to observe the spiritual practices of discipline and self-denial. And when it falls at a weekend, it provides a good excuse for many for their first weekend away after the dark days of winter.

I think some of our family, friends and neighbours may be surprised that these Lenten disciplines are also recommended in The Book of Common Prayer and are part and parcel of Anglican tradition.

Indeed, some are even surprised to realise that Saint Patrick is part and parcel of the Anglican tradition too.

Hundreds of Saint Patrick’s Day celebrations are taking place worldwide today. And later on this day, in almost every city, town and village on this island, you will need to have your wits about you as you collide into drunks and revellers.

Writing some years ago in the Word magazine, Professor Vincent Twomey of Maynooth said that ‘it is time to reclaim Saint Patrick’s Day as a church festival.’ He questioned the need for ‘mindless, alcohol-fuelled revelry,’ and argued that ‘it is time to bring the piety and the fun together.’

We cling onto Saint Patrick’s Day as if everything we think, say and do in regard to the patron saint’s day is part of sacred, national myth. People who say things like Vincent Twomey said some years ago are dismissed as myth-busters, killjoys and spoilsports.

Let me share 10 things many do not know about Saint Patrick’s Day:

1, Saint Patrick’s Day does not date back to Saint Patrick’s days. It is only a feast day in the calendar of the Western Church since the mid-17th century, thanks to Luke Wadding (1588-1657), a Franciscan theologian from Waterford who founded Saint Isidore’s, the Irish College in Rome. He claimed Saint Patrick had died on 17 March, and encouraged his students to remember him on that date each year. But, until then, the commemoration was almost unknown, even in Ireland.

In 1629, Pope Urban VIII asked Luke Wadding to reform the church calendar, his cousin, Patrick Comerford, Bishop of Waterford and Lismore, wrote to him, stressing the importance of including Saint Patrick in any new list of saints: ‘For your life … endeavour that at least a semi double be accorded to Saint Patrick.’ And so 17 March entered into the official Christian calendar as a feast day in 1632.

4, The Cork village of Dripsey has the world’s shortest parade – a total of 23.4 metres from one pub to another at each end of the village. But the Dublin parade only dates from 1931. It began as a military parade, and its present form, with bands and music, only dates from 1970.

6, At first, the Church of Ireland Gazette strongly opposed Saint Patrick’s Day becoming a public national holiday … because it would lead to too much drinking.

7, The Gaelic League, formed by Douglas Hyde, the son of a Church of Ireland rector, also campaigned to have pubs shut on 17 March. One TD said ‘the drowning of the shamrock’ was ‘a direct insult to the saint.’ A senator claimed Saint Patrick would drown anyone drowning the shamrock. Countess Markievicz wanted hotels to stay dry too, declaring: ‘I do not see why rich people should not be kept off their drink as well as poor.’

8, When the law eventually forced pubs to shut in 1927, TDs were still worried about sales of wine from chemists and so-called ‘dairy shops.’ One politician was worried about women getting prescriptions filled and slipping a sly bottle of port into their handbags.

9, From 1927 until 1961, the Dog Show at the Royal Dublin Society was the only place to legally drink alcohol on Saint Patrick’s Day. Huge crowds turned up. One TD complained it was a grand occasion ‘except for all the dogs.’

10, For decades, all broadcast advertising was also banned on 17 March, which was filled with traditional music, religious services and speeches such as Eamon de Valera’s address in 1943 when he spoke of ‘happy maidens dancing at the crossroads.’

If in the past in the Church of Ireland we were not good at owning Saint Patrick’s Day, then we were not good either at owning the Old Testament Apocryphal readings in the lectionary, such as this morning’s reading from the Book of Tobit.

The Book of Tobit is replete with the commandments and wisdom of God as well as parallels with the story of Christ – the only Son who is sent by the Father to redeem a Bride from death. This story has inspired an oratorio by Handel, and many great works of art – by Rembrandt, Jan Steen, Abraham De Pape, Jan Massys, Barent Fabritius, Bernardo Strozzi, Pieter Lastman, Gerrit Dou … and so on.

There is even a stained glass window depicting Tobias and the Fish in Whitechurch Church of Ireland parish church in Rathfarnham, given by Don Tidey in thanksgiving for being freed from his kidnapping.

Perhaps we could make some connections between this reading and the National Apostle whose life and mission we are celebrating today:

So, before we go on to celebrate the rest of Saint Patrick’s Day, and to enjoy ourselves today, let us take to heart Vincent Twomey’s recent comments as a timely reminder that the central truths of the faith Saint Patrick preached on this island – the life, passion, death and Resurrection of Christ – are more important than any commemoration – secular, civic or religious – of the saint’s life.

Let us, like Saint Paul and Saint Patrick, let us enter into the labours of those who have gone before us (John 4: 38) and seek to ‘Let light shine in the darkness … to give the light of the knowledge of the glory of God in the face of Jesus Christ’ (II Corinthians 4: 6).

(The Revd Canon Professor) Patrick Comerford is Priest-in-Charge, the Rathkeale and Kilnaughtin Group of Parishes. This sermon was prepared for the Saint Patrick’s Day Eucharist in Saint Mary’s Church, Askeaton, Co Limerick, on 17 March 2017.

An announcement in
‘The Church Times’ 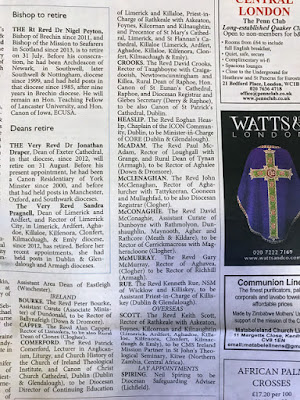 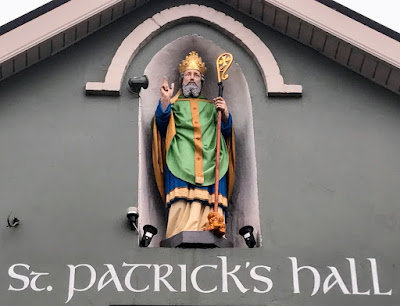 ‘May all know the blessings of God’s provision’ … a statue of Saint Patrick on the façade of Saint Patrick’s Hall on William Street, Listowel, Co Kerry (Photograph: Patrick Comerford, 2017)

Today is Saint Patrick’s Day [17 March 2017], and I am marking the national saint’s day by presiding and preaching at the Eucharist in Saint Mary’s Church, Askeaton, Co Limerick, this morning (11 a.m.). Later in the day I hope to attend the Saint Patrick’s Day parade in either Rathkeale or Askeaton.

In Ireland, Saint Patrick’s Day traditionally marks a welcome break in mid-Lent from the discipline and self-denial that are part of Lenten practices for many.

This week, from Sunday (12 March) until tomorrow (18 March), the USPG Lent Prayer Diary follows the topic ‘How shall we live.’ The topic was introduced on Sunday in an article in the Prayer Diary by Maropeng Moholoa, of the Anglican Church in Southern Africa, who oversees a USPG-supported community development programme in Lesotho.

Give thanks for the church’s engagement with vulnerable and marginalised communities. May all know the blessings of God’s provision.