Remembering war in the hope
‘there is not another like it’ 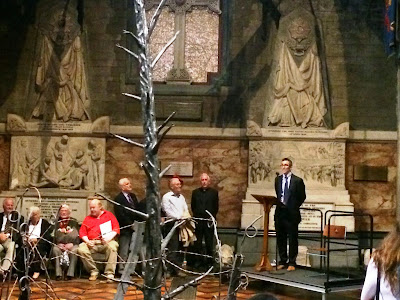 I was in Saint Patrick’s Cathedral, Dublin, last night [28 July 2014] for the unveiling of the Tree of Remembrance by the author Jennifer Johnston and the opening of the “Lives Remembered” exhibition in the North Transept.

Surrounded by poppy wreaths, war memorials and regimental flags from the past, she declared: “We have just been through the most terrible century and we must hope there is not another like it.”

Several hundred people were in the cathedral last night and heard the cathedral education officer, Andrew Smith, pay tribute to ironworks Bisgood Bagnall, who he developed his idea with to make it a reality. Andrew said the tree symbolised “an incredibly important moment in European history” and was a counterpoint to the Tree of Life in the stained glass window above it.

Visitors are invited to tie a message to the tree, and last night I wrote message remembering my grandfather, Stephen Comerford (1867-1921), who joined the Royal Dublin Fusiliers – “the Toughs and Tuffs” – in 1915.

Within days, my grandfather was sent to the Greek island of Lemnos and on to Gallipoli and Suvla Bay. He was among the few survivors evacuated to Thessaloniki. In the severe Greek winter, many of them suffered frostbite, dysentery and other sicknesses. In the summer’s heat of 1916, more came down with malaria and were evacuated from Thessaloniki.

Stephen was discharged on 3 May 1916, three days after the Easter Rising ended, and was sent back to Dublin. Malaria was life-threatening but life-saving – for a few months at least. The war ended on 11 November 1918 and a month later, on 14 December, his youngest child – my father Stephen Edward Comerford – was born in Rathmines. Later, Stephen was decorated with the three standard medals – the Victory Medal, the British Medal and the 1914-1915 Star. But his health continued to deteriorate, no more children were born, and he died alone in hospital at the age of 53.

He is buried in Saint Catherine’s, the old Church of Ireland churchyard in Portrane in north Co Dublin. Ironically, his gravestone also gives the wrong age for him at the time of his death. Stephen Comerford was born on 28 December 1867, and died on 21 January 1921 at the age of 53. But the gravestone says he died at the age of 49 – the age he was when he came back from the war in 1916. As his health deteriorated, he must have remained 49 for ever in my grandmother’s heart.

His widow, my grandmother Bridget (Lynders), continued to live in Rathmines until 1935, when she moved to Ashdale Park, Terenure. When she died on 25 March 1948, she was buried with my grandfather in Portrane, close to other members of the Lynders family. 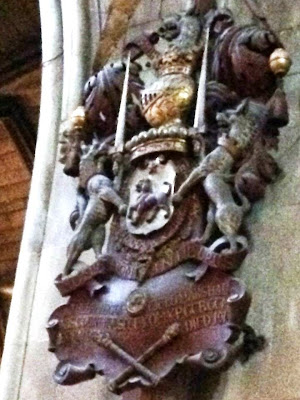 Last night, in the north transept of Saint Patrick’s, I found myself standing beneath the monument to Field Marshal Lord Wolseley (1833-1913), whose family name is associated with Wolseley in Staffordshire and Mount Wolseley, Co Carlow. He was born in Golden Bridge House, near Kilmainham, Dublin, became commander-in-chief of the British army, and retired as Master of the Royal Hospital, Kilmainham.

Dean Victor Stacey explained last night that Jennifer Johnston’s father, the playwright Denis Johnston, is buried in the cathedral graveyard, and that she is a descendant of a former dean, Archbishop John Henry Bernard. But she was also invited to open the exhibition because this year marks the fortieth anniversary of her novel How Many Miles to Babylon?, which tells the story of two Wicklow boys who enlisted in World War I. Her uncle, Billy Richards, died in Gallipoli in August 1915. 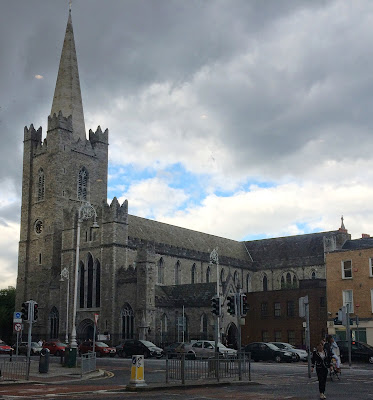 Jennifer Johnston quoted also from ‘Lament for Thomas MacDonagh,’ a poem by the war-time Irish poet Francis Ledwidge, who died in World War I:

He shall not hear the bittern cry
In the wild sky, where he is lain,
Nor voices of the sweeter birds,
Above the wailing of the rain.

Thinking last night of my grandfather on Lemnos and of the war-time poetry of Francis Ledwidge, I also found myself thinking of another war-time poet, Rupert Brooke, and his connection with Lemnos.

Rupert Brooke and his division arrived at Lemnos on the hospital ship HMS Grantully Castle on 12 March 1915. On Thursday 18 March, they left Mudros Habour for the Dardanelles. But after several hours of inactivity, they were withdrawn and returned to Lemnos.

On their return, they found Mudros Harbour was full of the ships for the impending landings. For a week there were days ashore, strolling Myrina or through the orchards where the almond trees were in blossom. On Lemnos, Brooke thought he could see far of Mount Olympus with his strong field glasses.

He and his fellow officers, who called themselves the Latin Club, talked of classical Greece, of Homer, of Philoctetes, the archer bitten by a snake on Lemnos, of the resistance on Lemnos to the invading Miltiades. One of them exclaimed: “I shall take Constantinople and avenge the Byzantine Empire.”

Brooke wrote in a letter home: “We read Homer to each other, and drift among the Isles of Greece ... by the wine dark sea.”

They left Lemnos on 24 March bound for Egypt. By 2 April Brooke was sick with sunstroke and dysentery and was bitten on the lip by a mosquito. On 10 April, Brooke and the division left for Lemnos again, but they were diverted to Skyros.

Brooke arrived on Skyros on 17 April. On 20 April, during a long day on the island, they rested in the olive grove where his grave now stands: Brooke remarked on “the strange peace and beauty of this valley.” He seemed to have recovered from his illnesses, but he began to fall seriously ill that evening.

As a consequence of his mosquito bite in Port Said, he had developed blood poisoning. On 22 April, he was moved to a French hospital ship moored in Tresboukis Bay, off Skyros. It was waiting for the injured from Gallipoli, and he was the only patient on board, cared for 12 doctors and surgeons. On 23 April, his temperature rose and he lost consciousness. He died late in the afternoon, and was buried at 11pm in an olive grove on the island. He was 27.

Rupert Brooke is famous as one of Britain’s war poets – along with Siegfried Sassoon, Wilfred Owen and others. In some ways, his poems reflect the terrible naivety or innocence of the early days of World War I. One of his best-known poems is “V: The Soldier” which was published by The Times (London) on 11 March 1915, and was read from the pulpit of Saint Paul's Cathedral on 4 April 1915, less than three weeks before Brooke died, by Dean William Inge as part of his Easter Day sermon:

If I should die, think only this of me:
That there’s some corner of a foreign field
That is for ever England. There shall be
In that rich earth a richer dust concealed;
A dust whom England bore, shaped, made aware,
Gave, once, her flowers to love, her ways to roam,
A body of England’s, breathing English air,
Washed by the rivers, blest by suns of home.

And think, this heart, all evil shed away,
A pulse in the eternal mind, no less
Gives somewhere back the thoughts by England given;
Her sights and sounds; dreams happy as her day;
And laughter, learnt of friends; and gentleness,
In hearts at peace, under an English heaven. 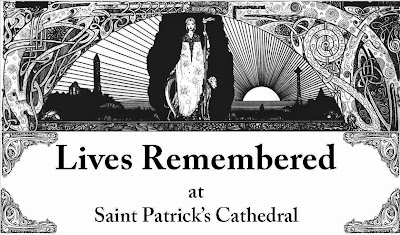 Posted by Patrick Comerford at 11:02 No comments: