With the Saints through Advent (5): 4 December, Saint John of Damascus and Saint Barbara 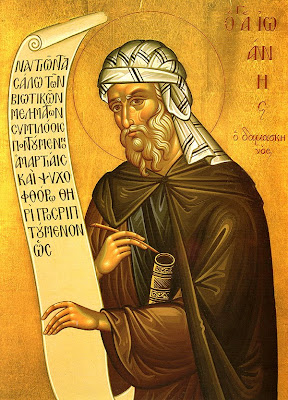 Saint John of Damascus ... ‘the last of the Fathers’

As we continue to recall the saints of Advent, today [4 December] commemorates two saints of the East, Saint John of Damascus and Saint Barbara.

Saint John of Damascus was a great defender of the orthodoxy of the Christian faith against the prominent heresies of the day and against Islam. Saint Barbara is the patron saint of miners and of many military forces. But while Saint John is a considerable figure in Church History, there are considerable doubts about the historicity of the stories associated with Saint Barbara.

Saint John of Damascus, ‘the last of the Fathers’ 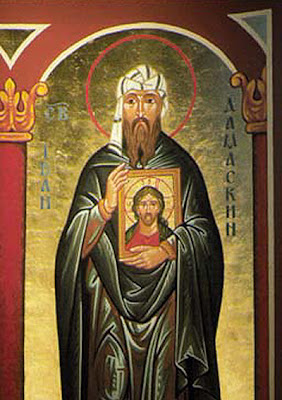 Saint John of Damascus is commemorated on 4 December in the calendars of the Eastern Orthodox and Roman Catholic churches, and in the calendars of many Anglican Churches, including the Episcopal Church and the Calendar in Common Worship in the Church of England.

Saint John of Damascus (Ἰωάννης ὁ Δαμασκηνός), also known as Saint John Damascene or Χρυσορρόας (Chrysorrhóas, “streaming with gold” or “the golden speaker”) was a Greek-speaking Syrian monk and priest, who wrote on a wide variety of subjects, including theology, philosophy, mathematics, medicine, law and music.

Saint John was born into a prominent family known in Damascus ca 655. Some accounts say his grandfather Mansur bin Sarjun (Sergius) was the Arab governor who surrendered Damascus to the Muslims. The late 7th century court of the Umayyad Caliphs in Damascus had a large number of Christian civil servants, including John’s grandfather and father.

Saint John had a Greek education and his tutors included Cosmas, a monk from Sicily who had been kidnapped by Arabs. When the Iconoclastic Conflict tried to abolish the veneration of the icons in the early 8th century, John of Damascus – by then a writer in the caliph’s court – wrote three spirited defences of icons.

He wrote in the First Homily in Defence of the Holy Icons:

In times past, God, without body and form, could in no way be represented. But now, since God has appeared in the flesh and lived among men, I can depict that which is visible of God ... [for Christ is “the image of the invisible God” (Colossians 1: 15).] I do not venerate the matter but I venerate the Creator of matter, who became matter for me, who condescended to live in matter, and who, through matter accomplished my salvation; I do not cease to respect the matter through which my salvation is accomplished..

He left his position at the caliph’s court ca 725 to become a monk at the Monastery of Mar Saba near Jerusalem, ten miles south of Jerusalem, and he was ordained priest there in 735.

His most important work is his three-part Fount of Knowledge, which includes his comprehensive defence of the Orthodox Faith. This is one of the most important single works produced in the Greek Patristic period, offering an extensive and lucid synthesis of the Greek theological science of the period. It is the first great Summa of theology to appear in either the East or the West.

As well as his strong defence of icons, he wrote theological works and composed hymns that are still used liturgically in the Eastern Orthodox Church. Two of his hymns are included in the Church Hymnal of the Church of Ireland: ‘Come, ye faithful, raise the strain’ (No 262) and ‘The Day of Resurrection’ (No 283).

His writings include treatises defending Orthodox Christianity against many of the heresies of the day, including the Jabobites, Nestorians, Monophysites and Monthelites. He was fluent in Arabic and well-read in the Quran, and in one of the first Christian refutations of Islam, he describes Islam as the “Heresy of the Ishmaelites,” and compares it with Arianism.

Long after his death, his writings made an important contribution to the debates at the Second Council of Nicaea in 787. The council was called by the Empress Irene to settle the Iconoclastic Conflict, and its decision is celebrated in the Orthodox Church as “The Triumph of Orthodoxy.”

In the Eastern Orthodox Church, he is considered “the last of the Fathers.” The Roman Catholic Church reveres him as a Doctor of the Church.

A hymn of Saint John of Damascus:

Spurn me not for all it says,
Not for words and not for ways,
Not for shamelessness endued!
Make me brave to speak my mood,
O my Jesus, as I would!

Or teach me, which I rather seek,
What to do and what to speak.

Hold dominion over my heart, O Lord: keep it as your inheritance. Make your dwelling in me, along with the Father and the Holy Spirit. Widen in me the cords of your tabernacle, even the operations of your Most Holy Spirit. For you are my God and I will praise you, together with the Eternal Father and your quickening Spirit, now, henceforth and forever. Amen.

O Lord and Master Jesus Christ, our God, who alone has power to forgive the sins of humanity, I pray to you, O Good One who loves humanity, forgive all the sins that I have committed in knowledge or in ignorance, and make me worthy to receive without condemnation your divine, glorious, immaculate and life-giving Mysteries; not unto punishment or unto increase of sin; but unto purification, and sanctification and a promise of your Kingdom and the Life to come; as a protection and a help to overthrow the adversaries, and to blot out my many sins. For you are a God of Mercy and compassion and love towards humanity, and unto you we ascribe glory together with the Father and the Holy Spirit; now and ever, and unto ages of ages. Amen.

I stand before the gates of your Temple, and yet I refrain not from my evil thoughts. But, O Christ my God, who justified the publican, and had mercy on the Canaanite woman, and opened the gates of Paradise to the thief; I pray you to open unto me the compassion of your love towards humanity, and to receive me as I approach and touch you, like the sinful woman and the woman with the issue of blood; for the one, by embracing your feet received the forgiveness of her sins, and the other by but touching the hem of your garment was healed. And I, most sinful, dare to partake of your whole Body. Let me not be consumed but receive me as you received them, and enlighten the perceptions of my soul, consuming the accusations of my sins; through the intercessions of her that without stain gave birth to you, and of the heavenly Powers; for you are blessed unto ages of ages. Amen. 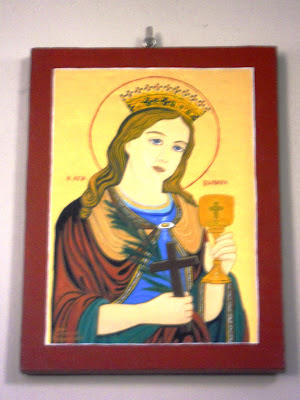 Saint Barbara ... an icon in a church in Rethymnon in Crete (Photograph: Patrick Comerford, 2012)

Saint Barbara, who is known in the Eastern Orthodox Church as the Great Martyr Barbara, sounds like a third century Rapunzel. She lived in what is now Turkey, the daughter of a rich man, Dioscorus, who kept her locked in a tower to protect her from unsuitable suitors – and also to keep her from becoming a Christian.

The tower had only two windows, but on his return from a journey, her father saw that there was a third window. When she was confronted, Barbara informed her father that she had been baptised by a priest, disguised as a physician, and that the third window had been added in honour of the Holy Trinity.

This enraged her father who denounced her as a Christian to the local authorities. They condemned her to death, but she escaped. She was captured by her father, who then beheaded her himself. Immediately afterwards, he was struck by lightning.

Saint Barbara is often depicted holding the tower in which she was imprisoned. While she was imprisoned in the tower, she kept a branch of a cherry tree in a bowl of water. On the day she was beheaded, legend says, the branch blossomed. This story is used to explain the central European custom of cutting a branch from a tree, usually a cherry tree, or perhaps an apple tree, on her feast day. These “Barbara branches” are placed in bowls of water in a warm room in the hope of the branch blossoming on Christmas Day.

In some places, the flowering branches are placed at the crib as a gift to the Christ Child and as a reminder that he is the Branch of Jesse. 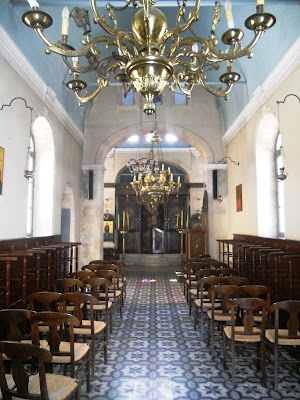 Inside the Church of Saint Barbara in Rethymnon, Crete (Photograph: Patrick Comerford, 2012)

Saint Barbara’s day or Eid ul-Burbara is celebrated on 4 December by Arab Christians in Syria, Lebanon, Jordan and Palestine in a feast day similar to that of Hallowe’en.

Her association with the lightning that killed her father has caused her to be invoked against lightning and fire; by association with explosions, she is also the patron of artillery and mining. She has also given her name to the city of Santa Barbara in California.