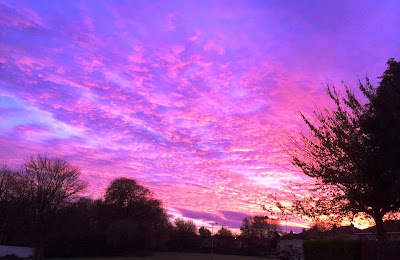 ‘Christ, her Sun, all ill dispelling / shines upon the morning skies’ … a recent sunrise in Knocklyon (Photograph: Patrick Comerford, 2014)

As part of my spiritual reflections for Advent this year, I am looking at an appropriate hymn for Advent each morning. This morning [15 November 2014], I have chosen the Advent hymn ‘Hark! a thrilling voice is sounding,’ translated from the original Latin in 1849 by Edward Caswall (Irish Church Hymnal, No 126).

Traditionally, this ancient Latin hymn has been attributed to Saint Ambrose, but it is more likely that it was written by one of his followers. It made its way into many of the Anglo-Saxon brevaries, and was appointed for use at Matins or Lauds each day throughout Advent.

Edward Caswall (1814-1878) was born on 15 July 1814 in Yateley, Hampshire, the son of the Revd Robert Clarke Caswall, Vicar of Yateley, and nephew of Thomas Burgess (1756-1837), Bishop of Salisbury. He attended Chigwell Grammar School, Marlborough School, and Brasenose College, Oxford, where he graduated with an honours BA in 1836, later proceeding MA. Before leaving Oxford, he published, under the pseudonym of Scriblerus Redivivus, The Art of Pluck, written in imitation of the style of Aristotle and a satire on the ways of the careless college student.

Caswall was ordained as a deacon in 1838 and a priest in 1839 in the Church of England. In 1840 he was appointed the Perpetual Curate or vicar of Stratford-sub-Castle near Salisbury. Soon afterwards, he came under the influence of John Henry Newman and the Tracts for the Times. He resigned his position in the Church of England, and in January 1847, was received into the Roman Catholic Church in Rome by Cardinal Acton.

Caswall’s wife, who had become a Roman Catholic with him, died suddenly of cholera in 1849. Within a year, he became an Oratorian and joined Newman at the Oratory of Saint Philip Neri at Edgbaston, near Birmingham. He was ordained priest in 1852 in the Roman Catholic Church, and until his death he lived at the Oratory, where he wrote most of his hymns.

Today, Caswall is best remembered as the translator of ancient hymns, although he also wrote original lyrics. Many of his translations are from the Roman Breviary and other Latin sources, marked by faithfulness to the original and by purity of rhythm. His works include: Sermons on the Seen and the Unseen (1846); Lyra Catholica (1849); The Masque of Mary, and Other Poems (1858); and The Catholic’s Latin Instructor in the Principal Church Offices and Devotions.

Caswall died in the Oratory, Edgbaston, on 2 January 1878 and is buried in Rednal, near Bromsgrove, close to John Henry Newman.

Caswall’s original opening line for this hymn in Lyra Catholica was: “Hark, an awful voice is sounding.” But this was changed when it was published in a hymnal in 1852.

The tune ‘Merton’ was composed by William Henry Monk (1823-1889), best known for ‘Eventide,’ which is used for the hymn ‘Abide with Me’ by Henry Francis Lyte.

Monk’s talents as a composer, arranger, and editor were recognised in 1857, when he was appointed the first musical editor of Hymns Ancient and Modern.

Stripped of some of your vesture
By Monk or another. Now you wore no frill,
And at first you startled me. But I know you still,
Though I missed the minim’s waver

In 1874, Monk was appointed Professor of Vocal Studies at King’s College. Later, he accepted similar posts at two other prestigious music schools in London, the National Training School for Music (1876) and Bedford College (1878). He remained active in composition in his later years, writing not only hymn tunes but also anthems and other works. In 1882 Durham University awarded him an honorary doctorate.

Monk died in London on 1 March 1889, and he is buried in Highgate Cemetery, near Christina Rossetti and many other famous Victorians.

Hark! a thrilling voice is sounding by Edward Caswall

Hark! a thrilling voice is sounding,
‘Christ is nigh,’ it seems to say;
‘Cast away the works of darkness,
O ye children of the day!’

Wakened by the solemn warning,
let the earthbound soul arise;
Christ, her Sun, all ill dispelling,
shines upon the morning skies.

Lo! the Lamb, so long expected,
comes with pardon down from heaven:
let us haste, with tears of sorrow,
one and all to be forgiven;

that when next he comes in glory,
and the world is wrapped in fear,
with his mercy he may shield us,
and with words of love draw near.

Honour, glory, might and blessing
to the Father and Son,
with the everlasting Spirit,
while eternal ages run.

Tomorrow: Hark, what a sound, and too divine for hearing