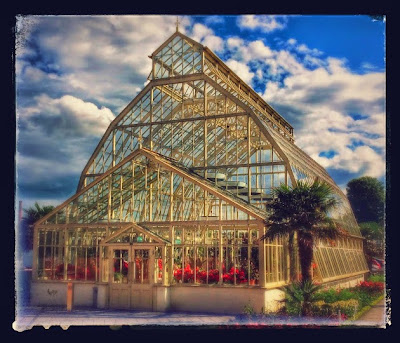 The Victorian glasshouses in the National Botanic Gardens, Glasnevin, are a visible lesson in planting seeds with hope for the future (Photograph: Patrick Comerford, 2014)

The Fourth Sunday after Trinity,

I like to explain this away by excuses such as heavy hay fever since childhood or claiming I do not have green fingers. But to tell the truth it may be because of a combination of faults: because I expect quick results and because I expect perfection.

I enjoy sitting in the garden, reading, eating in the open, listening to the fountain, but not wedding the flower beds, tending the plants or mowing the lawn.

But twice last weekend I found myself unexpectedly appreciating gardens and growing and growth: on Saturday afternoon visiting the National Botanic Gardens and on Sunday afternoon admiring the Lavender Field at Avoca in Kilmacanogue.

In both cases, these are places where people with vision did not expect immediate results.

The Botanic Gardens were founded in Glasnevin in 1795 by people with vision such as the Speaker of the Irish House of Commons, John Foster. But it was another 40 years or more before the basic shape of the gardens was established by 1838.

David Moore, who was appointed curator that year, had the vision to develop the glasshouse accommodation, and he commissioned Richard Turner, the great Dublin ironmaster, to provide an iron house to replace the previous wooden house.

Work on the main curvilinear glasshouse started in 1843. It was a vision for the future and a gift to the future. Those who planned it and devoted their energy to building those glasshouses in Glasnevin had no idea of the pleasure they were bequeathing to future generations, and today the glasshouses in the Botanic Gardens stand as a great achievement of Victorian engineering, planning and vision.

In many ways, the buildings they planned and the seeds sown in them have brought forth not just thirtyfold, but sixtyfold, a hundredfold, and perhaps even more.

Today, the living collections at the National Botanic Gardens include over 300 endangered species from around the world, and six species already extinct in the wild. These are a vital resource, and the staff there speak of them like a “Noah’s Ark” for the future.

In those glasshouses, Victorian architecture, engineering, art and science come together.

Without careful, measured, timing and proper planning we would not see the results today. 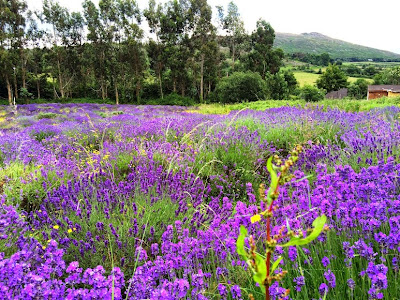 The Lavender Field, Kilmacanogue ... an example of planning carefully and reaping the benefits over the years (Photograph: Patrick Comerford, 2014)

The Lavender Field in Kilmacanogue, on the edge of the N11 outside Bray, is a more recent example of planning carefully and reaping the benefits in measured ways over the years.

The Lavender Farm owes its origins to Brian Cox and Donald Pratt, who had the idea in 1983 of starting an Irish perfume company, and moved to Kilmacangoue in 1987. Some of their fragrances are sourced from lavender from their own field, across the road from their offices in Kilmacanogue.

Thirty years later, this “field of dreams,” nestling between the two Sugarloaf mountains, is producing top quality lavender oil and provides the inspiration for many of the company’s ideas. The lavender is harvested every summer at this time of the year, and the Lavender Harvest Party celebrates nature’s amazing gift of the golden oil from the lavender. 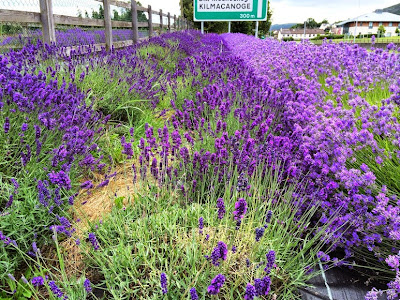 Some of the Lavender is growing on rocky waste and along the roadside (Photograph: Patrick Comerford, 2014)

Some of the lavender is actually growing along the roadside, even on the rocky waste left on the margins of the N11 as it is being converted into the M11. But without the seed that had fallen by the roadside and the rocky places, I might never have noticed the lavender that is growing on the deep, rich soil, and producing this abundant harvest.

Nonetheless, this lavender field has taken a generation to reach the maturity that is its glory today.

Too often we expect immediate results. And too often we judge whether a project is a success or a failure by asking whether it is producing immediate, measurable, visible apparent results. If not, we dismiss that project as an immediate failure.

In our Old Testament reading this morning (Genesis 25: 19-34), Rebekkah first of all does not expect to be pregnant – she is married for 20 years and Isaac is 60 before she conceives. To add to her surprise after all those years, she finds she is pregnant not with one child but with two, twin boys.

Their father Isaac does not expect Jacob to grow and become his heir.

Instead, Esau is the hunter gatherer, while Jacob seems to be the stay-at-home boy, “Mammy’s boy,” with a hint that he is good at stirring up trouble (see verse 29).

Esau expects immediate results, to the point that he is willing to give up his long-term prospects, his rights and inheritance as the first-born son, for the immediate satisfaction of lentil stew Isaac has been cooking.

Esau expects immediate results. He lacks the patience to wait and see what may happen, he does not have the ability, the commitment or the endurance to stick with things.

The Psalmist too is challenged to consider his own need for patience and endurance, to see not his immediate predicament but to look to the future. He thinks he is a failure because of his present circumstances, but does the rejection he feels today shape the tomorrow he faces?

Psalm 119 is the longest of the psalms, and is made up of 22 eight-line stanzas. This morning’s portion (verses 105-112) is the fourteenth of these stanzas. In Hebrew, each line begins with the letter nun, the fourteenth letter in the alphabet.

Perhaps the dominant theme running through this stanza is need for patience and determination. The psalmist stands up against “the wicked”, who oppose God’s ways and have set a trap. The psalmist is “deeply troubled” (verse 107), perhaps by the insults and innuendos hurled at him the ungodly (verse 110). Yet he learns patiently in the face of these immediate risks to his life (verse 109) to remain in awe of God.

He has an inheritance that is not only for the here and now, but for future generations, for ever (verse 111), and for ever and to the end (verse 112).

In the face of adversity, this is his real joy, even though he may not see the fruits of his faithfulness, it will be of benefit to future generations.

It is not the fault of the seed that it has fallen on rocky soil, or landed on the roadway, or been burned up in the mid-day sun. God scatters where he will, abundantly and generously.

On the other hand, we can achieve little by our own innate qualities or abilities. We are all inter-dependent – just like the seed, which depends on soil, sun, rain and the right conditions.

Why does some of the seed yield better results? – some of it is immeasurably better than that other seed.

Growth occurs without us seeing or knowing it. Yet we can have such limited expectations of God.

Why does God allow certain people to do this, that or the other?

Why does God allow particular people or nations to prosper?

Why does God seemingly reward the wayward and the careless, those I who would prefer to see left on rocky soil or would pass by on the side of the road?

If only God behaved a little more like I do, or like I want him to, would this not be a far, far better world?

Would this not be a far, far better society?

Would this not be a far, far better Church?

Isaac and Rebekkah, and Jacob too, do not see the working out of God’s plans in future generations. Like the sower who sows so that others may reap, how could Isaac and Rebekkah know what Jacob’s bowl of lentils would lead to?

At the moment, we are very exercised about Church attendance figures in the Church of Ireland and about growth and Church planting.

As we plan and work on new church plants to reach the unchurched, I sometimes, just sometimes, wonder whether we are already neglecting our own inheritance, the harvest of the seeds that have already been planted, the promise that was made to past generations.

The most recent census figures across the island show that about 378,000 people claim affiliation with the Church of Ireland – 249,000 in Northern Ireland and 129,000 in the Republic. But the average attendance at Sunday worship, according to figures based on an exercise last November, is 58,000 people – 15% of those identifying themselves as Church of Ireland in the census returns in 2011.

As the Archbishop of Armagh, Archbishop Richard Clarke, says, “we need to think clearly about ‘long–term’ church and how best to make a positive witness and contribution to the community in all parts of Ireland over, say, the next twenty years.”

If we are going to look to the future, perhaps, and I am only saying perhaps, our first exercise in mission should be in building up our present congregations and parishes, in reaching out to the other 85% who think they have fallen on the pathway, on the rock soil or have been gobbled up by other fly-by Sunday pursuits.

There is hope. There is hope for our dwindling and small congregations. If we have hope in the seeds sown in the past, if we pay attention to the potential harvest, if we look with faith and hope to the future, first among the other 85%, then there is no reason to fret about present figures.

Like the Victorian engineers who had vision in Glasnevin almost two centuries ago, we may not see the growth that follows our work today. But there is no need to fear that small and dwindling congregations are setting the course for the future.

Let us not look for immediate and short-term growth today, but look to those who already have had the seeds of faith, and hope and love sown in them at their baptism, in their childhood, with their confirmation. And then, perhaps, we need not fret about the future.

Canon Patrick Comerford is Lecturer in Anglicanism, Liturgy and Church History, the Church of Ireland Theological Institute. This sermon was preached at the Parish Eucharists in Saint Michan’s Church, Dublin, and All Saints’ Church, Grangegorman, on Sunday 13 July 2014. 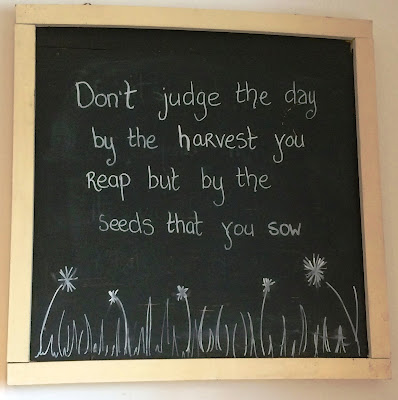