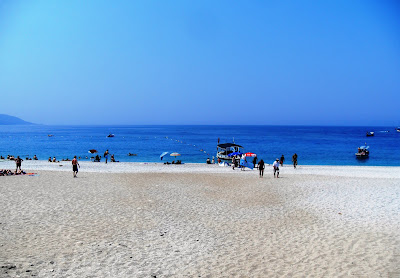 The beach at Ölüdeniz ... the most photographed beach in Turkey (Photograph: Patrick Comerford, 2011)

I spent most of the day at the beach yesterday. From Ovacik, it was a short journey on the dolmus to the beautiful beach at Ölüdeniz, which is famous for its shades of turquoise and aquamarine.

The beach is frequently rated among the top five beaches in the world by travellers and tourism journals.

The beach at Ölüdeniz appears on posters and advertising throughout the world, promoting beach-and-sun holidays in Turkey. The advertising is clever rather than misleading – this is hardly a typical Turkish beach, with its white pebble-sands and the azure waters of its blue lagoon, and Turkey’s Aegean coastline is richly endowed with smaller, hidden, beautiful and less-publicised beaches.

But if the advertising is clever rather than misleading, then the name is misleading rather than clever, for the name Ölüdeniz literally means Dead Sea, yet it is lively and attractive.

Ölüdeniz is reached by a steep winding road, lined with pine trees and groves. As the dolmus descends the road from Fethiye, a panorama of the bay and the beach below opens dramatically.

The bay lies 14 km south of Fethiye, beneath the high, steep side of Babadağ Mountain, famous for its paragliding opportunities. Although this is one of the most photographed beaches on the Mediterranean, it has maintained its image as a secluded sandy bay and lagoon. Despite publicity, popularity and its lengthy beach, this is a small resort, saved because it is also a national nature reserve and building is severely restricted. 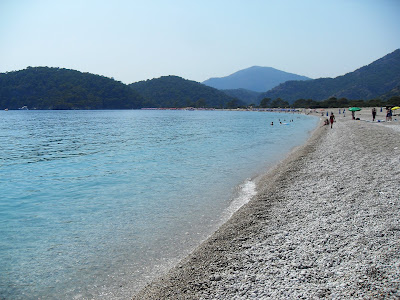 The white pebble beach and the blue waters of Ölüdeniz in the sunshine (Photograph: Patrick Comerford, 2011)

The photographs are deceptive too because the dazzling white in the photographs is created by pebbles rather than sand, making it difficult to walk into the water to swim. But I managed today – despite the tingling under my feet and the joint pains in my knees. 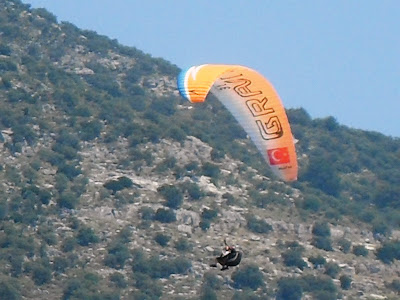 Paragliding against the backdrop of steep side of Babadağ Mountain above Ölüdeniz (Photograph: Patrick Comerford, 2011)

Later in the afternoon, after lunch in a bar on the beach, it was pleasant to while away a few hours watching the pleasure boats going in and out with tourists visiting nearby bays and islands, looking up at the paragliders – at any one time there were at least half a dozen above – and listening to gentle waves of the aquamarine water rolling in against the white pebbles.

Then it was time to return to the hotel and get ready to head out to watch the setting sun in Hisaronou and to have dinner in Yoruk Sofrasi restaurant on the road back to Ovacik.
Posted by Patrick Comerford at 06:00 No comments: