A journey through Lent 2016
with Samuel Johnson (1) 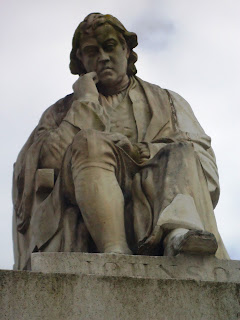 Today is Ash Wednesday and the beginning of Lent. Later this morning [10 February 2016], I am on an Ash Wednesday retreat in Maynooth, Co Kildare.

During Lent this year, I am planning to take time each morning to reflect on words from Samuel Johnson (1709-1784), the Lichfield lexicographer and writer who compiled the first authoritative English-language dictionary.

Johnson was generally negative about religious verse and his own devotional poems, marked by earnestness and humility, were composed mainly in his later years. There are several meditations and seven Latin prayers, the majority of them based on the Collects in The Book of Common Prayer.

David Nichol Smith, in Samuel Johnson's Poems, says these verses “are preserved for us in sufficient numbers to rank [Johnson] as a religious poet, though a minor one.”

The Collect of Ash Wednesday in its traditional version in The Book of Common Prayer prays:

Almighty and everlasting God, who hatest nothing that thou hast made, and dost forgive the sins of all them that are penitent; Create and make in us new hearts, that we, worthily lamenting our sins and acknowledging our wretchedness, may obtain of thee, the God of all mercy, perfect remission and forgiveness; through Jesus Christ our Lord.

Johnson translates this into Latin as:

Translated back into English, this reads:

Almighty God, who dost always love what thou hast made, before whom as judge to have repented of one’s sins is salvation, grant that with my soul made new I may so lament my former sins as to be able to obtain forgiveness through Christ.

Johnson has condensed the original without losing very much and has made it a personal prayer. But his emphasis is a positive one, so that he begins with an affirmation of God’s love rather than asserting that God does not hate. It is a twist in emphasis that reveals much about Johnson’s piety and his confidence in the love of God.