Distracted by fifty shades of blue 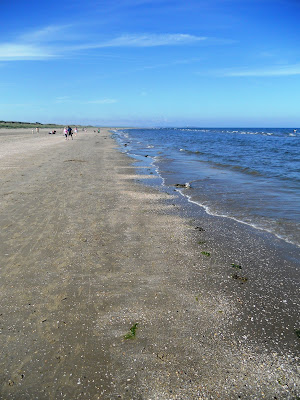 It is amazing how many people can manage to get an afternoon off when real sunshine comes out in Ireland. The temperatures were in the mid 20s when we arrived in Laytown in the early afternoon. As we looked out at the crowds on the beach that stretches all the way to Mornington and the mouth of the River Boyne near Drogheda, we wondered whether we would get a table for lunch in Relish in Bettystown.

But we did, and we got a table with a view out across the terraced garden behind the restaurant, out over the beach and out to the Irish Sea.

There is always a cheerful and welcoming attitude in Relish, and the food is wonderful.

After coffee, we stepped down on the beach, which appeared crowded at first, but had many quiet spots.

The sands stretched for miles, and it was a joy to see so many people splashing playfully and even swimming in the blue waters of the Irish Sea.

It was 5 before we left Bettystown, and we drove along the coast road, through Laytown, Julianstown, Gormanston and Balbriggan to Skerries, where I stopped to take in the view below Ardgillan out across the bay to the harbour in Skerries. This is perfect weather for sailing.

Looking across to the harbour in Skerries this afternoon (Photograph: Patrick Comerford, 2012)

We continued along the coast road through Holmpatrick and Loughshinny to Rush, and then along the edge of Rogerstown Estuary, before turning east again through Donabate and out to Portrane.

I sat for more than an hour in my cousins’ garden at the eastern end of the peninsula, watching the setting sun in the west cast its rays across the beach at the Burrrow and the bay, in which there was only one yacht.

Some of the conversation was sale post-analysis, talking about the sale over the three days of the bank holiday weekend in aid of Heart-to-Hand and the projects it supports in Romania and Albania.

But it was difficult not to be distracted by the fifty shades of blue in the sky above and in the water below. 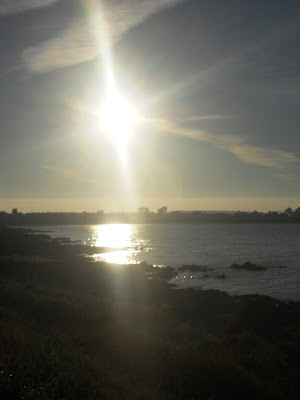 The setting sun above the beach at the Burrow in Portrane this evening (Photograph: Patrick Comerford, 2012)