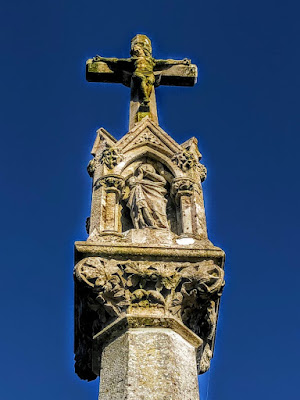 The crucifixion depicted at the top of the Monsell monument in Tervoe village, near Clarina, Co Limerick (Photograph: Patrick Comerford, 2021)

While I was visiting the church site at Kilkeedy and Saint Joseph’s Church in Ballybrown, near Clarina, Co Limerick, recently, I came across two interesting monuments to the Monsell family. Both monuments are intimately linked to the decision of the Monsell family to move from Anglicanism to the Church of Ireland, following in the steps of Cardinal John Henry Newman.

The Monsell Monument in Tervoe village is a memorial to Lady Anna Maria Charlotte Wyndham Quinn (1814-1855), wife of William Monsell of Tervoe, and daughter of Windham Henry Quin (1782-1850), 2nd Earl of Dunraven.

She was 21 when she married William Monsell on 11 August 1836. They had two children, both died in infancy. He became a Roman Catholic in 1850, and when she died on 7 January 1855, she was buried in the Monsell vault in the mediaeval ruins attached to Killkeedy Church.

Monsell he seems to have been heart-broken and grief-stricken. Within weeks, he had erected memorial crosses to her above the vault and in Tervoe village near Clarina, and set up a charity in her memory to assist 20 ‘poor widows’ each year on the anniversary of her death.

The cross at Tervoe carries the inscription, ‘On the seventh day of January, in each year, at the foot of this cross, an alms will be given to twenty poor widows in memory of Anna Maria Monsell January 7th 1855.’

This carved limestone monument has a square-plan stepped base supporting central monument with a square-plan inscribed plinth. A carved octagonal shaft supports a square frieze with foliate motifs at the base, carved in the round with pointed arch niches that have gable-fronted canopies and inset relief figural sculptures surmounted by a carved crucifix.

This monument displays a wealth of high-quality carved details and decoration, including Gothic Revival devices such as the gable-fronted canopies. These details create an ornate and striking piece of sculpture, with craft work of a very high order. 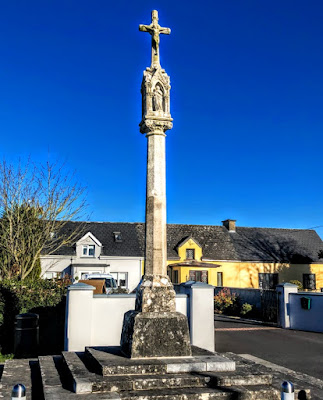 The Monsell monument in Tervoe is a memorial to Lady Anna Maria Monsell (Photograph: Patrick Comerford, 2021)

Anna’s husband, William Monsell (1812-1894), who later became the 1st Baron Emly, was a prominent Co Limerick landowner and politician who held a number of ministerial positions from 1852 to 1873. His father, William ‘Black Billy’ Monsell (1778-1822), of Tervoe, was MP for Dunleer and Dingle; his mother Olivia was a daughter of Sir John Johnson-Walsh, a former MP for Baltinglass.

The Monsell family sold their estates in Somerset, and John Monsell (1581-1637) first bought lands in the Askeaton area in 1612. He returned to England, but the family bought further lands in Co Limerick. At the end of the 17th century, the family also acquired the ruined Carrigogunnell Castle and the lands around it, and they lived at Tervoe from then on, with a townhouse in Saint John’s Square, Limerick.

The family was involved in the wine trade from Cadiz in the 18th century, and many members of the family were ordained in the Church of Ireland. One member of the family, the Revd Charles Monsell (1815-1851), married William Smith O’Brien’s sister Harriet, who, as a widow and as Mother Harriet Monsell, was instrumental in reviving the tradition of women’s religious communities in the Anglican Communion. 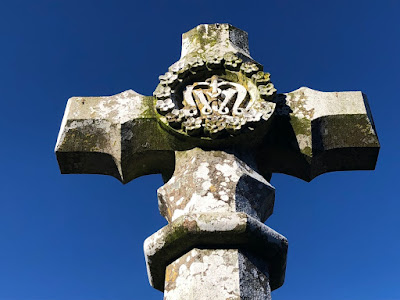 The decorative work on the cross above the Monsell vault at Kilkeedy church, near Clarina, Co Limerick (Photograph: Patrick Comerford, 2021)

William Monsell was educated at Winchester and Oriel College, Oxford, where John Henry Newman was his tutor and intellectual guide. Although Monsell left Oxford in 1833 without a degree, he was already identified with the Oxford Movement and High Church Anglicanism, and he and Newman had become lifelong friends.

Molnsell’s father had died in an accident 1824, and William succeeded to his grandfather’s estates near Clarina at the age of 21.

Monsell was a resident and improving landlord and – unlike his father – was popular with his tenants and neighbours. He was the Sheriff of Co Limerick in 1835. He helped found Saint Columba’s College, now in Whitechurch, near Rathfarnham, in 1843. The founders included the Revd William Sewell, who later founded Radley College in England, the Archbishop of Dublin, and Monsell’s brother-in-law, Lord Adare, later Earl of Dunraven. At its foundation, the school was identified with the High Church tradition in Anglicanism.

Monsell was elected a Liberal MP for Co Limerick in 1847, and continued to hold the seat until 1874, when he was made a member of the House of Lords as Lord Emly. 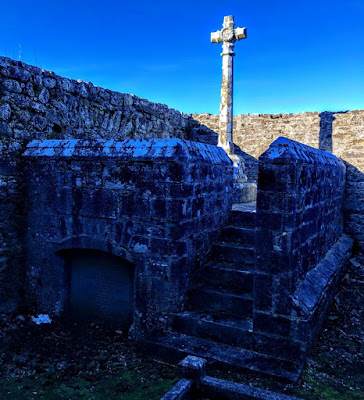 The cross above the Monsell vault at Kilkeedy church, near Clarina, Co Limerick (Photograph: Patrick Comerford, 2021)

Monsell took a prominent part in Catholic affairs, especially in Parliament as a Catholic Whig. As a friend of Wiseman, Newman and other prominent, public Catholics, his position in parliament was often an advantage to his Church. He was involved in introducing the Redemptorists to Limerick in 1851, introduced the Sisters of Mercy to Limerick, and made generous donations towards building Saint John’s Cathedral in Limerick and Saint Mary’s Church, Rathkeale.

Monsell became a member of the House of Lords in 1874 with the title of Baron Emly of Tervoe in Co Limerick. The name Emly was suggested by his friend Stephen de Vere, and reflected his interest in the Church and Church history. There may have been an element of ‘Catholic triumphalism’ in this choice too: the Church of Ireland cathedral at Emly had fallen into disuse, and was pulled down in 1877; a new Roman Catholic parish church, dedicated to Saint Ailbe, was built on a site beside the grounds of the cathedral in 1880-1883.

However, Lord Emly lost much of his popularity in Ireland during his later years because of his opposition to the Land League and to Home Rule.

Lord Emly also erected a Lourdes Grotto in townland of Tervoe. This grotto is on the lands of Cooperhill Farm, north of Tervoe, in an enclosure in a wooded area of the farm, where a stream runs around the grotto. It is believed to be the first Lourdes Grotto in Ireland. 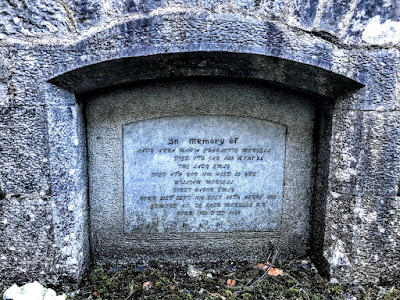 The inscription on the Monsell vault beside Kilkeedy Church, near Clarina, Co Limerick (Photograph: Patrick Comerford, 2021)

In his old age, Lord Emly took a prominent role in founding Mungret College, near his home in Co Limerick. He died on 20 April 1894, aged 81, and was buried in the family vault in Kilkeedy. His estates included 2,246 acres at Clarina, Athlacca and Kilmallock in Co Limerick, 466 acres at Cratloe, Co Clare, and 700 acres in Co Kerry. His papers are in the National Library of Ireland and in the National Archives.

The Emly title then passed to his only son Thomas as the 2nd Lord Emly, who was educated at the Oratory School in Edgbaston, the school established by Newman, and at Beaumont College, Windsor. He married his sister’s sister-in-law, Frances Vincent de la Poer. This Lord Emly was a supporter of Irish labour and nationalism, and when he died on 24 November 1932, the direct line of the Monsells at Tervoe came to an end and the Emly title died out.

The contents of Tervoe House were sold at auction in 1953, and the house was demolished. One recent afternoon, two of us went in search of Lady Emly’s ‘Lourdes Grotto’ near the banks of the Shannon. We saw its location in the distance, but we failed to find it. 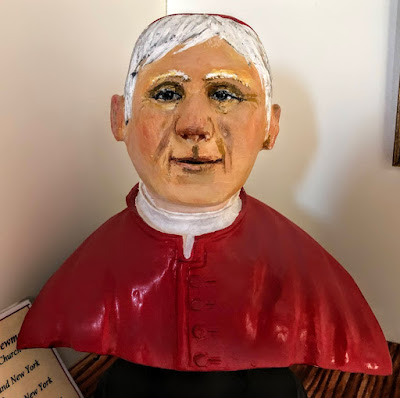 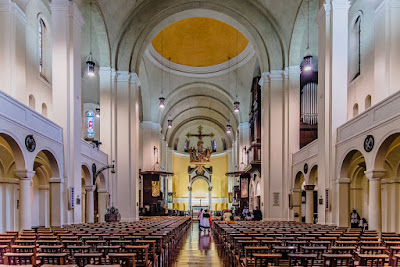 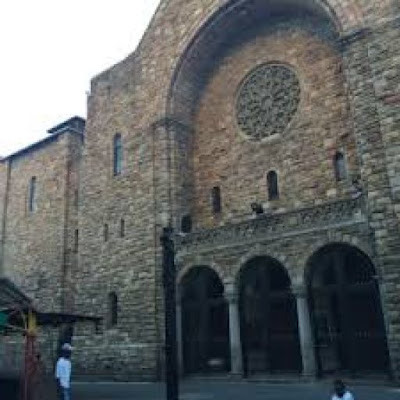