A balmy evening in Notting Hill and Portobello 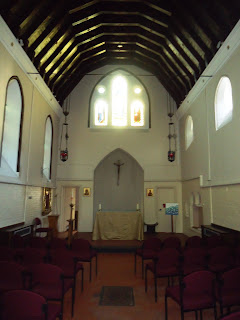 I stayed last night in Saint Andrew’s House, which is also the home of the Anglican Communion Office on Tavistock Crescent in Notting Hill.

There was a warm welcome from Mrs Ann Quirke from Kilkenny, who is the Warden and Guest House Manager, and who describes this as “your Anglican Communion home away from home in London.”

This house was a doctor’s house when the London Diocesan Deaconess Institute, which was founded in 1861, moved to 12 Tavistock Crescent from the King’s Cross area in 1873. A new chapel was built on the site of the former stables area, and was dedicated on Saint Barnabas’ Day 1877.

In time, the community became the Community of Saint Andrew and there were many changes to the house and the area over the following century, with old terraced houses giving way to student flats and apartments. It is only a short walk to Powis Square where, in the 1950s, the notorious slum landlord Rachman exploited thousands of Caribbean tenants living in appalling housing conditions.

It was a bright, balmy evening when three us strolled from Saint Andrew’s through Tavistock Gardens to Portobello Road. The market, which runs for over a mile along Portobello Road, had closed at 7, and as we strolled I was told the bookshop that featured in the movie Notting Hill closed recently and has been sold.

This area has a bubbling Bohemian atmosphere. It was in Antiques Market that Peter Blake bought the ephemera for the cover of the Beatles’ album, Sergeant Pepper’s Lonely Hearts’ Club Band. I remember being in London the day Jimi Hendrix died in Lansdowne Crescent in 1970. ‘The Electric’ on Portobello Road is Britain’s oldest working cinema.

This is also an area of calypso and steel bands, psychedelic rock, reggae and punk, agitprop and graffiti protest, celebrity restaurants, the world’s largest antiques market and kisses at the ‘Blue Door.’

It was a pleasant walk back in bright, warm evening, to Saint Andrew’s House, that “Anglican Communion home away from home in London,” through streets that have been associated with the Notting Hill Carnival and movies such as Notting Hill, My Beautiful Laundrette and Bridget Jones’s Diary and recordings by artists like The Beatles, Jimi Hendrix, The Clash, Bob Marley, Pink Floyd, Van Morrison and Live Aid. 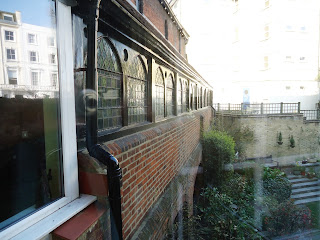 Looking out on the garden at Saint Andrew’s House (Photograph: Patrick Comerford, 2013)