Fresh uncertainty about future
of the Moat House in Tamworth 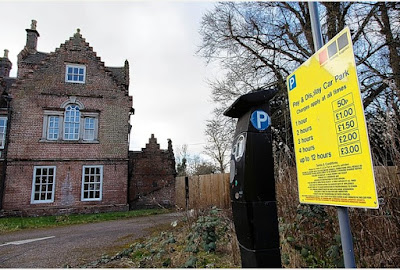 Making money in the meantime ... the Moat House car park is currently being used as a privately-owned pay and display car (Photograph: Tamworth Herald)

Fresh uncertainty surrounds the future of the Moat House, a Comberford family ancestral home on Lichfield Street in Tamworth, according to a report this week by Helen Machin in the Tamworth Herald [17 March 2016].

The Moat House on Lichfield Street in Tamworth, was built by the Comberford family in 1572. But this week’s report in the Tamworth Herald says a question mark hangs over the future of the Moat House just a month after plans were revealed to restore it to its former glory.

The agents for the sale of the leasehold, Christie and Co, say that no deals have yet been struck, although the Tamworth Herald says several parties are interested in taking on the historic landmark building.

According to the report those still keen on acquiring the Moat House include chef and businessman Peter Williamson and licensee Sam Dean, who have grand plans for the Grade II* listed building, including a massive renovation and eventually opening it as an hotel.

Last month, the Tamworth Herald quoted Sam Dean saying the two men were about the sign the lease for the Moat House. This week, however, it transpired that no lease has yet been signed, although the two are still interested in taking on the building.

Christie and Co said Williamson and Dean are among many interested parties who have registered an interest in the Moat House.

However, the Moat House remains empty and in the meantime, the car park at the front of the house on Lichfield Street property has been converted to a privately-owned pay and display car park, charging with cheaper rates than the council-run sites.

The Moat House was forfeited by the Comberford family during the trials and tribulations of the English Civil War in the 17th century, and was never recovered by the family after the restoration. 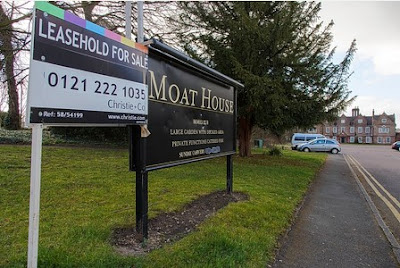 Last month (11 February 2016) Helen Machin reported in the Tamworth Herald that the Moat House was expected to reopen this summer after the completion of the first phase of an ambitious renovation scheme that would restore the Comberford ancestral home to its former glory.

The Grade II* listed property has stood empty since the end of 2014. But Peter Williamson and Sam Dean had ambitious plans that would see the Moat Hotel becoming an hotel within three years.

The ground floor, featuring the bar, library and what used to be the carvery, were the first areas earmarked for improvements, which would include new flooring and redecoration.

The ground floor was expected to reopen in June 2016, serving healthy food at the ‘mid to high’ end of the market and offering low-fat, low-sugar, gluten-free and vegetarian options.

The first floor reception area and bar would be fully refurbished – including the restoration of the early 17th century ceiling in the Long Gallery, which tells in intricate heraldic designs the genealogy of the Comberford family. This first floor was expected to reopen in August.

The third stage of the renovation would see the long-neglected top floor being converted to guest rooms and even a bridal suite.

Sam Dean said at the time: “We aim to have the first floor reception area and bar fully refurbished, including the restoration of the historical ceiling, by the end of August, and the top floor eventually converted into guest rooms including a bridal suite within three years.”

He added: “The ground floor will offer a large breakfast menu, afternoon teas and healthy bistro dining in the evening, including gluten free options.”

He had a vision for the first floor with an a la carte restaurant which the two business partners planned to name “Emily’s” after the ghost of a young girl who is said to haunt the building. It is said she died in a fire that was caused by a candle as she was locked in the tower by her father.

In the 19th century, the Moat House was used as a psychiatric asylum for women. In the 20th century, it has been a gentlemen’s club, a nursing home and a Berni Inn at different times. 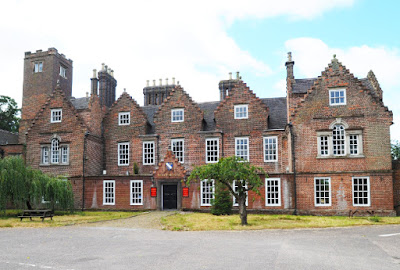 The Moat House on Lichfield Street, Tamworth, was built by the Comberford family in the 16th century (Photograph: Tamworth Herald, 2016)

Posted by Patrick Comerford at 17:18 No comments:

At the age of seven, an accident at Saint Mary’s Church in Lichfield upset his life and had a challenging effect on his religious outlook. The Johnson family home faced Saint Mary’s and the family worshipped there on Sundays, and rented a pew in the church.

The Johnson family may have been there 300 years ago on the morning of Easter Day 1716 when parts of the stone spire fell and landed on the roof of the church and into one of the aisles.

Describing the panic that followed, the London Weekly Journal reported:

The people (being a numerous congregation) crowded so fast that they tumbled upon one another, and lay crawling in heaps … Hats, books, hoods, scarfs, cover-sluts, or long riding hoods, headdresses, spectacles, gloves, clogs, snuff-boxes, fans, etc., were left in abundance.

Johnson later recalled the consequences for his faith of witnessing this calamity:

I fell into an inattention to religion, or an indifference about it in my ninth year. The church at Lichfield, in which we had a seat, wanted reparation, and so I was to go and find a seat in other churches; and having bad eyes and being awkward about this, I used to and read in fields on Sunday. This habit continued until my fourteenth year, and I still find a great reluctance to go to church. I then became a lax talker about religion, for I did not think much against it.

His biographer Peter Martn imagines a young Johnson taking to the fields around Lichfield with The Book of Common Prayer and the Bible instead of going to neighbouring Saint Michael’s Church, which his parents had started to attend.

He was thinking critically about religion, but he returned to returned to regular church-going after reading William Law’s Serious Call to Holy Life. He is now regarded as one of the great saintly Anglican figures of the 18th century.

Inside Saint Michael’s Church … the Johnson family started going to church here after the tower of Saint Mary’s collapsed 300 years ago in 1716 (Photograph: Patrick Comerford)