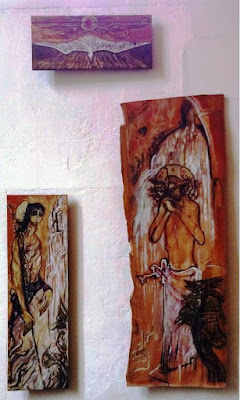 We are approaching the end of the academic semester, and later this evening [14 December 2016] I am presiding at the Eucharist in the Chapel of the Church of Ireland Theological Institute. The preacher is the Revd Geoff Hamilton, a Year III MTh student, and We are using the Collect, readings, Proper and Post-Communion Prayer of the Third Sunday of Advent or Gaudete Sunday, which fell last Sunday [11 December 2016].

This photograph of the Triptych of Saint John the Baptist and the Baptism of Christ in the Chapel of Saint John’s Hospital, Lichfield, and these notes are included in this evening’s chapel booklet:

This evening we hear the Collect, Readings, Proper and Post-Communion Prayer for the Third Sunday of Advent, also known as Gaudete Sunday. This is the Sunday in Advent, when we remember Saint John the Baptist and rejoice in his anticipation of the coming of Christ. On the Advent wreath, the rose-coloured or pink candle, symbolsing Saint John the Baptist, is lit alongside the two violet candles, symbolising the Patriarchs and the Prophets. The readings emphasise the joyous anticipation of Christ’s coming, yet in our anticipation we sing no Gloria in Advent, waiting instead for the angelic Gloria that is to announce Christ’s birth.

Processional Hymn: ‘Long ago, prophets knew’ (Church Hymnal, 133) was written in 1970 by the Methodist hymn-writer the Revd Fred Pratt Green (1903-2000). The tune Personent Hodie is from Piæ Cantiones (Griefswald, 1582), a collection of Finish and Swedish sacred songs. Tis collection also included the Advent carol Gaudete In 1853, this collection came to the attention of the Revd Thomas Helmore (1811-1890) and the Revd John Mason Neale (1818-1866), who published the hymn ‘Long ago, prophets knew.’ In 1925, it was arranged by Gustav Holst (1874-1934), a former student of the Irish-born composer Sir Charles Villiers Stanford.

Creed: Instead of a credal statement this evening, we listen to the Advent carol Gaudete, which reached No 14 in the charts in England with Steeleye Span in the early 1970s.

Offertory: ‘Of the Father’s heart begotten’ (Church Hymnal, 175) is the oldest hymn in the Church Hymnal. It was written by Marcus Aurelius Clemens Prudentius (ca 343-413), a judge in the Roman imperial court, as a challenge to Arianism. It was translated by John Mason Neale and the Revd Sir Henry Williams Baker (1821-1877). The tune is a later form of a plainsong melody in Piæ Cantiones (1582), and was arranged as the tune Corde natus (Divinium mysterium) by Sir David Wilcocks of King’s College, Cambridge. 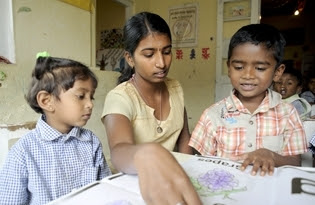 We are half way through the third week of Advent. Throughout this time of preparation for Christ’s coming at Christmas, I am praying each morning in Advent and using for my reflections the prayer diary of the Anglican mission agency, USPG (United Society Partners in the Gospel).

Give thanks for the USPG-supported programme run by the Church of Ceylon to support education for the children of tea plantation workers.