A summer evening in Rathmines 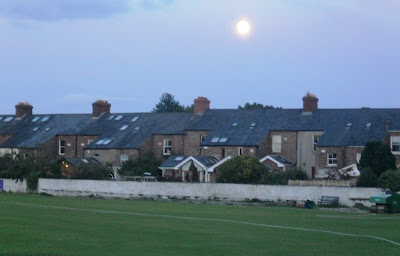 A full moon rises above the grounds of the Leinster Cricket Club in Rathmines this evening (Photograph: Patrick Comerford, 2012)

There was a beautiful rounded full moon rising above the grounds of the Leinster Cricket Club at the top of Observatory Lane in Rathmines this evening. In the cool of the dimming lights of dusk, it was even possible to remember that this is what summer evenings were like, and I recalled many summer afternoons here in my late teens watching cricket matches and touring international sides, including the West Indies.

The old pavilion is gone since 1995, and the facilities have improved immensely since the late 1960s. I hear for people of my age (or perhaps even younger), for whom the thought of playing league cricket is a bit too much now, it’s worth going along on Friday nights for a more relaxed form of cricket with the club’s Taverners section – and that sounded like a very tempting invitation last night.

The Leinster Cricket Club dates from 1 May 1852, and the club first played at Grosvenor Square off Leinster Road, grounds at the end of Garville Avenue in Rathgar, Palmerston Park, and Emor Ville, opposite Portobello Gardens on the South Circular Road, before moving to Observatory Lane in 1865.

In 1873, when WG Grace – who was enjoying his tenth and best season in first-class cricket – brought a side to Rathmines, Leinster put 22 players in the field against Grace’s XI, which included his brother GF and nine professionals. The talent-laden visitors struggled to escape with a draw, but they returned in 1874.

The residents in the houses and apartments overlooking the grounds – including one apartment block called ‘The Innings’ – must wish for days like those again. 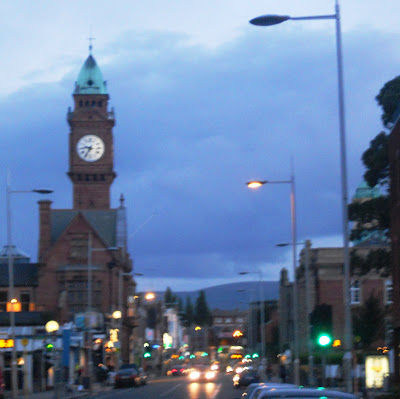 It was possible to believe it was a summer evening in Rathmines (Photograph: Patrick Comerford, 2012)

But I was in Rathmines last night not for cricket but for dinner around the corner and opposite the Swan Shopping Centre in the Village Café, which reopened two years ago.

In the Village Café they say their mission is “to provide an eclectic array of excellent quality food at great value prices. Our food philosophy is based on the appreciation of simple flavours that can only come from insisting on fresh, raw ingredients and treating them with respect, passion and ingenuity.”

Although I worked in Rathmines three year ago, this was my first time to eat in the Village Cafe. The evening menu shows strong French and Italian influences, borrowing from all the Mediterranean culinary traditions. 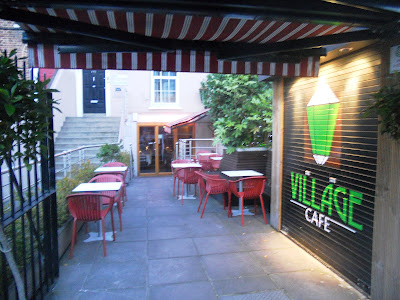 The Village Café ... the menu borrows from all Mediterranean traditions (Photograph: Patrick Comerford, 2012)

Our two starters were char-grilled asparagus bruschetta, with goat’s cheese, tomato and basil, and Portobello mushrooms stuffed with ricotta, roast peppers and oregano. Our two main courses were asparagus and chestnut mushroom risotto, with baby spinach and parmesan, and a fillet of cod (without being wrapped in jamon de bayonne), served on a warm beetroot, asparagus and peanut salad, with a watercress and blue cheese sauce

We had three glasses of white wine, and we finished with an Americano and a double espresso. 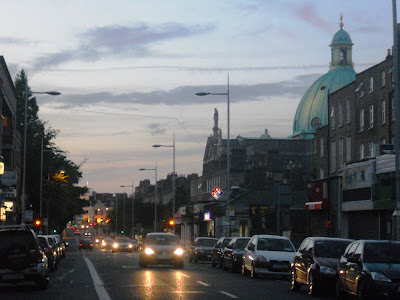 Looking towards Portobello Bridge there was a tiny glimmer of the Spike in O’Connell Street in the distance (Photograph: Patrick Comerford, 2012)

Later, we strolled back up Observatory Lane and along Lower Rathmines Road. The green copper dome of the church stood out in relief in the evening’s blue sky above the houses, and looking towards Portobello Bridge we could barely catch just a tiny glimmer of the Spike in O’Connell Street in the distance.

It truly was a summer’s evening. I’ll be back ... both for the cricket and for dinner in the Village Café.

Posted by Patrick Comerford at 23:25 No comments: