A grey day in Greystones and a lazy, lingering lunch 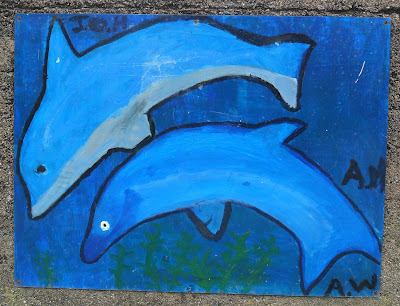 It was a grey day this morning in Greystones. But what a day.

After Morning Prayer in the chapel, and breakfast with students and other members of staff, I headed out to Co Wicklow. The temperature was mild (in the mid-teens), but the forecast was for rain and wind. By the time I was approaching Bray and Glencormack, the Sugar Loaf Mountain was covered in cloud, and so, instead of heading into Bray two of us headed on to Greystones.

The town was a-buzz with shoppers, and the coffee shops were busy. We crossed the Dart line, and made our way down onto the South Beach behind the railway station, where the sea – to quote James Joyce – was “snot green,” and the tide was coming in with a swell.

The South Beach is a broad expansive sandy beach about a kilometer in length. It is a Blue Flag beach, but there were few people walking the shoreline this morning. 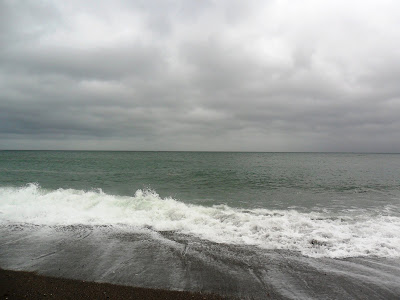 The waves rolling in on the South Beach in Greystones, Co Wicklow, this morning (Photograph: Patrick Comerford, 2011)

It is said that Greystones is the town with the highest Protestants population in the Republic of Ireland, and according to the 2006 census 9.77% of the residents say they are members of the Church of Ireland.

From Greystones, we headed back towards Bray, and stopped for lunch at the Sugar Tree café at the Avoca Shop in Kilmacanogue.

The Avoca store in Kilmacanogue is set in the grounds of the old estate of the Jameson family of whiskey fame and is surrounded by ancient trees and rolling gardens. We ate in the exquisite pavilion-style veranda looking out onto the garden terrace, and we could have lingered there all afternoon it was so charming.

A good walk on the beach and a hearty but lazy lunch combined to make it a good end to a week that had been a hard-working but happy one.
Posted by Patrick Comerford at 20:54 No comments: 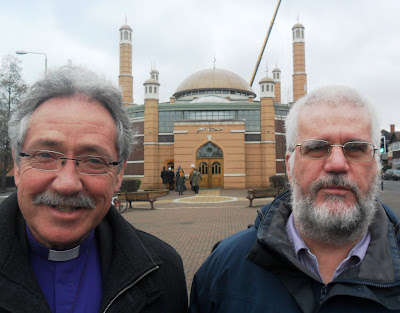 Bishop Trevor Williams and the Revd Dr Keith Scott, rector of Rathkeale, Diocese of Limerick, are pictured outside the Masjid Umar mosque in Leicester during the Church of Ireland inter-faith visit to the city. (Photo: Patrick Comerford)

Today’s edition of the Church of Ireland Gazette [1 April 2011] carries the above photograph and the following half-page report on page 3:

The Archbishop of Dublin-designate, the Rt Revd Dr Michael Jackson, and the Bishop of Limerick and Killaloe, the Rt Revd Trevor Williams, recently led a group of more than 12 people from six Church of Ireland dioceses in an inter-faith training programme based at the St Philip’s Centre in Leicester.

Leicester has a population of almost 300,000 people – and the fourth smallest Anglican cathedral in England. It has a large population of South Asian origin, with well-known Muslim, Sikh, Jain, Hindu and Jewish places of worship, with immigrant groups making up about 40% of the population, it is said Leicester is one of the most ethnically diverse cities in Great Britain.

The Church of Ireland visitors heard from the Bishop Leicester, the Rt Revd Tim Stevens, that Leicester Cathedral had played an “iconic and pivotal role in praying for the peace of the city,” when the far-right English Defence league held a major demonstration in the city last October.

Bishop Stevens said he believed the “great enemy is complacency,” adding: “Political extremism is posing as the true voice of English Christianity, and we need to understand the Biblical foundations for resisting racism and countering far-right extremist political parties … bishops need to be more proactive … there is a danger of thinking everything all right when it is probably not so, he warned.

Bishop William shared with the group’s hosts the experiences of facing up to sectarianism in his work in the Corrymeela Community in Co Antrim, as incumbent of a parish in North Belfast, and through his involvement in the Hard Gospel project. In combatting sectarianism, “we must risk vulnerability one step at a time,” he said.

A panel of local speakers shared with the group their experiences of working and building relationships in a multi-faith society.

The Church of Ireland group also visited a Church of England school, where up to 30 per cent of the children were Muslim, and 20 per cent Hindu, as well as the Masjid Umar, one of the most prominent mosques in Leicester, and the Shree Sanatan Mandir, a large Hindu temple in a former Baptist Church; it also had discussions with leading members of Leicester’s Sikh community in the Amritsar restaurant.
Posted by Patrick Comerford at 06:00 1 comment: