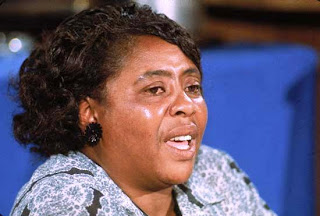 As we move through Lent, there are fewer and fewer saints’ days in the Lent so that our focus is gently shifted towards Holy Week and Good Friday in anticipation of the Resurrection.

Today [14 March] the calendar of the Orthodox Church marks Saint Benedict of Nursia, although he is remembered in some parts of the Western Church on 21 March. However, there are no major saints in the Western calendars today.

Nevertheless, if we remember the saints on the anniversaries of the days on which they died, I thought it was appropriate today to remember the black civil rights activist Fannie Lou Hamer (1917-1977), the woman who was “sick and tired of being sick and tired,” and whose activism was nurtured and motivated by her involvement in the Church.

Fannie Lou Hamer was born Fannie Lou Townsend in Montgomery County, Mississippi, on 6 October 1917, the daughter of sharecroppers and granddaughter of slaves. She had 19 brothers and sisters and was the youngest of the children. Her family struggled financially and often went hungry, and she began working in the fields at an early age.

In spite of her circumstances, Fannie attended school for a few months each year until she reached the sixth grade. After her formal schooling ended, she continued to study and read the Bible under the direction of teachers at the Stranger’s Home Baptist Church. Her religious beliefs and training were dominant influences during her entire life. She regularly prayed that someday she would have the opportunity to do something to improve the condition of black people in Mississippi.

In 1944, she married Perry “Pap” Hamer. That year, she also met civil rights activists who encouraged black people to register to vote. She became active in helping the campaign.

In 1962 Hamer, now aged 44, attended her weekly church service in the Williams Chapel Church in Ruleville, Mississipi, on 25 August. After church, the minister announced a meeting in the church the following night, co-sponsored by the Student Nonviolent Coordinating Committee (SNCC) and the Southern Christian Leadership Conference (SCLC).

Until then, people in the Ruleville area were largely unaware of the civil rights movement. The Williams Chapel Church was packed that hot, humid night. She later recalled how “James Bevel preached [on] ‘Discerning the Signs of the Times.’ Then James Forman talked about how it was our constitutional right to register and to vote. Until then ... I didn’t know a Negro could register and vote ... When they asked for those to raise their hands who’d go down to the courthouse, I raised mine.”

That meeting was life-changing. She met civil rights activists there who were there to encourage black Americans to register to vote. Hamer became active in helping with the voter registration efforts, and worked for SNCC in the fight against segregation and injustice in the South.

This work was often were met with violent responses by angry whites. She was regularly threatened, arrested, jailed, beaten, and shot at. But none of this ever weakened her determination.

She was able to register to vote for the first time in her life in 1963, and then taught others what they needed to know to pass the then-required literacy test. In her organising work, she often led the activists in singing hymns about freedom, including This Little Light of Mine and others.

She found hope in the Gospel message she had imbibed from the black church, particularly in the form of spirituals. “People need to be serious about their faith in the Lord,” she said at one recruitment meeting attended by black ministers who had not yet given their support to the Civil Rights Movement. “It’s all too easy to say, ‘Sure, I’m a Christian,’ and talk a big game. But if you are not putting that claim to the test, where the rubber meets the road, then it’s high time to stop talking about being a Christian.”

In 1963, after being charged with disorderly conduct for refusing to go along with a restaurant's “whites only” policy, she was so badly beaten in jail, and refused medical treatment, that she was permanently disabled.

She helped organise the 1964 “Freedom Summer” in Mississippi, a campaign sponsored by SNCC, the Southern Christian Leadership Conference (SCLC), the Congress of Racial Equality (CORE), and the National Association for the Advancement of Coloured People (NAACP).

That year, she also helped to found the Mississippi Freedom Democratic Party, established in opposition to her state’s all-white delegation that year to the Democratic convention. She brought the civil rights struggle in Mississippi to the attention of the entire nation during a televised session at the convention.

When Senator Hubert H. Humphrey, who brought a compromise offer to the MFDP delegates, she asked him: “Do you mean to tell me that your position is more important than 400,000 black people’s lives? ... Now if you lose this job of Vice-President because you do what is right, because you help the MFDP, everything will be all right. God will take care of you. But if you take it this way, why, you will never be able to do any good for civil rights, for poor people, for peace, or any of those things you talk about. Senator Humphrey, I’m going to pray to Jesus for you.”

Hamer’s testimony at the 1964 Democratic National Convention is viewed as a key step toward the passage of the Voting Rights Act in 1965. She ran for Congress in Mississippi that year, but was not elected.

She continued to work to help the poor and families in need in her Mississippi community. She set up organisations to increase business opportunities for minorities and to provide childcare and other family services.

Fanny Lou Hamer in her own words:

We serve God by serving our fellow man; kids are suffering from malnutrition. People are going to the fields hungry. If you are a Christian, we are tired of being mistreated.

There is one thing you have got to learn about our movement. Three people are better than no people.

One night I went to the church. They had a mass meeting. And I went to the church, and they talked about how it was our right, that we could register and vote. They were talking about we could vote out people that we didn’t want in office, we thought that wasn’t right, that we could vote them out. That sounded interesting enough to me that I wanted to try it. I had never heard, until 1962, that black people could register and vote.

We are sick and tired of our people having to go to Vietnam and other places to fight for something we don’t have here.