Blackberries, brambles and memories for Michaelmas 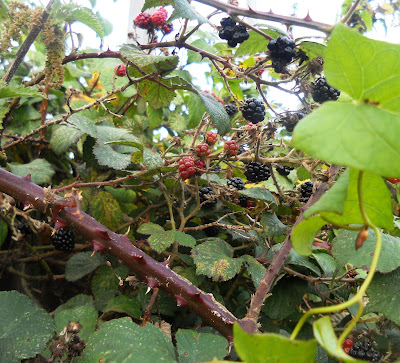 Blackberries and brambles near the beach at Grestones, Co Wicklow, this afternoon (Photograph: Patrick Comerford, 2012)

Today, 29 September, is Michaelmas, the feast of Saint Michael and All Angels. Because this feast day falls near the equinox, it is associated with the beginning of autumn and the closing-in of the evenings. In many parishes it is associated too with Harvest Thanksgiving.

Michaelmas also marks the beginning of new seasons and terms in the law and in academic life, and Michaelmas term ends towards the end of December. There are still memories of this as one of the quarter days, when debts were settled and outstanding accounts were paid. The other traditional “quarter days” are Lady Day (25 March), Midsummer Day (24 June) and Christmas Day (25 December).

According to an old Irish superstition, blackberries should not be picked after Michaelmas. According to folklore, when the Archangel Michael expelled the Devil from Heaven on this day, he fell into a blackberry bush, cursed the brambles he had fallen into, and continues to spit on them after this day.

But there were few ripe blackberries among the brambles in Greystones, Co Wicklow, this afternoon – the lack of warm summer sunshine in the past few months means many of them are still red and waiting to ripen although autumn has arrived. 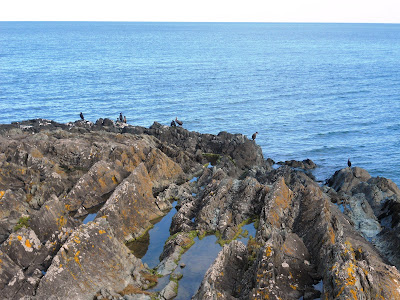 Cormorants on the rocks between the harbour and the beach in Greystones this afternoon (Photograph: Patrick Comerford, 2012)

The temperature was hovering around a comfortable 16 all afternoon. As we walked above the cliffs, between the harbour and the beach, a group of cormorants sat along the craggy rocks, while out in the water there was a flurry of yachts and a lone ship waiting to move into Dublin Bay. The water and the sky were predominantly blue, and the views stretched back north as far as a sun-kissed Howth Head. 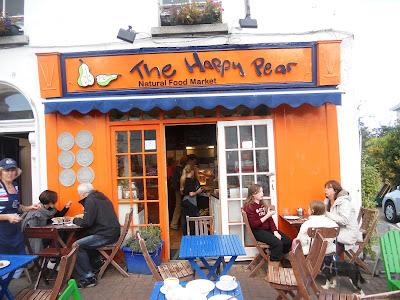 Greystones is spoiled for restaurants. And this afternoon a happy pair went for lunch in the Happy Pear on Church Road. The Happy Pear includes under one roof a natural food market with organic and non-organic sections, and a café and restaurant.

Later we went for a walk on the beach, and back up around the cliffs and rocks again. The sky and the waters remained blue, and I wondered what the full mon would be like in this sky and on these waters later tonight. 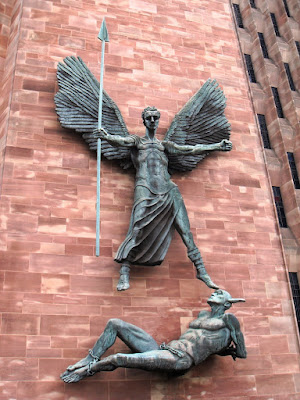 Sir Jacob Epstein’s bronze statues of Saint Michael and the Devil on the wall outside Coventry Cathedral (Photograph: Patrick Comerford)

On the way back to Knocklyon, driving through golden autumnal countryside, my mind wandered a little this Michaelmas as I thought of Jacob Epstein’s statue of Saint Michael at Coventry Cathedral, mused over a story about Saint Michael’s Church in Lichfield with Comberford connections, and recalled lazy afternoons in Michaelhouse in Cambridge.

When Basil Spence commissioned Jacob Epstein, some members of the rebuilding committee objected. They said some of his earlier works were controversial. And, although Coventry was at the centre of post-war reconciliation, some even objected, saying Epstein was a Jew.

To this, Spence retorted: “So was Jesus Christ.” 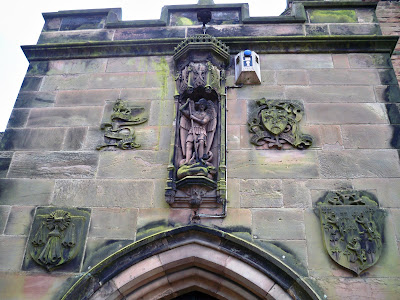 Saint Michael’s Church, overlooking the cathedral city of Lichfield, is reputedly one of the oldest Christian sites in England. The churchyard has some amazing graves, including one known as the “saddle-back grave,” and another shaped almost like a funerary urn. 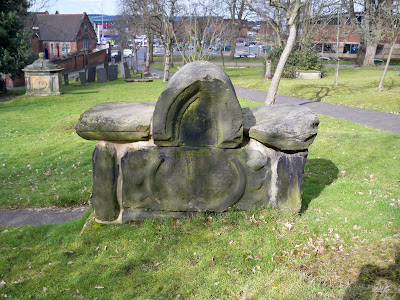 Kate Gomez, who writes a blog called Lichfield Lore [http://lichfieldlore.co.uk/], told the story two weeks ago of Saint Michael’s, its bells and its monuments. The parish launched a Bell Restoration Fund last month.

The Marquis of Donegall, whose family owned Comberford Hall after it had been sold to pay the debts and mortgages of the Comberford family, had erected a spacious mausoleum near the chancel in Saint Michael’s for his family, the Chichesters of Fisherwick Hall.

However, when Kate visited Saint Michael’s last month, she could find no trace at all of the ostentatious Chichesters. However, a booklet on the history of the church told how the mausoleum had become infested by rabbits and they were breeding in the coffins. The mausoleum was replaced by a stokehold during restoration work in 1842-1843, and the bones of Lord Donegall’s family were buried elsewhere. 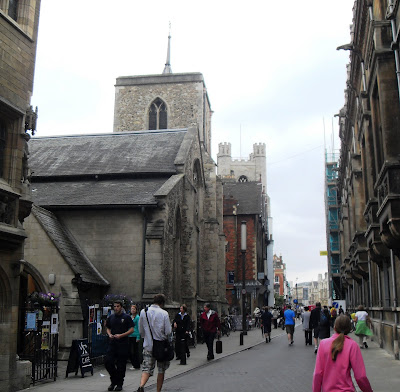 Another Saint Michael’s Church houses one of my favourite coffee shops in Cambridge. Michaelhouse is a café located in Saint Michael’s Church in Trinity Street in the oldest part of Cambridge, only a few steps from Sidney Sussex College, around the corner at the end of Green Street. It stands opposite Gonville and Caius College and is close to Great Saint Mary’s Church, Trinity College and King’s College Chapel.

Saint Michael’s is a 14th century parish and collegiate church. But, while Michaelhouse is an award-winning café and restaurant, the place remains a church – you could say it offers refreshment for both body and soul. Church services are still held in the chancel several days a week, and the mediaeval Hervey de Stanton Chapel offers a peaceful space that is also used at times for concerts.

Michaelhouse recalls the name of one of the earliest Cambridge colleges, which flourished from 13234until 1546, when it was merged with King’s Hall to form Trinity College. Michaelhouse was the second residential college in Cambridge, following Peterhouse (1284) – although King’s Hall was established in 1317, it did not acquire premises until it was re-founded by King Edward III in 1336.

At the time of the dissolution of the monastic houses, Michaelhouse had an income greater than that of Westminster Abbey. The clergy of Michaelhouse served Saint Michael’s Parish until the college was dissolved by Act of Parliament in 1546. It was merged with its neighbour, King’s Hall, to form Trinity College, which is the largest and wealthiest college in Cambridge to this day.

Nothing much remains of the original Michaelhouse buildings, apart from Saint Michael’s Church. 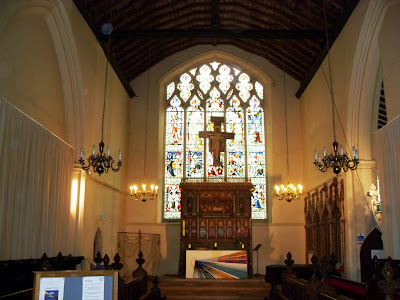 By the early 1990s, the church buildings were in need of significant repair, and an ambitious fundraising and building got under way. The Michaelhouse Centre opened in 2002, and is now a key cultural and spiritual location in the heart of Cambridge, a unique community resource and a place of beauty and tranquillity. 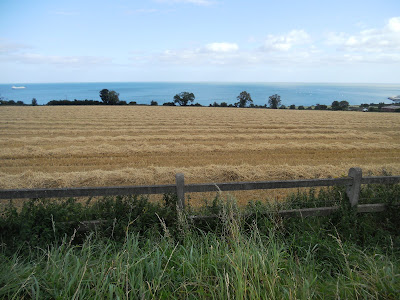 Driving back from Greystones, Co Wicklow, this afternoon through fields of autumn greens and golds (Photograph: Patrick Comerford, 2012)

Posted by Patrick Comerford at 19:24 No comments: