Shelter in the sun in Saint Stephen’s Green

It was a sunny day today ... one of those sunny days we have been hoping for all summer.

So sunny it would have been a perfect day for a walk on the beach. What an afternoon it would have been to be in Bray ... although I have no time for boxing, it is impossible not to admire Katie Taylor as a sportswoman, whose Christian faith has been infectious without being showy, and whose graciousness and magnanimity make her a role model for all engaged in sport.

These have been the best Olympics for Ireland since Melbourne in 1956, but the atmosphere in Irish streets today bears comparison with the national feeling during Italia ’90.

But I had a busy, task-filled day.

In the morning it was appointments with my solicitor, at the Department of Foreign Affairs, and at my bank to put some final pieces in place before beginning yet another course.

Initially the prospects for the day seemed to be bogged down by bureaucracy. What ought to have been a simple task at one embassy had been referred to the Department of Education. They in turn had referred me to the Department of Foreign Affairs, and when I arrived there, I was told I needed to go to yet another office block.

A delay at one could have had such a knock-on effect that the whole day.

Please take a ticket and wait.

The red numbers over the hatch were at 15. Surely the wait could not be so long.

But suddenly those red numbers reverted to 10. How far could it go back? Was this going to be a morning on a hard bench, watching Sky News over and over again?

But after an hour all diplomas and degrees had been signed, sealed, stamped and returned. 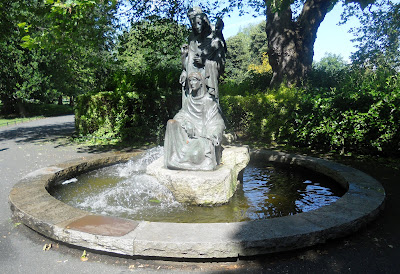 Strolling through Saint Stephen’s Green, flowers were in full bloom, fountains were flowing, and a mother swan was leading five tall, almost-fully-grown signets under the bridge and across the ponds to shelter from the mid-day sun.

Even busy businessmen slowed down their pace as they realise how blessed was this scene.

I was not back at my desk until after lunch. There was a sermon for Sunday to print out, some papers that had been signed and sealed to get off in the post, and finishing touches to put to a paper for an American Church journal.

When I left to visit my GP for a Vitamin B12 injection, the expected lengthy queue was not waiting for me. Katie Taylor’s fight was now on – she must have brought healing to many.

I was out of the GP’s clinic in less than 15 minutes, and the summer sun was still shining.

I’ll get to the beach in the sunshine tomorrow.