Monastic traditions ... part of the English way of life 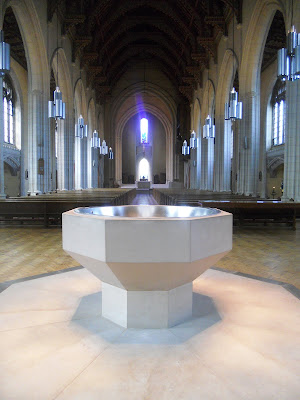 Inside the Abbey Church in Ealing ... the first Benedictine abbey in Greater London since the Reformation (Photograph: Patrick Comerford, 2012)

Following the daily cycle of prayer with the monks of Ealing Abbey, with the psalms, canticles, antiphonies, Scripture readings and prayers, I am working with the reality of a shared tradition in the Benedictine offices and the offices of Morning Prayer and Evening Prayer in the Book of Common Prayer.

Dom James Leachman, a monk of Ealing Abbey, Director of the Institutum Liturgicam here, and Professor of Liturgy at the Pontifical Institute of Liturgy in Sant’Anselmo, Rome, says the Anglican and Roman Catholic churches are “two vigorous traditions” on these islands that “nourish the life of learning and prayer of millions of Christians.”

Writing in the current edition of the Benedictine Yearbook (2012), he says: “Both traditions find shared and deep root in British and Irish soil and in the history of our islands ... we are constantly present to each other.”

It could be said that he Anglican Reformation made the essentials of Benedictine spirituality and prayer life immediately accessible through the Book of Common Prayer.

At the heart of Anglicanism there is no one towering reformer, such as a Luther or a Calvin; nor is there one key theological doctrine, such as predestination with the Calvinists or Baptism with the Baptists, or a moral code such as pacifism with the Quakers. Instead, the Book of Common Prayer is the key to understanding the Anglican Reformation, giving the Anglican Reformation a clearly Benedictine spirit and flavour.

In addition, the basic principles that shape the Book of Common Prayer are Benedictine in spirit. For example, the spirituality of the Rule of Saint Benedict is built on three key elements that form the substance of the Book of Common Prayer: the community Eucharist, the divine office, and personal prayer with biblical, patristic and liturgical strands woven together.

The Anglican Benedictine monk and theologian, Dom Bede Thomas Mudge, once argued that the Benedictine spirit is at the root of the Anglican way of prayer in a very pronounced way. The example and influence of the Benedictine monastery, with its rhythm of the daily office and the Eucharist; the tradition of learning and lectio divina; and the family relationship among an Abbot and his community, have influenced the pattern of Anglican spirituality.

In a unique way, the Book of Common Prayer continues the basic monastic pattern of the Eucharist and the divine office as the principal public forms of worship.

On a regular basis, through the day, in the office and in their spiritual life, Benedictines pray the psalms. The church historian Peter Anson believed that Archbishop Thomas Cranmer’s great work of genius was in condensing the traditional Benedictine scheme of hours into the two offices of Matins and Evensong. In this way, Anglicanism is a kind of generalised monastic community, with the Book of Common Prayer preserving the foundations of monastic prayer.

As a monastic form of prayer, the Book of Common Prayer retains the framework of choral worship but simplified so that ordinary people can share in the daily office and the daily psalms.

Among the Caroline divines, John Cosin, George Herbert, William Laud, Jeremy Taylor and others produced a whole literature of personal and liturgical prayer that enriched Anglican spirituality even more and recovered additional elements of the Benedictine monastic heritage. This heritage nourished the monastic-like life of Nicholas Ferrar and his family in their community at Little Gidding.

By the 17th century, John Bramhall, Archbishop of Armagh, was lamenting the dissolution of the monasteries:

First, we fear that covetousness had a great oar in the boat, and that sundry of the principal actors had a greater aim at the goods of the Church than at the good of the Church ... Secondly, we examine not whether the abuses which were then brought to light were true or feigned; but this we believe, that foundations, which were good in their original institution ought not to be destroyed for accessory abuses ...I do not see why monasteries might not agree well enough with reformed devotion.

Nevertheless, the story of Nicholas Ferrar and his community at Little Gidding influenced many Anglican theologians, poets and writers, from George Herbert and Isaac Walton to TS Eliot. Later, many Benedictine houses were founded throughout the Anglican Communion in the 19th century.

Of course, Benedictine monasticism predates the divisions in the Western Church, and it could be described as a kind of “ecumenical anamnesis that makes a shared heritage present and living, and that opens up fresh horizons for ecumenical hope and commitment.

Nor has the Benedictine family forgotten its familial and historical ties with many cathedrals throughout the Church of England.

Before the dissolution of the monasteries, there were nine Benedictine cathedral priories in England: Canterbury, Winchester, Worcester, Durham, Norwich, Rochester, Ely, Coventry and Bath. Others before that had included Sherborne, Bath Abbey and Westminster Abbey.

Many people are confused about whether Bath Abbey and Westminster Abbey should be called cathedrals; indeed, the origins of the English cathedral priories vary, they differ in status, and their organisation differed too.

After 1215, there were few Benedictine bishops and the cathedral priors were given the right to use pontificalia and to sit with the abbots in Parliament. The Benedictine cathedral priories, like all the religious houses in England, were dissolved by the crown during the reign of Henry VIII. What is often overlooked is that their dissolution was confirmed by the papal bull Praeclara in 1555 on the recommendation of Cardinal Reginald Pole.

When the Roman Catholic hierarchy was established in England in 1850, some people thought these titles would be quietly dropped, as it was obvious the old cathedrals would continue to be part of the Church of England. But the memory of the mediaeval cathedral priories remained and the cathedral priors continue to be appointed. 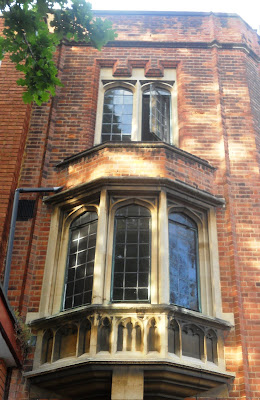 Staying at Ealing Abbey ... with a window onto the wider world (Photograph: Patrick Comerford, 2012)

For some people, the idea of a monastery in the suburbs in London must seem a contradiction in terms. But the efforts to establish a cathedral priory in the Diocese of Westminster continued. These efforts bore fruit in 1916 with the foundation of Ealing Priory, now Ealing Abbey, where I have been staying these two weeks. When Ealing Priory became Ealing Abbey in 1955, it was the first Benedictine abbey in Greater London since the Reformation.

Many of the cathedral deans and chapters are keen to stress their Benedictine roots, some of them holding “Benedictine weeks” with groups of monks, led by the cathedral prior, residing for the week to sing the office and give a programme of lectures.

In addition, a ruling the Benedictine abbot who resigns is often invited to be become the titular abbot of an ancient abbey that longer has a monastic community. A former Abbot of Ealing is now the titular Abbot of Evesham. The nine abbeys whose stories and memories are kept alive in this way are: Lindisfarne, Whitby, Shrewsbury, Evesham, Sherborne, Tewkesbury, Bury St Edmunds, Westminster and Gloucester.

And, come to think of it, I never thought Westminster Abbey had a titular abbot. But it all goes to show how ecumenical co-operation can strengthen family bonds, and how much the Benedictines have remained part of English life.

There’s even an old cutting from the Daily Telegraph on the desk in my room in Ealing Abbey that says the Benedictine tradition is so rooted in English life and culture that: “Some claim to see the Benedictine spirit in the rules of Cricket.”