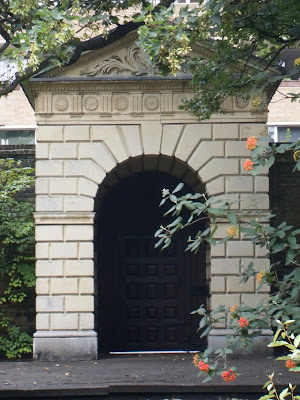 Staying in Sidney Sussex College over the past five years has brought the privilege of being within strolling distance of most if not all of the major churches, chapels and colleges in Cambridge.

The Classical Gate in Sidney Sussex College was originally erected in Hall Court to replace the first main gate. During Wyatville’s alterations in 1832, the gate was moved to the north-east corner of the gardens, where it remains an eye-catching feature. But the gate must be closed permanently, for I have never seen it open into Jesus Lane, which forms the northern boundary of the grounds of Sidney Sussex.

Almost opposite the closed Classical Gate in Jesus Lane is Wesley House, which is also home to the Institute for Orthodox Christian Studies. And a little further on is Jesus College and, opposite it, on the same side as the Classical Gate, are All Saints’ Church and Westcott House. 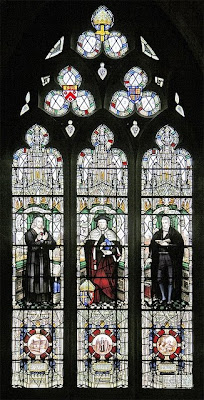 George Herbert with Bishop Westcott and Henry Martyn in the ‘Saintly Cambridge Anglicans’ window in All Saints’ Church, Cambridge

All Saints’ Church is a wonder of the Gothic Revival in English church architecture and of the influence of the Arts and Crafts movement on interior design.

All Saints’ Church, built in 1864, was designed by the architect George Bodley. It is a high Tractarian church designed in the Decorated style, and is generally considered to be Bodley’s masterpiece. The interior decoration includes works by William Morris, Edward Burne-Jones, Ford Madox Brown, Charles Kempe and Frederick Leach.

For many years, this was Cambridge’s highest Anglo-Catholic church. But the congregation gradually dwindled as fashions changed and the population of the parish moved out to the big new housing estates. In 1973, All Saints’ was declared redundant, and was scheduled for demolition. However, the church was saved at the eleventh hour and it was put in the care of the Churches’ Conservation Trust in 1981.

A massive programme of repairs was carried out in the early years of this century, and since Easter 2007 the church has been open to the public seven days a week, and the church is used regularly by Westcott House and other theological colleges.

The ‘Saintly Cambridge Anglicans’ window, installed in the church in 1923 by Kempe & Co, has three panels of stained-glass designed by John Lisle honouring three Cambridge saints: the priest poet George Herbert (1593-1633); Bishop Brooke Foss Westcott (1825-1901) of Durham, who gave his name to Westcott House; and the pioneering missionary Henry Martyn (1781-1812). Herbert and Westcott were fellows of Trinity College Cambridge, while Martyn was a Fellow of Saint John’s College, which explains why the coat-of-arms of each college is also depicted in the window.

Below the panel depicting George Herbert is an image of Saint Andrew’s Church, Bemerton, the Wiltshire parish church where he was buried, and has the words: “Here George Herbert ministered and beneath the Altar of Bemerton Church was buried A.D. 1632.”

Of course, George Herbert never ministered in All Saints’ Church, and he died in 1633, not in 1632. Curiously, one of his successors as Vicar of Bemerton was the Revd Arthur Vaughan Williams, father of the composer, Ralph Vaughan Williams (1872-1958).

Vaughan Williams had a special affinity for Herbert’s poetry, in part because Herbert was also a musician whose works displayed a familiarity with the nature of music. The settings by Vaughan Williams include the Five Mystical Songs (1911), which includes Herbert’s ‘Easter.’

As we prepare for Easter, I am occasionally selecting poems to help our reflections in Lent. My choice of poem for today, the First Sunday in Lent, is ‘Lent’ by George Herbert, who is commemorated in the calendar of the Church of England and many other Anglican churches tomorrow [27 February]. 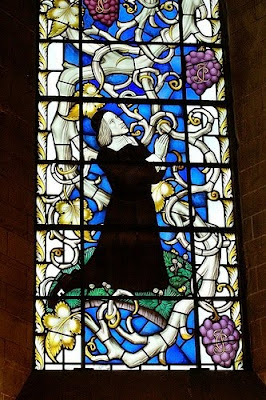 George Herbert at prayer ... a window in Salisbury Cathedral

Welcome dear feast of Lent: who loves not thee,
He loves not Temperance, or Authority,
But is compos’d of passion.
The Scriptures bid us fast; the Church says, now:
Give to thy Mother, what thou wouldst allow
To ev’ry Corporation.

The humble soul compos’d of love and fear
Begins at home, and lays the burden there,
When doctrines disagree,
He says, in things which use hath justly got,
I am a scandal to the Church, and not
The Church is so to me.

True Christians should be glad of an occasion
To use their temperance, seeking no evasion,
When good is seasonable;
Unless Authority, which should increase
The obligation in us, make it less,
And Power itself disable.

Besides the cleanness of sweet abstinence,
Quick thoughts and motions at a small expense,
A face not fearing light:
Whereas in fulness there are sluttish fumes,
Sour exhalations, and dishonest rheums,
Revenging the delight.

Then those same pendant profits, which the spring
And Easter intimate, enlarge the thing,
And goodness of the deed.
Neither ought other men’s abuse of Lent
Spoil the good use; lest by that argument
We forfeit all our Creed.

It’s true, we cannot reach Christ’s forti’eth day;
Yet to go part of that religious way,
Is better than to rest:
We cannot reach our Saviour’s purity;
Yet we are bid, ‘Be holy ev’n as he,’
In both let’s do our best.

Who goeth in the way which Christ hath gone,
Is much more sure to meet with him, than one
That travelleth by-ways:
Perhaps my God, though he be far before,
May turn and take me by the hand, and more:
May strengthen my decays.

Yet Lord instruct us to improve our fast
By starving sin and taking such repast,
As may our faults control:
That ev’ry man may revel at his door,
Not in his parlour; banqueting the poor,
And among those his soul.