Schull or Skull, it is still beautiful
in the morning in early summer 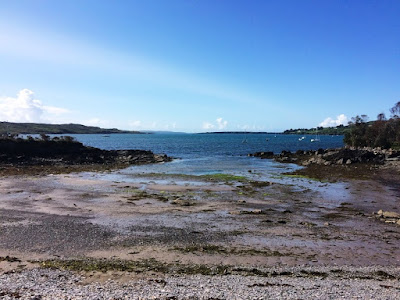 Looking out to the sea from a beach near Schull Harbour (Photograph: Patrick Comerford, 2016)

Schull or Skull – the spellings compete. As I tried to post photographs, Facebook kept telling me on Saturday morning that I was in Skull. Google Maps, on the other hand, told me I was in Schull.

Local people might have preferred to tell me I was in ‘Scoil’ and that the name of the village comes from the Irish An Scoil, the school.

The name of this pretty village in West Cork is said to be derived from Scoil Mhuire, or Saint Mary’s School, the name of a mediaeval monastic school. But there are no traces of this school anywhere.

Schull is a pretty, painted village on the south-west coast of Ireland, below the slopes of Mount Gabriel (407 metres). The town once had its own railway station. This opened in 1886 as the last stop on the Schull and Skibbereen Railway, a steam-operated narrow gauge railway that closed by in 1947. 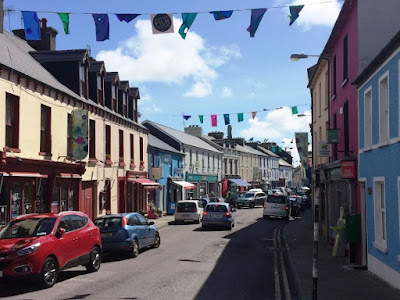 CIE finally closed the station in 1953, and local buses to Cork seem to pass through only once or twice a day. But people still get to Schull in large numbers on these early summer days, attracted by the small sandy beaches, the sheltered harbour, the sailing and boating facilities, the dramatic coastline, the colourful pubs on the Main Street, the art galleries, cafés, restaurants and food and book shops. 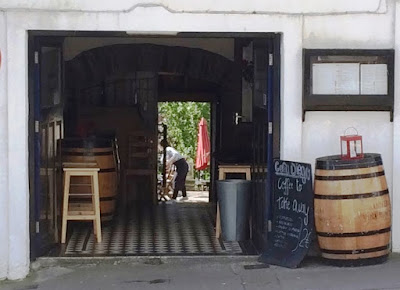 Schull has cafés, restaurants and tapas bars all along the Main Street (Photograph: Patrick Comerford, 2016)

Schull is a small place on the peninsula leading out to Mizen Head, with a resident population of about 700 people. But there are many holiday homes along the coast, and the village was abuzz when we arrived on Saturday morning. 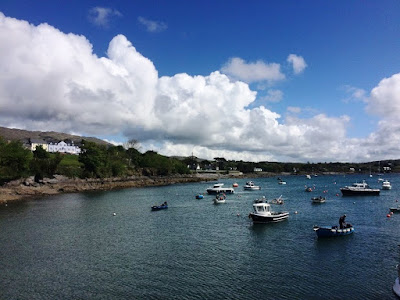 Schull is internationally known as a sailing centre and there are regular weekend races for cruisers and dinghies. Its sheltered harbour makes it popular for sailing activities and festivals as well as being vital for local fishing and markets.

Out at sea, the Fastnet Rock lighthouse was built in 1897. It is 11 km south of the mainland and rises to about 30m above sea level. It is used as the midpoint of one of the world’s classic offshore yachting races, the Fastnet Race. This is a 979 km (608 mile) round trip from Cowes on the Isle of Wight, round the rock and back to Plymouth.

Fastnet is used too as a mark for yacht races from local sailing centres in Schull and Baltimore. The harbour was busy on Saturday morning with fishing boats and sailing classes. During the summer months, there are boat trips to Clear Island and around Mizen Head.

Skull sounds like a ghoulish name for a village. But on Saturday morning, although the tourist and holiday season has yet to begin, Schull was a vibrant place, and I was overwhelmed by the choices I had for an early morning walk on the beach.