The charms of Chesterfield near
Lichfield, and some family links 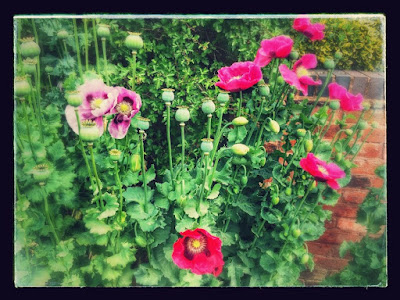 Poppies against a wall at Chesterfield Farm … the area has a farming history dating back to Roman times (Photograph: Patrick Comerford, 2015)

After visiting the Roman remains at Wall and a long lingering mid-week lunch in The Trooper, I found myself strolling in the country lanes south of Lichfield, in the tiny village of Chesterfield.

There is a unique charm about tiny villages in the English countryside. Chesterfield, north of Shenstone and south of Wall, is clustered along the northern section of Ashcroft Lane where Ashcroft Lane is crossed by Raikes Lane. It is part of the civil parish of Wall and within Lichfield District Council, but while it has no pub, church, shop or village green, it is an attractive and inviting village, with a sense of a warm and welcoming atmosphere.

A local blogger, Brownhills Bob, says on Tumbler: “Chesterfield is a lovely little hamlet, just south of the A5 between Wall and Shenstone. Standing on the junction of Ashcroft and Raikes lanes, it’s a small, rural idyll where cows still hold up traffic and fascinating houses from several periods give the place an air of permanence and tranquillity.”

I found my way from the Trooper to the junction with Ashcroft Lane at Manor Farm, and continued on along the lane, below the bridges of the A5 and M6, through open green fields and pastures

Grazing in fields and pastures at a farm in Chesterfield (Photograph: Patrick Comerford, 2015)

The name Chesterfield means open land by a Roman town. Chesterfield takes its name from the Roman settlement at Wall, half a mile to the north. Shenstone is mentioned in the Domesday Book and this establishes the existence of an estate here before the Norman Conquest.

Although this was my first time to visit the village, the Comberford family connection with Chesterfield dates to as far back as end of the 11th century or early 12th century, when Alan de Comberford held lands at Chesterfield, near Shenstone, south of Lichfield.

A generation later there are records of Alanus de Comberford is mentioned during the reign of Henry I (1100-1135), in the Pipe Rolls and other Staffordshire records. He held lands at Wigginton, near Tamworth, and Chesterfield in Scertestan (Shenstone).

The Staffordshire historian Stebbing Shaw notes that during the reign of Richard I (1189-199), the Comberford family owned the Manor of Chesterfield, near Wall, south of Lichfield. 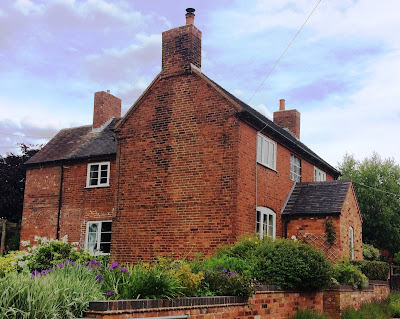 In mediaeval times, the Vicars Choral of Lichfield Cathedral owned substantial lands in the parish of Shenstone, mainly at Chesterfield but also further south near the Bourne Brook.

The religious census of 1532 shows seven families and 43 individuals living in Chesterfield.

Later that century, Raphael Holinshed, the 16th century chronicler of English history, refers to Chesterfield as Chesterford in 1577.

Meanwhile, the Comberford family continued to hold its land in the Chesterfield area until at least the late 16th century, although family members never seem to have built a house in the village. William Comberford (1551-1625) had houses at Comberford Hall, Wednesbury Manor and the Moat House, Tamworth.

On 27 April 1586, when William was in Shenstone, where he held lands at nearby Chesterfield, he was set on by “Little Neddy,” a well-known highwayman, who stole £72, a £5 gold ring, and a sword worth £1 from him. Later, Little Neddy (Edward Stevenson) was apprehended and convicted.

In 1634, William Comberford’s daughter, Anne, married Benjamin Rugeley, a younger son of Richard Rugeley (1564-1623) of Shenstone. His eldest brother, Colonel Simon Rugeley (1598-1666) of Shenstone, was a member of the parliamentary committee at Stafford and inherited Hawksyard near Rugeley.

When he died in 1653, Colonel William Comberford (ca 1592-1653) left £5 to each of his godchildren, including Robert Ward, son of Alexander Ward of Shenstone. Alexander Ward had acquired a large estate in Shenstone and was buried there when he died on 10 December 1663 at the age of 75. The Comberford interests in Chesterfield faded as the family’s prosperity waned after the English Civil War. 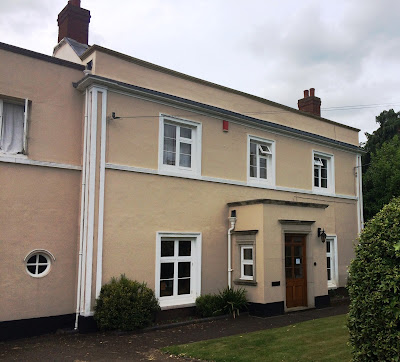 Chesterfield House … dating from 1732, but it may have an earlier history (Photograph: Patrick Comerford, 2015)

There was a Quaker meeting in Shenstone from 1654 until it moved to Chesterfield, where the meeting continued from 1669 until the 1720s. These Quakers in Chesterfield tried but failed to establish a Friends’ meeting house in Lichfield in 1703-1704.

But if Chesterfield was a quiet sleepy backwater since the Romans left Wall, Bowen’s map of Staffordshire in 1749 shows that Chesterfield was close to the main road from Tamworth to Wolverhampton cutting across the parish of Shenstone in an East-West direction near Chesterfield.

The road left Tamworth at Coton, passed Hopwas, and travelled north of Weeford where it met the old Lichfield to London Road. It then passed through Shenstone parish between Chesterfield and the brook north of Shenstone Village. The road then went slightly south between Lynn and Stonnall, where it met the Lichfield to Walsall road at Shire Oak, and then continued down to Shelfield and Goscote.

Yates’s map in 1774 is the first map to show all the settlements within the Parish of Shenstone. This map clearly identifies the village of Shenstone and the surrounding hamlets, including Chesterfield.

The Parish of Shenstone built is workhouse quite a distance from Shenstone, just outside Chesterfield, hidden well away from the hamlet. An adjoining field is named as the Poor’s Garden on a map in 1818. The workhouse was closed when Shenstone was joined to Saint Michael’s Union in Lichfield in the 1830s and it was demolished soon after. 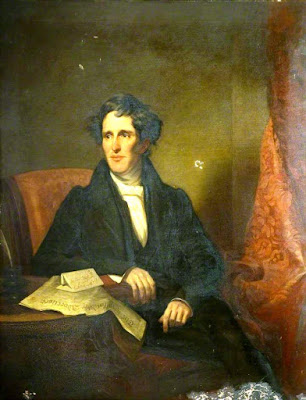 Canon James Thomas Law, Master of Saint John’s Hospital, Lichfield, owned much of the land in Chesterfield by 1851

Canon James Thomas Law was the Chancellor of Lichfield Cathedral and the Master of Saint John’s Hospital, Lichfield (1821-1826), where I was preaching on Wednesday evening. Law was an early member of the Cambridge Camden Society, which was strongly influenced by AWN Pugin. With the Lichfield architect Thomas Johnson of Davidson House, he was a founding member in 1841 of the Lichfield Society for the Encouragement of Ecclesiastical Architecture, which often met in Canon Law’s house in Market Street. He was buried in an elaborate mausoleum in Saint Michael’s churchyard, Lichfield.

There are other interesting houses in the village too. Chesterfield House is of Georgian origin, and dates back to at least 1732, if not earlier. It is a seven-bedroom house with a cellar, mature gardens, two coach houses, loose boxes, a kitchen garden and fenced paddocks. It was sold about four years for £825,000. 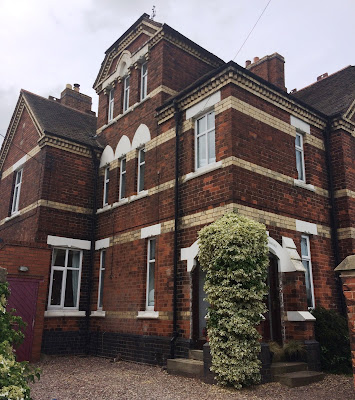 Carisbrooke and Woodleigh form a pair of elegant, matching Victorian houses on the corner of Ashcroft Lane and Raikes Lane (Photograph: Patrick Comerford, 2015)

Carisbrooke and Woodleigh form a pair of elegant, matching gabled five-bedroom Victorian houses on the corner of Ashcroft Lane and Raikes Lane.

Further south along Ashcroft Lane, we crossed the Crane Brook where it flows from Hammerwich to Chesterfield and on to the north-west of Shenstone Village and then into the Black Brook.

At the end of Ashcroft Lane, we turned into Lynn Lane, crossed the bridge over Footherley Brook, and arrived at Shenstone in time to catch the train back into Lichfield. 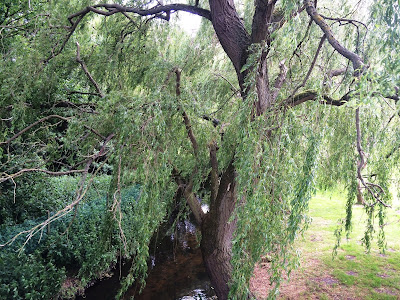 Willows at the bridge over Footherley Brook in Shenstone (Photograph: Patrick Comerford, 2015)

AJ Kettle, A List of Families in the Archdeaconry of Stafford (Staffordshire Record Society, 1976) The census is discussed in more detail by Ann Kettle in her introduction to the printed version in Historical Collections for a History of Staffordshire (4th series, Vol 8, Shenstone).

Richard Totty (ed) A Landscape Survey of the Parish of Shenstone, edited for The Staffordshire Archaeological and Historical Society (Lichfield, 2009).