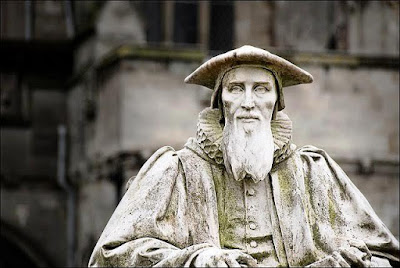 The statue of Richard Hooker outside Exeter Cathedral

Christian thinking on justification is seen by many theologians as the theological fault line that divides Catholics and Protestants ever since the Reformation in the 16th century.

In 2017, many Churches are going to mark the 500th anniversary of Martin Luther posting his 95 Theses in Wittenberg on 31 October 1517. Luther insisted: “This one and firm rock, which we call the doctrine of justification is the chief article of the whole Christian doctrine, which comprehends the understanding of all godliness.”

But was Luther correct in asserting this? What do we mean by justification? And what is the classical Anglican theological position on justification?

When we talk about justification in theology, we are talking about God removing the guilt and penalty of sin while at the same time declaring that a sinner is righteous through Christ’s atoning sacrifice. But the means of justification is an area of significant difference between Catholics and the Eastern Orthodox on the one hand, and Protestants on the other.

Broadly speaking, we could say Catholics and the Eastern Orthodox distinguish between initial justification, which occurs at Baptism, and permanent justification, after a lifetime of faith and discipleship.

Most Protestants believe that justification is a singular act in which God declares an unrighteous individual to be righteous, an act made possible because Christ was legally “made sin” on the Cross (see II Corinthians 5: 21). Lutherans and Calvinists support their view with some passages (see Acts 16: 14; Ephesians 2: 8 and Philippians 1: 29), while Catholics and Eastern Orthodox rely on others (see Matthew 19: 17; Galatians 5: 19-21; and James 2: 14-26).

For the Early Church, the concept of justification was secondary to issues such as martyrdom. The early Patristic writings seldom mention it, and it does not begin to be developed in the Western Church until the conflict between Augustine and Pelagius. The Eastern Church places less emphasis on justification, and instead talks about “sanctification” or theosis.

Martin Luther’s singular change in thinking at the Reformation is the notion of imputed righteousness. This idea suggests the righteousness of Christ was imputed to the believer, who could be justified or declared by God to be not guilty. For Luther, the believer is simul iustus et peccator, “simultaneously righteous and a sinner.” John Calvin, for his part, saw three meanings of “justification” in scripture, none of which meant “to make righteous.”

These concepts are unknown for the first 1,500 years of Christian theology, yet justification more than any other one single concept demarcates Catholic theology and Reformation theology. So what was the classical Anglican theological thinking on this great dividing issue?

Article 11 of the Articles of Religion or the 39 Articles says: “We are accounted righteous before God, only for the merit of our Lord and Saviour Jesus Christ by Faith, and not for our own works or deservings: Wherefore, that we are justified by Faith only is a most wholesome Doctrine, and very full of comfort, as more largely is expressed in the Homily of Justification.”

But what does this mean? How is it understood and worked out in classical Anglican theology?

Perhaps the best writer to turn to is Richard Hooker (1533-1600), perhaps the greatest Anglican theologian.” Hooker’s emphases on Scripture, Reason and Tradition have shaped and continue to influence Anglican theology. He is often seen as the founding figure in Anglican theological thought, and he is the great defender of the Anglican via media. CS Lewis includes him among the great figures of 16th century English literature.

Hooker’s masterpiece is The Laws Of Ecclesiastical Polity, which sets out his theological system, and it is foundational for Anglican theology. Although he is unsparing in his censure of what he sees as the errors of Rome, Pope Clement VIII said of the book: “It has in it such seeds of eternity that it will abide until the last fire shall consume all learning.”

Hooker’s best short work is his sermon, A Learned Discourse of Justification. In an earlier sermon in 1585, he expressed the hope of seeing in Heaven many who had been Roman Catholics on earth. But a prominent Puritan, Walter Travers (1548-1635), took him to task, saying that as Roman Catholics did not believe in Justification by Faith, they could not be justified.

Hooker replied at length in his sermon. He agrees with his opponents that the official theology of Rome is defective on this point. However, he defends his assertion that those who do not rightly understand the means that God has provided for salvation may nonetheless be saved. He says: “God is no captious sophister, eager to trip us up whenever we say amiss, but a courteous tutor, ready to amend what, in our weakness or our ignorance, we say ill, and to make the most of what we say aright.”

He says: “I doubt not but God was merciful to save thousands of our fathers living in popish superstitions, inasmuch as they sinned ignorantly.”

James Kiefer, in his introduction to Hooker’s Learned Discourse on Justification, explains that “this sentence, which today would be fiercely attacked by those who thought it arrogant, narrow, and bigoted, was at the time attacked on opposite grounds.” But at the time it shocked the Puritans, especially Travers, who eventually became Provost of Trinity College Dublin. 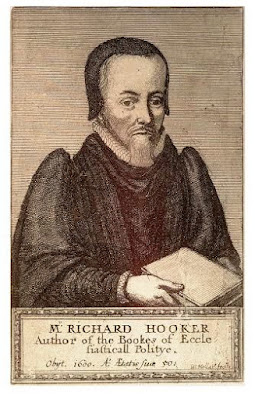 In the Dublin Fragments, Hooker asserts that generally “justification” means “to be made righteous.” More particularly, it gives way to two further meanings: “To be justified is to be made righteous. Because therefore, righteousness implies first remission of sins, and secondly a sanctified life, the name is sometime applied severally to the former, sometimes jointly it comprehends both.”

“Touching Sacraments whether many or few in number, their doctrine is, that ours both signify and cause grace; butt what grace and in what manner? By grace we always understand as the word of God teaches; first, his favour and undeserved mercy towards us; secondly, the bestowing of his Holy Spirit which inwardly works; thirdly, the effects of that Spirit whatsoever but especially saving virtues, such as are, faith, charity, and hope, lastly the free and full remission of all our sins. This is the grace which Sacraments yield, and whereby we are all justified.”

The effect of Baptism

In other words, Hooker understood the sacraments to be channels of justifying grace. For example, in Book V in his Laws (chapters 58-61), he puts forward a doctrine of baptismal regeneration that is different from the reformers. He explains how first justification is linked to baptism: “Baptism is a sacrament which God has instituted in his Church to the end that they which receive the same might thereby be incorporated into Christ and so through his most precious merit obtain as well that saving grace of imputation which takes away all former guiltiness, as also that infused divine virtue of the Holy Ghost which giveth to the powers of the soul their first disposition towards future newness of life.”

For Hooker, the imputation of Christ’s righteousness occurs in the very action of Baptism itself, whereby also the Spirit is received by the believer. In Hooker’s sacramental theology, Baptism is the instrumental cause of (first) justification.

This position leads Hooker to two conclusions that differ markedly from the magisterial reformers. Firstly, he believes that the very action of infant baptism leads to the child’s sins being actually remitted even if faith is not present. Secondly, when he talks of being justified by faith “alone” he assumes that the sacrament of baptism is included.

Hooker believes that the Early Fathers were too harsh in insisting that an infant is damned if he or she dies without Baptism. He believes there are circumstances that make impossible to receive the sacrament, and that God in his grace then extends acceptance. 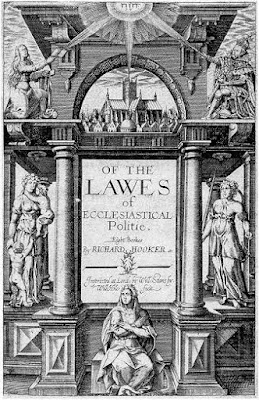 The effect of the Eucharist

If first justification is the effect of Baptism, Hooker believes second justification is the effect of the Eucharist: “We receive Christ Jesus in Baptism once as the first beginner, in the Eucharist often as being by continual degrees the finisher of our life. By baptism therefore we receive Christ Jesus and from him that saving grace which is proper unto Baptism. By the other sacrament wee receive him also imparting therein himself and that grace which the Eucharist properly bestows.”

Calvin believes the sacraments impart grace because they are a subset of the word, which strengthens and nourishes faith. They are visible words are there to increase faith. On the other hand, Hooker places the sacraments side-by-side with the word as a means of grace in their own right. They are not simply a subset of the word, although they function as signs of God’s promises.

The Reformation understanding of justification also transformed ecclesiology. If a believer is sinful and righteous at one and the same time, then the Church is both visible and invisible. For the reformers, the visible Church is identified by two marks: the pure gospel or word and the sacraments rightly administered. However, Hooker speaks of the Church as being both a “society” and as the “mystical” Church, and he points to three different marks identifying the visible church: one Lord, one faith and one Baptism.

In his Learned Discourse, he finds the foundation of this one faith in the New Testament, but believes there are many who hold to that foundation although not seen in the visible Church. Those who deny Christ are not part of the visible Church, but he distinguishes between those who err in “ignorance” and those who err in “stubbornness.” The ignorant are unaware that they hold to error and yet desire to know the truth, while the stubborn are aware of their errors yet persist in them.

In this way, Hooker includes Rome within the visible Church, for Rome does not deny the foundation directly, and he concludes that many who died in the Church of Rome before the Reformation are saved. In Hooker’s ecclesiology, justification by faith alone is not the article by which the visible Church stands or falls. He holds that the Church was there before the Reformation and has always been there since Christ.

Hooker’s sacramental theology and ecclesiology are very different from the magisterial reformers. Instead, he embraces the best of Church tradition, and he draws widely, from the Early Church Fathers to the Scholastics and the Reformers.

Our knowledge of Hooker’s life comes mainly from his biography by Izaak Walton, who was also the biographer of George Herbert and John Donne. Hooker is one of the first “high churchmen” in a tradition that includes Lancelot Andrewes, John Donne and William Laud, and that continued through John Keble, EB Pusey and Charles Gore to this day in Anglicanism.