The lagoon waters at Balos Bay on the north-west tip of Crete (Photograph: Patrick Comerford, 2016; click on photographs for full-screen resolution)

Crete is not the ideal centre for island-hopping on a holiday in Greece. Distances are too great, and so many tourists are happy to stay put on Crete.

There are day trips to Santorini, but they are often expensive and time-consuming. When I took a ferry to Santorini back in the 1980s, I continued on to Athens before eventually making my way back to Crete.

I have also had day trips from Iraklion to Dia, a large uninhabited island, and more recently I have visited Spinalonga, the former leper colony near Aghios Nikolaos. Twenty years ago, in the midst of the Imia crisis that brought Greece and Turkey close to war over some rocky islets in the Aegean, someone cleverly gave the name Imia to some rocky islets off the coast of Chersónisos. 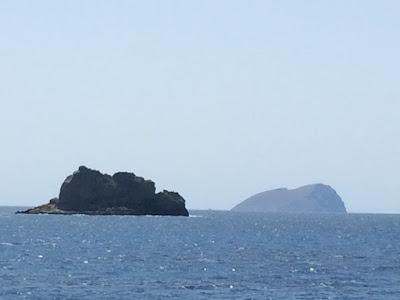 What makes a rocky outcrop an islet, or an islet an island? (Photograph: Patrick Comerford, 2016)

Greece has an extremely large number of islands, and the count ranges from around 1,200 to 6,000. It all depends on the size an island must before it becomes an islet, or even a rocky outcrop, and whether a small islet is an island if it has a number of inhabitants, and whether they need to live there year round.

It also depends on who is counting, and the official enumerators put the number of Greek islands at anywhere between 166 and 227.

The largest Greek island, both by size and population, is Crete, where I am staying in Platanes near Rethymnon. The second largest island is Euboea, but it is separated from the mainland by only 60 metres of water in the Euripus Strait and it is administered not as an island but as part of Central Greece. After these two, the third and fourth largest Greek Islands are Lesbos and Rhodes.

I lost count of the number of Greek islands I have visited a few years ago, but if I ever find the list again I have added one or two more to the list this week with my visits to the lagoon at Balos and the island of Gramvousa, off the north-west tip of Crete.

During the summer season, from May to October, daily cruises leave for Gramvousa and Balos from the post of Kissamos, early in the morning, returning to Kissamos in the evening. 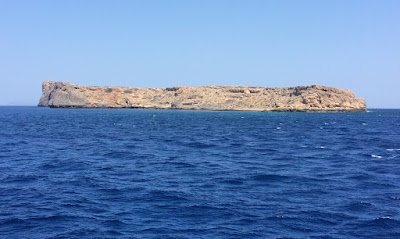 The smaller island of Agria Gramvousa or Wild Gramvousa is one of a pair (Photograph: Patrick Comerford, 2016)


We sailed on the Porto Gramvousa around the Tigani peninsula and across Kissamos Bay, passing a cave that once served as an ancient shipyard. On the way, we could see the signs of the geological phenomenon of land elevation. Crete has been rising out of the sea on its western side for more than 2,000 years and sinking on its eastern side.

We sailed on around Cape Voúxa and then sailed past the smaller island, Agria Gramvousa (Άγρια Γραμβούσα) or Wild Gramvousa. In fact, Gramvousa is not one two small uninhabited islands off the coast of Crete.

We were soon in sight of the larger island itself, Imeri Gramvousa (Ήμερη Γραμβούσα), or Tame Gramvousa, but first our boat took us to Balos Bay, where a small caique took us to the edges of the rocks that encircle the lagoon. 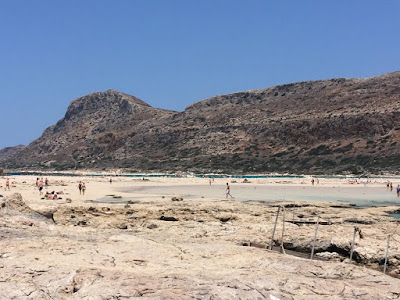 Balos Bay and lagoon look like a desert island in the sun (Photograph: Patrick Comerford, 2016)

We were on an island in all but name, and the water in the lagoon and in the bay was as clear as I have ever seen. Balos Bay and the lagoon have clear aquamarine and turquoise waters and “desert island” sand that links a small cape with the rest of the peninsula. In the rocks, where sea water had collected and then dried out, sea salt had collected and crystallised. 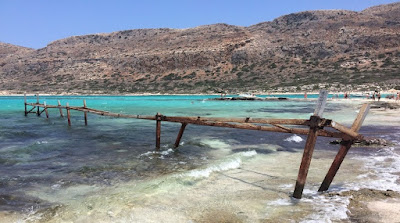 An old rusting, battered and decaying pier is the only human construction at Balos Bay (Photograph: Patrick Comerford, 2016)

There are no beach bars or cafés and, apart from wooden planks that helped visitors to skip off boats or scurry across the rocks, the only human construction was a tiny old rusting, battered and decaying pier that may once have allowed swimmers to jump into the water.

We had time to swim in the shallow, warm waters of the lagoon and in the bay before another small boat took us back to the Porto Gramvousa for the short crossing from Balos to Gramvousa itself.

Gramvousa (Γραμβούσα), also spelled Grampousa (Γραμπούσα) has also been known in the past as Akra, Cavo Buso, Cavo Bouza, Garabusa and Grabusa. The island is crowned with the expansive remains of a Venetian fort. Scattered across the island are the ruins of buildings left behind by Cretan insurgents, who once eked out their existence here as pirates during the Greek War of Independence. 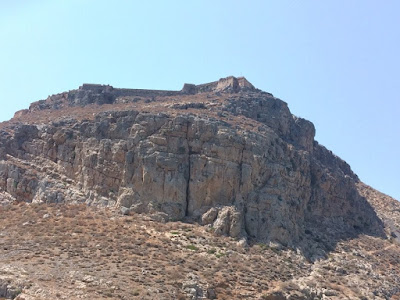 Gramvousa is crowned with the expansive remains of a Venetian fort (Photograph: Patrick Comerford, 2016)

The castle at the top of the island was built by the Venetians between 1579 and 1584 as part of their defences against the Turks along the north coast of Crete from a Turkish invasion. It was one of the last Venetian bastions to fall to the Turks and was also the first part of Crete to be liberated from the Turks.

In a treaty signed on 16 September 1669, Venice surrendered Crete to the Ottomans. But Gramvousa, as well as the fortresses at Souda and Spinalonga, were retained by Venice. These three fortresses defended Venetian trade routes in the Mediterranean and provided strategic bases in the event of a new war for Crete with the Ottoman Empire.

On 6 December 1691, during the sixth Ottoman-Venetian War, or the Morean War, Captain de la Giocca from Naples betrayed the Venetians by surrendering Gramvousa to the Turks in return for a generous bribe. He lived the rest of his life in luxury in Constantinople, where he was known as Captain Grambousas.

When the Greek War of Independence broke out in 1820s, the fort of Gramvousa was captured by Greek rebels. However, the Greek commissioner for Crete, Emmanouil Tombazis, failed to strengthen the defences of Gramvousa after his arrival on the island in 1823. 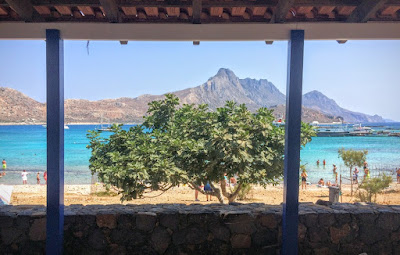 Looking out on Gramvousa bay from the small Church of the Twelve Apostles (Photograph: Patrick Comerford, 2016)

In the summer of 1825, a group of 300 or 400 Cretans, who had fought with other Greeks in the Peloponnese, travelled back to Crete. On 9 August 1825, led by Dimitrios Kallergis and Emmanouil Antoniadis, this group of Cretan fighters, disguised as Turks, captured Gramvousa and made it their base. This was a morale boost for the Cretan independence fighters, and so began the ‘Gramvousa period’ in the history of Crete.

Although the Ottoman Turks did not retake the fort, they succeeded in blocking the spread of the rebellion to western Crete. For more than two years, the rebels were besieged and they started looting passing boats, and Gramvousa became known as a pirate island.

The population of Gramvousa became organised and built a school and a church that was called Panagia i Kleftrina, or ‘Our Lady of the Wives of the Klephts or pirates.’

But the pirates were damaging trade between Turkey and Egypt with Europe, and in 1828, the Greek president, Ioannis Kapodistrias, sent Alexander Mavrocordatos with British and French ships to Crete to subdue the pirates. On 5 January 1828, Hatzimichalis Dalianis landed at Gramvousa with 700 men, all pirate ships were destroyed and the fort came under British control for a brief period.

Eventually, the Turks ceded Crete to the Greeks in 1898, along with Gramvousa, and Crete was incorporated in the modern Greek state in 1913. 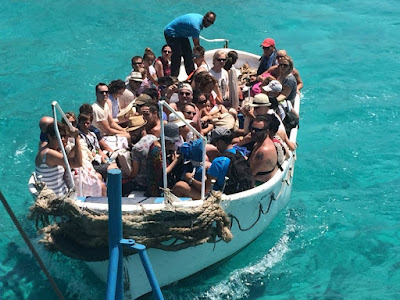 Hopping about in boats between Balos Bay and Gramvousa (Photograph: Patrick Comerford, 2016)

Today there are legends and stories about hidden pirate treasure on the island, but the one rusty shipwreck at the end of the beach that looks like a pirate shipwreck is nothing of the sort. The Dimitrios P wrecked here almost 50 years ago in a winter storm early in 1968 while it was carrying a shipload of cement to Libya.

The tiny church above the sandy beach in the bay is not the pirates’ church, but a later church dedicated to the Twelve Apostles.

It was late in the day when we left to return to Kissamos and catch the bus back to Rethymnon. 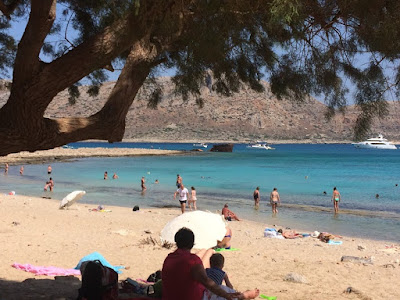 The ‘pirate ship’ on the bay at Gramvousa is the 50-year-old wreck of a cement carrier (Photograph: Patrick Comerford, 2016)

Posted by Patrick Comerford at 07:04 No comments: