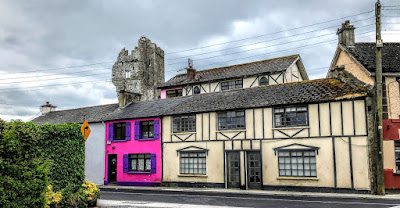 Askeaton can be colourful in the early morning despite grey skies (Photograph: Patrick Comerford, 2020)

Since mid-March, I have been semi-cocooning in the Rectory in Askeaton, partly because of concerns about my pulmonary sarcoidosis that have been compounded by concerns about the Covid 19 pendemic, and partly due to concern for neighbours and parishioners.

But semi-cocooning does not mean isolation. I continue to celebrate the Eucharist on Sunday mornings, albeit in the Rectory, and to be involved in ringing the bell at Saint Mary’s Church, Askeaton, on Sunday mornings too.

I am working regularly, keeping in touch with parishioners, welcoming occasional visitors who have manage to keep their ‘social distance’ with grace, and providing weekly online liturgical resources for priests and readers in these dioceses and further afield. 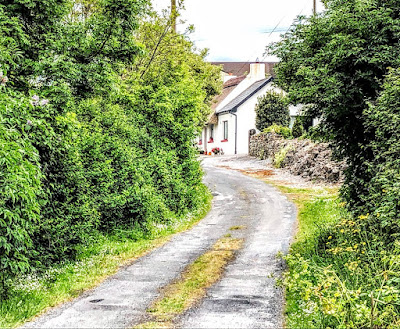 A thatched cottage near the River Deel in Askeaton (Photograph: Patrick Comerford, 2020)

I take part in a number of webinars, involving members of the cathedral chapter, school boards meetings, USPG trustees, occasional conversations organised by the Institute for Orthodox Christian Studies in Cambridge, and the weekly ‘Sephardi Academia’ seminars on Sephardic history organised by the Bevis Marks Synagogue in London.

Each day, I go for a lengthy walk around the rectory gardens, which keeps me fit, increases my daily walking average, and provides me with an opportunity to listen to music without disturbance or distraction.

Although most of my travel plans have been cancelled or abandoned, I have indulged in a number of ‘virtual tours’ in my blog postings, visiting favourite places in Ireland, England, Greece, Italy, Spain and other countries.

I am missing many of those places, but I am also missing walks on some of my favourite beaches, walks on beaches and by river banks, those double espressos in my favourite cafés, walking around the towns in these parts of Ireland noticing architectural buildings and archaeological sites, and eating out in my favourites restaurants. I am missing being able to buy The Irish Times and the Guardian every day. But, most of all, I miss opportunities to meet family members, friends and parishioners. 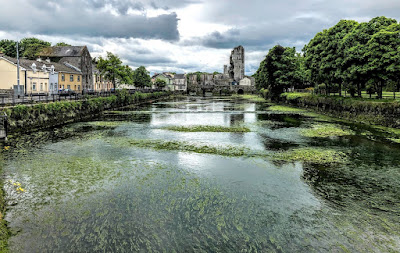 An early morning by the River Deel in Askeaton (Photograph: Patrick Comerford, 2020)

But, over the past two months, I have not been totally confined to the rectory and the rectory gardens. Each Sunday, two of us take advantage of the quiet early hours at the beginning of the week, and go for a long walk through Askeaton, by both banks of the River Deel, by the ruins of the old Franciscan ‘Abbey,’ crossing the bridges, climbing the steps, and around the labyrinth behind the ‘other Saint Mary’s Church,’ the Roman Catholic parish church at the west end of Askeaton.

On these spring mornings, the clear nights and the morning heat means a hazy mist can rise up from the river, giving a grey colour to skies, and it can take some hours for the skies to turn blue and the clouds to break up into smaller white patches. It has remained grey for most of the day today, for example.

But on mornings when the grey breaks up, Askeaton becomes a very colourful and cheerful place, both in the variety of the colours on the houses and buildings, and the colourful flowers in the gardens and by the roads. 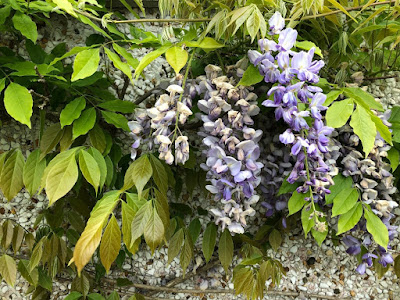 Wisteria in Askeaton and wistful memories of days in Cambridge (Photograph: Patrick Comerford, 2020)

These are simple delights. In recent weeks, a wall in Deel Manor has been covered in wisteria, and although it is now starting to fade it has been a wistful reminder of days at this time of the year in Sidney Sussex College, Cambridge.

These are all signs of life and signs of hope. This lockdown is beginning to be lifted slowly. I may have sarcoidosis, but sarcoidosis does not have me.

Soon, hopefully, life will begin to return to normal in those places I know and love. 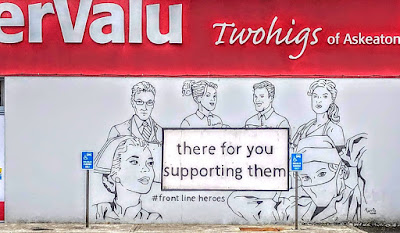 Signs of hope at SuperValu in Askeaton (Photograph: Patrick Comerford, 2020) 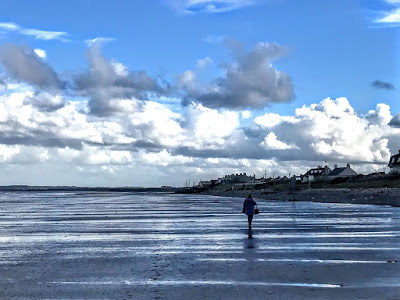 ‘Pray for all those who are self-isolating, that they will have a sense of God’s reassuring presence in the midst of their solitude’ (Photograph: Patrick Comerford)

Although our churches remain closed, I am also continuing to use the USPG Prayer Diary, Pray with the World Church, for my morning prayers and reflections throughout this Season of Easter.

Throughout this week (17 to 23 May 2020), the theme of the USPG Prayer Diary is ‘Ascension Day: Mystery and Infinity.’ The Rev’d Canon Richard Bartlett, Director of Mission Engagement at USPG, introduced this theme in the Prayer Diary yesterday morning.

Pray for all those who are self-isolating, that they will have a sense of God’s reassuring presence in the midst of their solitude.