‘And let our ordered lives confess
the beauty of thy peace’ 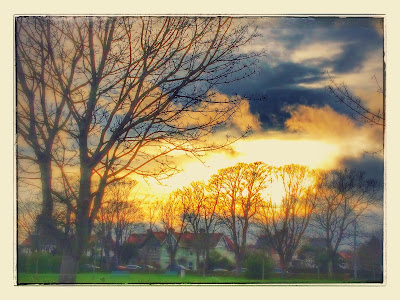 ‘Breathe through the heats of our desire / Thy coolness and thy balm’ … sunset in Greystones this afternoon (Photograph: Patrick Comerford, 2015)

After two busy days in Christ Church Cathedral, Dublin, with the consecration of Bishop Kenneth Kearon as Bishop of Limerick and Killaloe, I expected this would be a quiet morning in the cathedral today, perhaps slipping quietly into my new stall as the fifth canon to quietly enjoy the Cathedral Eucharist being sung to Judith Bingham’s setting, Missa Brevis, ‘Awake My Soul’.

Instead, I was asked to be deacon, reading the Gospel and assisting at the administration of the Holy Communion. This is always a humbling privilege rather than a right, and in the stillness I found at times in the cathedral this morning, it was interesting to find a number of reminders and echoes of TS Eliot in Judith Bingham’s work this morning, as this year marks the fiftieth anniversary of the death of TS Eliot.

Judith Bingham is a much sought-after composer. She has written a Magnificat and Nunc Dimittis for King’s College, Cambridge, and diverse anthems and church works for Lichfield Cathedral, the Lichfield Festival, Winchester Cathedral, Westminster Abbey, Saint John’s College Cambridge, Westminster Abbey, Wells Cathedral and the Edington Festival at Edington, a small village on the edge of Salisbury Plain in Wiltshire She has also written three settings of the Missa Brevis, two sets of Evening Canticles, and many anthems. 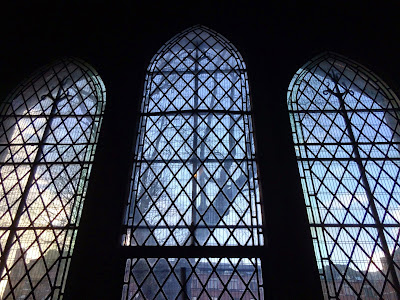 A calm moment in the Chapter House before this morning’s Cathedral Eucharist (Photograph: Patrick Comerford, 2015)

This morning’s Missa Brevis, ‘Awake My Soul’ was commissioned for the fiftieth anniversary of the consecration of Bromley Parish Church, Saint Peter and Saint Paul, in 1957 after it had been razed by German bomb in 1941.

“I wanted the dramatic progression of the Mass to be about rebuilding,” she said later. Her Kyrie, she said, evokes “walking amid the ruins of the church, desolation, despair.” Echoing TS Eliot, she headed this Kyrie: “A wasteland: the ruins of a sacred building.”

Her Gloria unfolds from the “decision to rebuild – a sense of renewed hope.” Her heading is: “The rebuilding begins.” Her Sanctus enshrines the solemnity of the new church’s consecration, and is headed: “The consecration of the house.” Her Agnus Dei, she says, turns to “the forgiveness of enemies,” a process led by the rebuilding of trust and the recognition of humanity’s mutual interdependence. The heading reads: “As we forgive them.”

The Communion Motet this morning was Judith Bingham’s anthem, The Clouded Heaven, based on words by Lancelot Andrewes (1555-1626) and William Wordsworth (1770-1850):

Be with me Lord and speed me on my way,
Thou who didst speed the way of the Wise men
by the leading of a star.
I could not lightly pass through the same gateways,
Sleep where they had slept, wake where they wak’d,
I was the Dreamer, they the Dream.

Be with me Lord and speed me on my way,
Thou who didst speed the way of the Wise men
by the leading of a star.
If Thy presence go not with me
Let the stars come out, the clouded heaven
Blot out O Lord as a thick cloud of night our transgressions,
And bring us safely home again.

Judith Bingham was commissioned jointly by the Dean and Chapter of Winchester Cathedral and by Ruth Daniel, a long-standing supporter of the Choir of Saint John’s College, Cambridge, to write The Clouded Heaven. It received simultaneous premieres at Winchester Cathedral and Saint John’s College, sung by their choirs directed by David Hill and Christopher Robinson respectively, at their 1998 Advent Sunday services.

Her choice of texts reflect both commissioners, a conflation of words from a prayer by Lancelot Andrewes, 17th century Bishop of Winchester, and William Wordsworth’s ‘On First Entering St John’s Cambridge.’ These words of Lancelot Andrewes are from a sermon that deeply influenced TS Eliot, and that inspired his poem ‘Journey of the Magi.’

The music has a quality of anxiousness reflecting Bingham’s inspiration behind the work: “I always think of Advent as the time when the Magi are making their unsafe journey towards the Nativity and so wanted to suggest a spiritual journey into the unknown. I was hugely influenced at that time by my experience of an Alpine starry landscape and wanted to try and capture my feelings of awe and wonderment in the music.”

Our Post-Communion hymn this morning was John Henry Newman’s great Trinitarian hymn, ‘Firmly I believe and truly,’ from The Dream of Gerontius, and sung to Ralph Vaughan Williams’s tune Shipston. Vaughan Williams found this English folk tune at Halford, near Shipston-on-Stour in Warwickshire – a simple tune that works so well with these weighty words.

We also sang John Greenleaf Whittier’s ‘Dear Lord and father of mankind’ to Hubert Parry’s setting, Repton. Parry originally wrote the music for what became Repton in 1888 for the contralto aria, ‘Long since in Egypt's plenteous land,’ in his oratorio Judith. In 1924 Dr George Gilbert Stocks, director of music at Repton School, set it to ‘Dear lord and father of mankind’ in a supplement of tunes for use in the school chapel.

We had been discussing the concepts and values of ‘Sabbath’ in the college chapel in the Church of Ireland Theological Institute this past week, and were reminded of Whittier’s words in this hymn:

O Sabbath rest by Galilee!
O calm of hills above,
Where Jesus knelt to share with thee
The silence of eternity,
Interpreted by love! 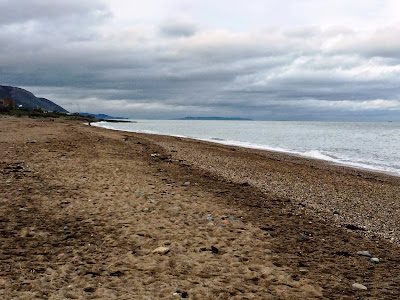 Strolling on the beach in Greystones this afternoon (Photograph: Patrick Comerford, 2015)

After a busy week and a busy weekend, two of had a Sabbath-like rest by the sea later in the day when we went to Greystones, Co Wicklow, for a late lunch in the Happy Pear – with two very welcome double espressos – before a walk on the beach.

As we walked along the beach in softness of the sand, listening to the gentle roll of the tide on the shoreline, the sun was beginning to set slowly in the west, and I thought again of those stanzas in our Post-Communion hymn this morning:

Drop thy still dews of quietness,
Till all our strivings cease:
Take from our souls the strain and stress,
And let our ordered lives confess
The beauty of thy peace.

Breathe through the heats of our desire
Thy coolness and thy balm;
Let sense be dumb, let flesh retire;
Speak through the earthquake, wind and fire,
O still small voice of calm! 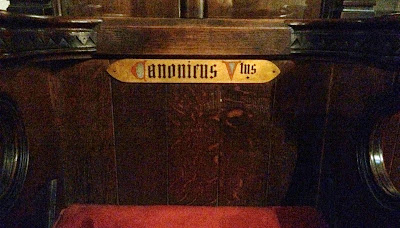 The stall of the Fifth Canon, between the Chancellor and the Prebendary of Saint John’s, in the chapter stalls in Christ Church Cathedral, Dublin (Photograph: Patrick Comerford, 2015)