‘Everybody needs places where nature
gives strength to body and soul’ 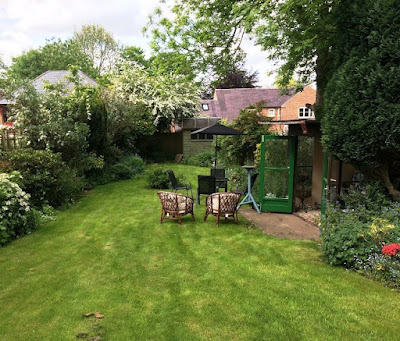 ‘Everybody needs beauty as well as bread’ … in the garden at Dr Milley’s Hospital in Lichfield in early summer (Photograph: Patrick Comerford, 2015)

At the beginning of this week, I heard a quotation from John Muir: “Everybody needs beauty as well as bread, places to play in and pray in, where nature may heal and give strength to body and soul.” The speaker illustrated this quotation with a photograph of his own back garden, and in my mind’s eye I was brought back immediately to the simple beauty of the garden I visited in early summer [30 May 2015] when I was on a visit to Dr Milley’s Hospital in Lichfield with the local history group, Lichfield Discovered.

My mind wandered momentarily, and I was soon in the garden of the Hedgehog on Stafford Road, Lichfeld, and then walking along Cross in Hand Lane in the sunshine of early summer.

This is a difficult winter in Ireland, with storms, heavy rain and floods throughout the island, and it was good in the middle of this bleak winter to be brought to a place of beauty where nature regularly heals and gives strength to my body and my soul. 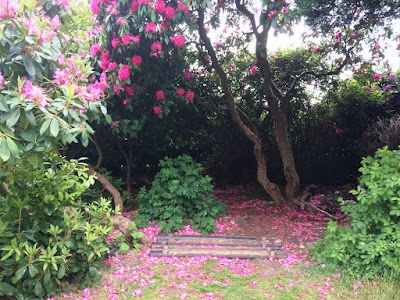 In the garden of the Hedgehog in Lichfield earlier this year (Photograph: Patrick Comerford, 2015)

But I then asked: who was John Muir, and why is he honoured alongside Hudson Stuck with a feast day on 22 April in the liturgical calendar of the Episcopal Church in the US?

John Muir (1838-1914) was a Scottish-born American naturalist, author, and an early advocate of the preservation of the wilderness in the US. His letters, essays and books telling of his adventures in nature, especially in the Sierra Nevada mountains of California, have been read by millions.

He was born in Dunbar in Scotland and in 1849 emigrated with his family to the US. By the age of 11, he had learned “by heart and by sore flesh” to recite all the New Testament and most of the Old Testament.

Later in life, Muir came to believe that God was always active in the creation of life and thereby kept the natural order of the world. As a result, Muir saw himself as a John the Baptist, whose “duty was to immerse in ‘mountain baptism’ everyone he could.” He saw nature as a great teacher, “revealing the mind of God,” and this belief became the central theme of his later journeys and the subtext of his writings.

Throughout his life, Muir continued to experience the “presence of the divine in nature.” His personal letters also conveyed these feelings of ecstasy. Muir often referred to himself as a disciple of Henry David Thoreau, but he historian Catherine Albanese says that in one of his letters, “Muir’s Eucharist made Thoreau’s feast on wood-chuck and huckleberry seem almost anaemic.”

Muir helped to save the Yosemite Valley, Sequoia National Park and other wilderness areas, and he founded the Sierra Club, now one of the most important conservation organisations in the US.

Because of the spiritual quality and enthusiasm of his writings, Muir inspired his readers, including Presidents and members of Congress, to take action to help preserve large nature areas. He was an early contributor to the debates about the cultural, social and political environment that would eventually lead to the debates that have brought us to the climate change talks that are coming to a close in Paris this evening [11 December 2015].

From his early religious training under his father, he retained “this belief, which is so strongly expressed in the Old Testament, that all the works of nature are directly the work of God.”

In his Travels in Alaska, Muir wrote: “Every particle of rock or water or air has God by its side leading it the way it should go; The clearest way into the Universe is through a forest wilderness; In God’s wildness is the hope of the world.” He believed that “no portion of the world is so barren as not to yield a rich and precious harvest of divine truth.”

Hudson Stuck (1863-1920) was an Episcopal priest and is best known for co-leading the first expedition to successfully climb Mount McKinley in Alaska. He was also a social reformer in Texas and Alaska.

Stuck was born in London and studied at King’s College London. He moved to Texas, and from 1896 to 1904 he was the Dean of Saint Matthew’s Cathedral, Dallas. He was vocal about the need for social reforms, condemned lynching, and worked for gun control and the expansion of recreational areas. He also founded a night school for millworkers and was instrumental in securing child labour laws in Texas.

In 1904, he moved to Alaska, where he became the Archdeacon of the Yukon and the Arctic. There he worked for the rights of Indians and Eskimos, and organised and the first successful ascent of Mt McKinley (Denali) in 1913. On reaching the summit, Stuck led the climbers in prayer and thanksgiving. He later wrote of the experience as a “privileged communion” to be received in awe and wonder.

A year later, Stuck wrote to Muir on 17 June 1914, praising his writings as “one of the dearest, sweetest influences of the literature of today,” and predicting that they would “become classics with those who love the face of Nature.”

In 2009, John Muir was added along with some 100 new names included in Holy Women, Holy Men. He is also celebrated in “The Dancing Saints Icons” project at Saint Gregory of Nyassa Episcopal Church in San Francisco, by the icon writer Mark Dukes. Muir is depicted with 100 other saints in a 2,300 sq ft mural that encircling the rotunda walls of the church.

The church marked the centenary of John Muir’s death last year [2014], saying: “We remember that God’s word is revealed by John Muir’s own habits of attention, surrender and praise, and invite everyone to practice noticing wild glory in every place, every day.”

John Muir once wrote: “No synonym for God is so perfect as Beauty. Whether as seen carving the lines of the mountains with glaciers, or gathering matter into stars, or planning the movements of water, or gardening – still all is Beauty!” 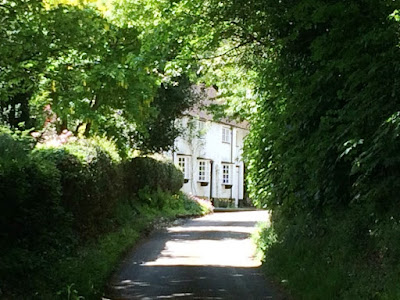 Waiting in Advent 2015 with
Dietrich Bonhoeffer (13) 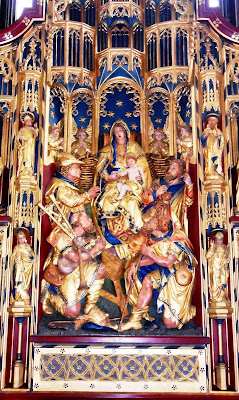 ‘No priest, no theologian stood at the manger of Bethlehem’ ... the shepherds in the Nativity scene on the carved reredos in the Lady Chapel in Lichfield Cathedral (Photograph: Patrick Comerford)

We are half-way through the season of Advent today [11 December 2015], and with just two weeks to go to Christmas Day I am reflecting and praying each morning with my own Advent Calendar. Throughout this Advent, as we wait and prepare for Christmas, I am inviting you to join me each morning for a few, brief moments in reflecting on the meaning of Advent through the words of the great German theologian and martyr, Dietrich Bonhoeffer (1906-1945).

In a challenge to all theologians, Bonhoeffer once wrote:

“No priest, no theologian stood at the manger of Bethlehem. And yet all Christian theology has its origin in the wonder of all wonders: that God became human. Holy theology arises from knees bent before the mystery of the divine child in the stable.

“Without the holy night, there is no theology. ‘God is revealed in flesh,’ the God-human Jesus Christ – that is the holy mystery that theology came into being to protect and preserve.”