Chasing Pugin and walking on the beach

Everyone seems to have gone home for the bank holiday weekend: there were just three of in the chapel this morning for the Litany. But spiritual riches are founded not on numbers.

I spent the rest of the morning with my GP, for a consultation on my Vitamin B12 deficiency and my sarcoidosis, and another jab in the arm.

Just for a fleeting moment I thought most of the day had passed in the waiting room. But autumn this year had stretched out for an extra few weeks, the skies were turning grey, and thought it a shame to waste the rest of this day, the first day of the bank holiday weekend.

Two of us headed off to Wexford, and it was lunchtime by the time we came off the motorway at Ferns. We followed the Slaney down through Scarawalsh to Enniscorthy, and on to Edermine, where we crossed the river and the railway line and headed west to Bree, to look at Pugin’s Church of the Assumption, one of his first churches in Co Wexford, built between 1837 and 1840.

There was a funeral there today, and I wondered would we have managed to get inside otherwise.

From Bree, we headed down to Killurin, and I recalled Norrie Ruddock’s funeral here on the banks of the Slaney.

We followed the Slaney on down to Wexford, and headed west to Barntown, to look at another Pugin church, the Church of Saint Alphonsus, built in 1844-1848. There was a wedding there this afternoon, but it was still possible to photograph the outside of the church.

From there it was on to Tagoat, where Saint Mary’s Church, another Pugin gem, was built between 1843 and 1846. Thankfully the church was open, and it was a pleasure to photograph it inside and outside.

I had no beach walk yet this week, and we thought of heading on to Rosslare Strand, where I had lived briefly in 1974. But roadworks probably made the decision for us, and instead we headed down to Kilmore Quay.

It is hard to imagine that I was probably last in Kilmore Quay in 1974. Even though I have been through Co Wexford regularly, year-by-year since, the nearest I came to getting back to Kilmore Quay was taking part in the sit-ins on the site of the proposed nuclear power station at Carnsore Point in the late 1970s and early 1980s. 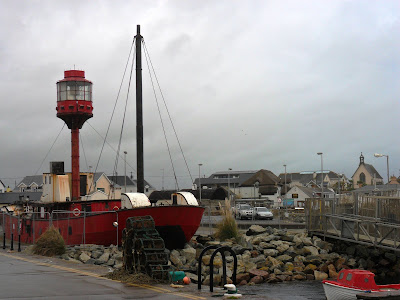 The Guillemot and the harbour at Kilmore Quay, with the village rising above (Photograph: Patrick Comerford, 2010)

I suppose Kilmore Quay could be described as the Kinsale or the Dingle of south Co Wexford. It is a picturesque village in a picture-postcard sort of way with its thatched cottages, its quaint pubs and its narrow streets. But the autumn lights were fading as we got there late in the afternoon, the winds were stirring up and the rains were threatening.

First we stopped into the Silver Fox for a late – a very late – lunch and a half bottle of wine. Then we had a walk along the beach beside the Quay, and from the little beach looked out at the Saltee Islands and recalled old tales about the capture of Bagenal Harvey in 1798 and the King of the Saltees in the 1950s or 1960s. Then it was a walk along quay ... the sea breeze was breaking over the walls, and even the surface water in the harbour looked choppy. And it was sad to see the Guillemot, the Wexford Maritime Museum which once graced the quays in Wexford Town, is now neglected, rusting and fenced off, with danger notices warning the curious away.

Looking out at the Saltee Islands from Kilmore Quay (Photograph: Patrick Comerford, 2010)

From there it was over to the small crescent shaped beach on the east side of the village. The waves were less forceful, less vociferous, but it was still obvious that winter is only weeks away.

After looking inside Saint Peter’s, the parish church inspired by Pugin and the Gothic Revival in Co Wexford, we had a look at the Wooden House, one of the most interesting thatched buildings in Kilmore Quay. It was owned by the Furlong family from the 17th or 18th century, and the family was badly treated in 1798 in the search for Bagenal Harvey and other leaders of the United Irishmen, who were hiding in a cave on the Saltee Islands. Much of the house was extended in the 1860s with wood salvaged from a Greek ship that was shipwrecked nearby in the 1860s, with sad loss of all 16 Greeks on board.

On the way back into Wexford, I wondered, just wondered, whether we might get into Pugin’s church in Barntown. The rain was now coming down, but there was light inside. The journey was worth it ... this is one of the most beautiful parish churches I have visited anywhere in Ireland. It was a wonderful climax to the day.

On the way back, we stopped briefly in Ferns. It had been a perfect day. I must write about those Pugin churches in Bree, Tagoat and especially in Barntown over the next few days.
Posted by Patrick Comerford at 22:50 1 comment: