With the Saints in Lent (22), Baldred of Scotland, Bishop of Glasgow, 6 March 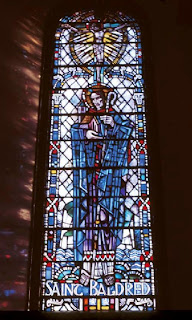 The Calendar of the Scottish Episcopal commemorates Baldred of Scotland, Bishop of Glasgow, today [6 March]. But who is the Saint Baldred who is commemorated among the saints today?

There was Baldred (ca 643 – ca 607) who was Bishop of Strathclyde and who died at Aldhame in Haddingtonshire ca 607. He is said to have been the immediate successor of the great Saint Kenigern or Saint Mungo, the founder of the See of Glasgow. Like Saint Kenigern, he was of Irish ancestry, but is counted as a Scottish saint.

The details of his life are obscure, but it is said that Saint Baldred was born in the mid-6th century. Before he became a bishop, Saint Baldred had worked for many years in Strathclyde, where he founded numerous monastic houses and churches in Aldhame, Tyinguham and Preston Kirk.

He was eventually forced to leave Strathclyde. He ended his days as a hermit on the coast of the Firth of Forth, about a mile from North Berwick where the great Bass Rock rises 460 ft out of the sea. A late medieval tradition, found in the Aberdeen Breviary (1510), says he died in the year 607 or 608. His feast day is observed today [6 March].

Numerous miracles were ascribed to this Baldred, an Englishman linked with the See of Lindisfarne. Some writers have imagined that this Baldred is identical with Bilfritt, or Bilfrid, a hermit goldsmith, whose exquisite work is on the cover of the Gospels of Saint Cuthbert, made when Eadfrid and Ethelwold were Bishops of Lindisfarne (698-740).

The relics of Saint Bilfrid were placed with those of Saint Baldred in Saint Cuthbert’s shrine at Durham, but were subsequently transferred to the shrine of Saint Bede in 1104.

A Prayer of Saint Baldred (from the Aberdeen Breviary, 1510):

O God, who through the contemplative life of the blessed Baldred, thy bishop and confessor, hast conferred ineffable grace on thy servants; grant, we beseech thee, that by his merits and intercessions we may be able to obtain in all things the saving help of thy mercy. Through our Lord, Amen.