The underbelly of the establishment
unleashes ugly scenes on the streets 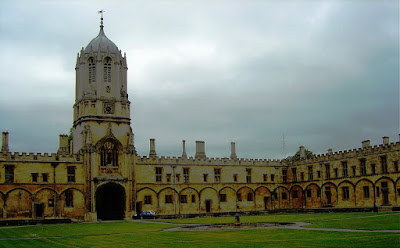 In Evelyn Waugh’s ‘Brideshead Revisited,’ Anthony Blanche recalls how the Bullingdon Club tried to ‘put him in Mercury,’ the fountain in the centre of Tom Quad at Christ Church, Oxford (Photograph: Patrick Comerford)

I was recalling earlier this week how the English writer Evelyn Waugh once planned to buy Gormanston Castle and estate in Co Meath.

Waugh withdrew his bid when he read about Sir Billy Butlin’s plan to build a holiday camp at Mosney, on the coast near Gormanston, and I wondered how Waugh’s innate snobbery had changed my life: the Franciscans stepped it, bought Gormanston Castle from the young Lord Gormanston’s widowed mother, and set up the school that both my brother and I were sent to.

Gormanston Castle might have been the ideal setting for some pre-war Irish version of Brideshead Revivisited, and one of his novels – Decline and Fall (1928) – is set in a boarding school in a castle in north Wales.

Waugh was a social satirist but also an incurable snob. Yet in both these novels he is at his best when he describes the boorish behaviour of the Bullingdon Club in Oxford and its members.

In Decline and Fall, the Bullingdon Club is satirised by Waugh as the Bollinger Club – after the brand of champagne – where it plays a pivotal role in the plot, as the mild-mannered hero is blamed for the Bollinger Club’s destructive rampage through his college and is sent down.

Decline and Fall was Waugh’s first published novel and with characteristic black humour it lampoons many elements of British society in the 1920s.

The title alludes to both Edward Gibbon’s The History of the Decline and Fall of the Roman Empire, and the German philosopher Oswald Spengler’s The Decline of the West (1926), which argued that the rise of nations and cultures is inevitably followed by their eclipse.

The novel tells the story of Paul Pennyfeather, a modest and unassuming theology undergraduate at Oxford who falls victim to the drunken antics of the Bollinger Club and is then sent down for indecent exposure after running without his trousers through the grounds of Scone College, which may represent Balliol College.

As he leaves, the porter says: “I expect you'll be becoming a schoolmaster, sir ... that’s what most of the gentlemen does, sir, that gets sent down for indecent behaviour.”

The porter’s expectations are realised. Having lost his inheritance too, Pennyfeather is forced to take a job teaching at Llanabba Castle, a minor public school in Wales. There he becomes private tutor to one of the boys, Peter, and falls in love with Peter’s mother, the Hon Margot Beste-Chetwynde (pronounced ‘Beast Chained’).

But her income comes from high-class brothels, and he is arrested on the morning of their wedding, and is jailed for seven years for trafficking in prostitution. Pennyfeather fakes his own death, escapes and is later sent off to Corfu on Margot’s yacht, “to decide on things.”

He then returns to Scone and Oxford, where he studies theology under his own name, but posing as the distant cousin of Paul Pennyfeather who was sent down. The novel ends as it started, with Pennyfeather sitting in his room listening to the distant shouts on a night when the Bollinger Club is meeting. There, Peter Beste-Chetwynde, now Earl of Pastmaster, is a student at Scone and a member of the Club. He drinks himself to death, telling Pennyfeather he should never have gotten caught up with his family.

There are distasteful scenes of racism, running to four or five pages or more, where Waugh has fun at the expense of the racists, but uses language that is frightening when we hear it on the streets in recent days after last week’s British referendum.

The late Tom Driberg, who was at school in Lancing with Evelyn Waugh, claims Waugh’s description of the Bollinger Club is a “mild account of the night of any Bullingdon Club dinner in Christ Church. Such a profusion of glass I never saw until the height of the Blitz. On such nights, any undergraduate who was believed to have ‘artistic’ talents was an automatic target.”

Waugh names the Bullingdon Club in Brideshead Revisited. In talking to Charles Ryder, Anthony Blanche recalls how the Bullingdon tried to “put him in Mercury” in Tom Quad one evening. Mercury is a large fountain in the centre of the Quad at Christ Church.

Blanche describes the members in their tails as looking “like a lot of most disorderly footmen,” and goes on to say: "Do you know, I went round to call on Sebastian next day? I thought the tale of my evening’s adventures might amuse him.” This may indicate that Sebastian was not a member of the Bullingdon, although the 1981 television adaptation shows Lord Sebastian Flyte vomiting through the window of Charles Ryder’s college rooms while wearing the Bullingdon tails

The 2008 film adaptation also shows Sebastian in Bullingdon Club tails in this scene, as his friends behind him chant: “Buller, Buller, Buller!”

The Bullingdon Club was founded in 1780 as a sporting club, dedicated to cricket, hunting and horse-racing, but club dinners soon became its principal activity. The Wisden Cricketer says the Bullingdon is “ostensibly one of the two original Oxford University cricket teams, but it actually used cricket merely as a respectable front for the mischievous, destructive or self-indulgent tendencies of its members.” The future Poet Laureate John Betjeman wrote in 1938 that “quite often the Club is suspended for some years after each meeting.”

The Bullingdon Club is an unofficial and exclusive all-male dining club at Oxford, similar to the Pitt Club in Cambridge. It is known for privileged members, grand banquets and boisterous rituals, such as vandalising or trashing restaurants and college rooms, and a tradition of paying on-the-spot for damages.

The University of Oxford gives the club no official recognition, and many local restaurants refuse to host its events. But many former members have become part of the British political establishment, including David Cameron, Michael Gove, George Osborne and Boris Johnson. 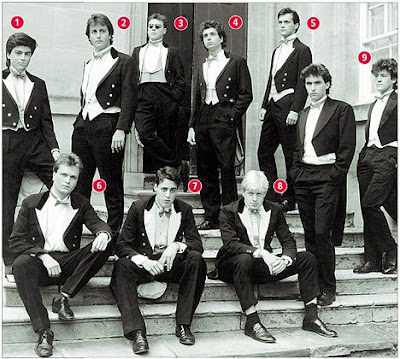 A 1987 photograph of then members of the Bullingdon Club, including David Cameron and Boris Johnson, was revealed in 2007. Since then, the copyright owners have tried to block all use the picture.

The photograph was taken in 1987 at Brasenose College, where Cameron was an undergraduate. Included in the photograph are: 1, The Hon Edward Sebastian Grigg, the heir to Lord Altrincham of Tormarton and later chairman of Credit Suisse; 2, David Cameron; 3, Ralph Perry Robinson, a former child actor – at Oxford he paraded round dressed as a monk calling for virgins to be sacrificed; he now lives in Wiltshire, where he makes furniture; 4, Ewen Fergusson, son of Sir Ewen Fergusson, the British ambassador in France, and now at City law firm Herbert Smith; 5, Matthew Benson, heir to the Earl of Wemyss and March; 6, Sebastian James, the son of Lord Northbourne, a landowner in Kent; 7, Jonathan Ford of the Financial Times and Morgan Grenfell; 8, Boris Johnson; and 9, Harry Eastwood, investment fund consultant.

In an interview with Andrew Marr of the BBC, Cameron said the 1987 photograph was an embarrassment. It was withdrawn from circulation when the Oxford-based company Gillman and Soame, which owns the copyright, was persuaded to withhold further permission to use it.

A similar photograph taken in 1988, with Cameron in the centre of the group, was found by the student newspaper Versa among over a dozen or so photographs of the club from 1950 to 2010 hanging on the wall of the tailor said to have made the members’ suits. This find led to other past members being named. 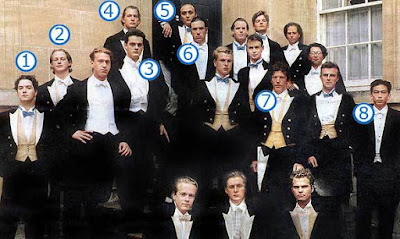 In the Mail on Sunday, Peter Hitchens said the photograph had been doctored and that some people had been removed.

Two figures on the left of Peter Holmes à Court (6) and Nat Rothschild (7) were blacked out before the photograph was released, leading to allegations about two members of the Bullingdon Club whose identities were being protected.

These photographs could have embarrassed Cameron, Johnson, Osborne and Gove during the run-up to last week’s referendum. But as I reflect on the events of the last few weeks, it looks like Johnson and Gove engineered a Bullingdon Club coup against former members, gambling their careers with the future of Europe used as part of their game of roulette. I can just see Cameron as Sebastian Flyte vomiting out the window while wearing the Bullingdon tails, as his fellow club members Johnson and Gove stand behind him and chant mockingly: “Buller, Buller, Buller!”

Looking again at these photographs that the Bullers do not want us to see, alongside a re-reading of Evelyn Waugh’s novels, they reveal the ugly underbelly of the British political and social establishment that is closing ranks this week rather than taking responsibility for the horrors they have unleashed and the consequent rise in ugly expressions of naked racism on the streets.