Multicolour celebration: a Symposium on Liturgy and Music 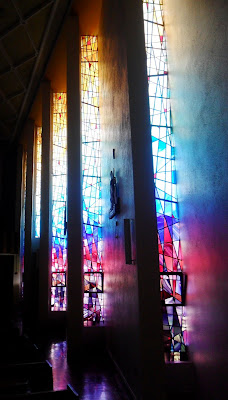 A major liturgical conference on liturgy and music, “Multicolour Celebration: a Symposium on Liturgy and Music,” took place at the end of last month at the Dominican Monastery in Huissen in the Netherlands, founded in 1858.

The symposium, on Friday 25 and Saturday 26 March 2011, was an initiative of the the Creative Worship Working Group, and was organised with the support of the Service Organisation of the Protestant Church, the Dutch daily newspaper, Nederlands Dagblad and the Calvin Institute of Christian Worship in Grand Rapids.

I was honoured that my photograph from the chapel in my old school was used to illustrate the cover of the 88-page printed conference programme and worship guide.

The caption inside on page 3 reads:

“Cover Photo: stained glass windows in the chapel of Gormanston College, a secondary (boarding) school in Ireland, built in the 1950s (photo: Patrick Comerford)”
Posted by Patrick Comerford at 06:00 No comments: