A walk by the banks of the River Dodder 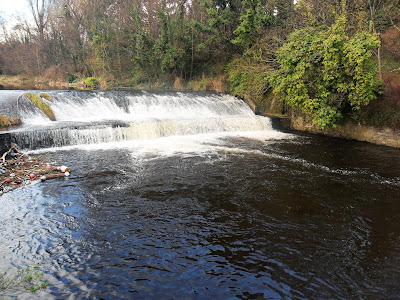 The River Dodder below the bridge at Rathfarnham Road this afternoon (Photograph: Patrick Comerford, 2011)

I was never going to have a walk on the beach this weekend. It was a working weekend, but it finished up in time to have a walk along the banks of the River Dodder before heading home to watch the Ireland V France match.

I began at the Ely Triumphal Arch or gate, at the bottom of the hill below the Theological Institute. The arch was built by the banks of the Dodder by Henry Loftus to celebrate the return of the Loftus family to nearby Rathfarnham Castle in 1767. Over two years ago, I wrote about how the arch was decaying, desolate and abandoned, covered in graffiti, its former dignity betrayed by cement blocks, and access is denied by boulders.

In recent works, some restoration work has been done on the arch, and the graffiti has been cleaned up. But in many parts it is still decaying, the iron gates are still crumbling, cement blocks still fill in places once filled with windows and doors, rubble and builders’ fencing are strewn around the site, and the arch still appears to be decaying, desolate and abandoned, serving solely as an indecorous traffic island.

As I said at the time, unlike triumphal arches in other capital cities, this isolated memorial serves only as an indecorous traffic island. Without further remedial restoration work, I still believe that this sad relic that once told a story of adversity and triumph may soon be lost to the neighbourhood and to future generations. The advent of the 250th anniversary in 2017 surely should provide stimulus for the restoration of this fading piece of architectural glory, which is an integral part of an important work of 18th century architectural art.

From the arch, I moved on down to the banks of the River Dodder. Birds were chirping, magpies were furtive, but there was no heron to be seen. The waters were rushing, and by the time I reached the Pearse Bridge at Rathfarnham Road the waters were tumbling over the small waterfall down into busy pools below.

Between the waterfall and the bridge, the water was sparkling with reflections of the trees and a sky above that was bright blue despite the clouds. 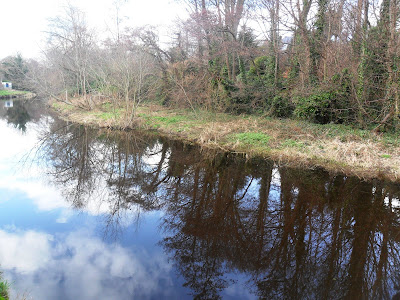 This bridge was once known as the Big Bridge, and carried not just the main road from Dublin to Rathfarnham, but – according to local legend – was a crossing for the Slí Chualainn, the ancient highway used by travelers even in the days of Saint Patrick to Wicklow and Wexford. However, the first record of a bridge built here was in 1381. In 1652 it was described by Gerard Boate in A Natural History of Ireland as a wooden bridge, and “though it be high and strong, nevertheless hath several times been quite broke and carried away through the violence of sudden floods.”

After three bridges had been demolished by the rushing river waters, between 1728 and 1765, the present bridge of one stone arch was built in 1765. The bridge was widened on the west side and renamed in 1952 – the year I was born just a few paces away. 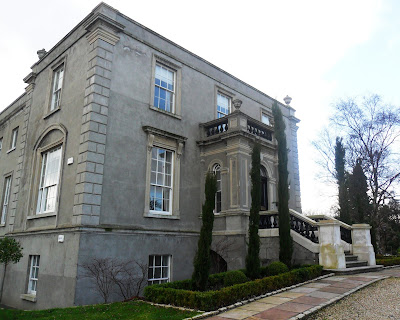 Brookvale has been rescued and restored to much of its former splendour (Photograph: Patrick Comerford, 2011)

I headed south towards Rathfarnham Village, but stooped at Brookvale, to photograph the 18th century house formerly known as Ashfield. This house was crumbling only a few years ago, but has recently been restored to its former grandeur. This was once the glebe house for the Church of Ireland clergy of Rathfarnham Parish. In the early 19th century, it became the home of Sir William Cusack-Smith (1766-1836), Baron of the Exchequer, who once became entangled in a legal quarrel with Daniel O’Connell. Later the Tottenham family lived in the house from 1841 to 1913. When the Brooks family of Brooks Thomas Ltd lived there, they changed the name of the house from Ashfield to Brookvale, and this turn has given its name to the surrounding housing estate..

In Rathfarnham Village, the gates were locked at the old graveyard that lies around the ruins of the Church of Saint Peter and Saint Paul, the former parish church that was finally replaced by the Church of Ireland parish church, built in 1795. I must return again, for this is the burial place of many old families in the area, including the Shaws of Bushy Park and the Cusack-Smith family of Ashfield.

Signs of the times in Rathfarnham Village (Photograph: Patrick Comerford, 2011)

So many apartments built close to Rathfarnham Castle are to let or for sale that in some parts of Rathfarnham it appears that there may be more estate agents’ signs than election posters – a sorry reminder of the links between the boom-and-bust cycle in the property market that has helped create our present economic crisis. Politicians could do well to remind themselves of how this present mess has been created.

After buying the Sunday papers in Centra (formerly Byrne’s), I walked on down Butterfield Avenue, known in the past as Butterfield Lane, and once the venue for the Fairs of Rathfarnham, which were held three times a year – on 15 May, 10 July, and 7 October.

Old Orchard House ... one of the oldest houses in Rathfarnham (Photograph: Patrick Comerford, 2011) 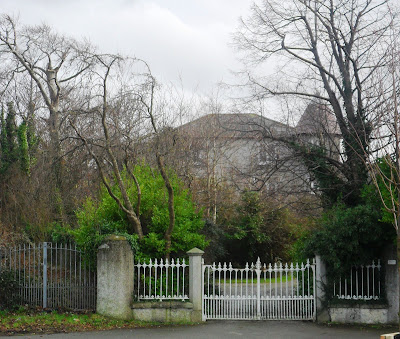 I walked on past Rathfarnham Shopping Centre to the end of Butterfield Avenue, on along Firhouse Road to the bridge over the M50, and up Ballycullen Road, past Knocklyon Castle, the tower of which I can see from my own house.

I was home in time for the match. I may not have had my walk by a beach this weekend, and I certainly miss the sea air at Portrane, Donabate, Skerries, Bettystown and Bray; and the match result was disappointing. But this afternoon’s walk was good for my sense of well-being, and made me feel better about these persistent chest symptoms caused by my sarcoidosis.

Well, I’m due to see my consultant on Tuesday morning; I must write about Knocklyon Castle at another time.
Posted by Patrick Comerford at 20:07 2 comments: