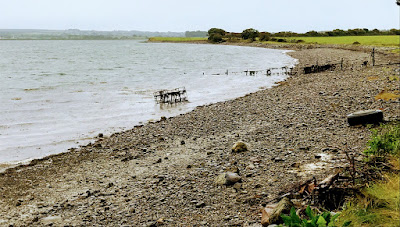 Carrigafoyle Castle: a castle
with a commanding position
on the Shannon estuary 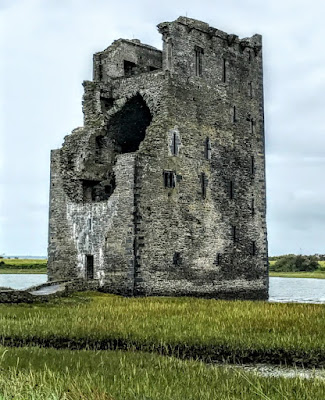 Carrigafoyle Castle stands on a rocky islet in a marsh on the south side of the Shannon Estuary (Photograph: Patrick Comerford, 2017)

On the way back from Ballybunion to Askeaton at the weekend, two of us stopped near Ballylongford on the Shannon Estuary to visit Carrigafoyle Castle, Co Kerry.

Ballylongford, between Ballybunion and Tarbert, is the birthplace of the poet Brendan Kennelly, the World War I general Lord Kitchener, the 1916 leader ‘The O’Rahilly,’ and Detective Garda Gerry McCabe who was murdered by the IRA in Adare in 1996.

Carrigafoyle Castle is 3 km north of Ballylongford, between the high-water and low-water marks on the shore of the Shannon Estuary, set on a small rocky islet in the marsh. its name comes from the Irish, Carraig an Phoill, ‘Rock of the Hole.’

Although the castle was wrecked in a series of bloody sieges, it remains a remarkable castle with its large tower built by the O’Connors of Kerry between 1490 and 1500. In size and grandeur, it compares with Blarney Castle, and was once one of the strongest fortresses in Ireland. It rises to 26.4 meters (86.6 ft) and immediately conveys strength.

Across the broad estuary of the Shannon are Carrig Island and Scattery Island, which provided shelter for the island and enhanced its strategic location.

We stepped across to the castle from the road along across a raised path of stones that are often submerged at high tide. Although there are no facilities, visitors can engage with the mediaeval experience, climb the circular stone staircase to the top and take in. 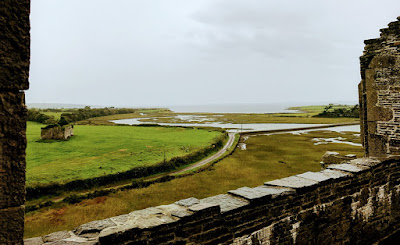 The sweeping, majestic panorama from the turrets and battlements Carrigafoyle Castle on the Shannon Estuary (Photograph: Patrick Comerford, 2017)

Carrigafoyle Castle was built by Connor Liath O’Connor of Kerry at the end of the 15th century on what was originally an island, using a design borrowed from the Anglo-Normans.

Carrigafoyle Castle is five storeys high. There is an unusually-wide, spiral staircase of 104 steps in one corner of the tower, leading to the battlements, and small rooms and the main living spaces opening off the stairs, including vaults over the second and fourth storeys.

Within the bay, the castle-rock was defended on the west and south sides by a double defensive wall; the inner wall enclosed a bawn, and surrounding this was a moat covered on three sides (the east lay open) by the outer wall, where a smaller tower stood. The precipitous sides of the castle-rock were layered with bricks and mortar. 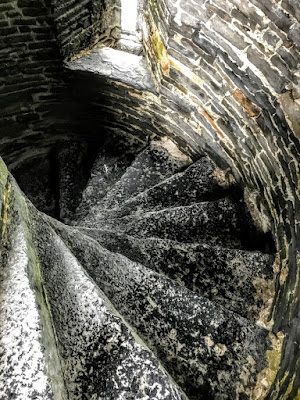 The spiral staircase leads to the top of Carrigafoyle Castle (Photograph: Patrick Comerford, 2017)

The stone bawn wall at the foot of the castle once contained a boat dock where boats could dock and tie up safely at high tide. This was important in the 1500s while the O’Connors of Kerry continued to ‘inspect’ ships passing to and from the port of Limerick – others would have called it piracy.

Carrigafoyle Castle was the main stronghold of the O’Connor Kerry family, who for 400 years were the key family in north Kerry. From here, they intercepted ships making their way up the Shannon to Limerick, 32 km upriver, boarded them and took a part of their cargoes. This practice continued into the mid-16th century.

The Siege of Carrigafoyle Castle during the Desmond Wars in 1580 was part of the crown campaign against the forces of Gerald Fitzgerald, 15th Earl of Desmond, during the Second Desmond Rebellion.

During the rebellion, the castle was held by 50 Irish, along with 16 Spanish soldiers who had landed at Smerwick harbour the previous year in the 1579 Papal invasion; women and children were also present. Months earlier, an Italian engineer, Captain Julian, had set about strenthening the castle’s defences under the direction of the Countess of Desmond. By the time of the siege, she had retreated Castleisland while Captain Julian remained at the castle. 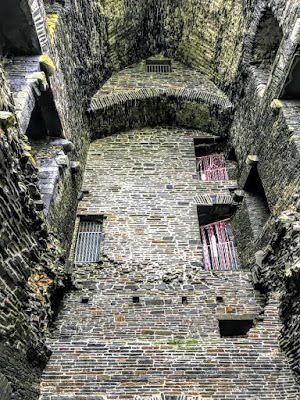 Inside the ruins of Carrigafoyle Castle (Photograph: Patrick Comerford, 2017)

The bombardment of the castle was carried out over two days, six hours each day. On Palm Sunday, Pelham ordered a party of troops to cross to the sea-wall, where they were pinned down by gunfire and had boulders hurled at them from the battlements. The Earl of Ormond described seeing the sea-channel fill with wreckage as the sides of the castle-rock became slippery with blood.

The final assault was led by Captain Humfrey Mackworth and Captain John Zouche. The tower cracked under the impact of two or three shot, and the great west wall collapsed on its foundations, crushing many people inside the castle. The survivors fled through the shallow waters, but most were shot or put to the sword. The rest, including one woman, were brought back to camp and hanged from trees. Captain Julian was hanged three days later. All the castle occupants, including 19 Spanish and 50 Irish, were massacred.

The strategic significance of the siege is shown in the swift way in which other Desmond strongholds fell once news of the destruction had spread. The castle at Askeaton was abandoned, and the garrisons at Newcastle West, Balliloghan, Rathkeale and Ballyduff fled soon after.
.
In 1583, the Earl of Desmond was killed at Glenageenty in the Slieve Mish mountains near Tralee.

Brendan Kennelly’s poem ‘Small Light’ was inspired by the story of the servant girl who is said to have betrayed Carrigafoyle Castle during the siege.

The castle was later recovered by John na Cathach (John of the Battles) O’Connor Kerry. In 1600, this John na Cathach surrendered the Castle of Carrigafoyle and his estates into the hands of the Earl of Thomond, President of Munster, and obtained a regrant of them from Queen Elizabeth. When he died in 1640 he had five daughters but no sons and his titles and estates passed to his kinsman, Donal Maol O’Connor.

Carrigafoyle Castle was known as ‘the impregnable castle’ because of its long resistance to Cromwell’s attacks. It was one of the last castles in Ireland taken by the Cromwellians, and the 12 people found in it were hanged. By 1659, Carrigafoyle Castle had a garrison of 40 to protect the south shore of the Shannon. But the castle was so damaged it was never properly repaired. Despite its wrecked condition, it was occupied in the early 20th century by a Dr Fitzmaurice and his family.

Opposite the castle is the ruined mediaeval Church of Carrigafoyle, built in the same style.

Carrigafoyle Castle is now a listed National Monument, and is managed by the Office of Public Works. In recent years, the castle has hosted the O’Connor Kerry Clan gatherings. Although it remains in its ruined state, it has been restored in parts and is open to the public from June to September from 10 a.m. to 6 p.m. 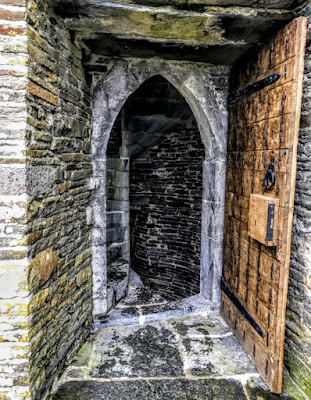 Climbing to the top in Carrigafoyle Castle (Photograph: Patrick Comerford, 2017)