Food for foxes and dinner on
a sunny, summer evening 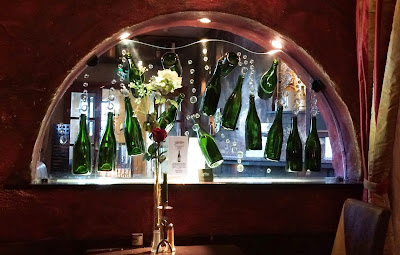 A cosy quiet alcove in Greens at the Leopardstown Inn (Photograph: Patrick Comerford, 2014)

I am in Penkridge in mid-Staffordshire tomorrow to research a paper on the anomalous mediaeval arrangement in the parish that made the parish church of Saint Michael and All Angels a collegiate and Royal Free Church, with the Archbishops of Dublin as Deans of the collegiate church.

Penkridge is half-way between Wolverhampton and Stafford, on the edges of the old forest of Cannonck Chase, and about 14-15 kim west of Lichfield.

As Deans of Penkridge, the Archbishops of Dublin appointed priests to the church as prebendaries, drawing stipends from local manors. This arrangement continued for centuries, with the Archbishops also exercising their rights as Lords of the Deanery Manor of Penkridge and excluding the Bishops of Lichfield from the church and parish, denying them the right of episcopal visitations.

The arrangements continued long after the Reformation, for Penkridge was not a monastic foundation and the deanery and college of canons were not abolished with the dissolution of the monasteries at the Reformation.

The archbishops continued to claim their rights in Penkridge until at least the 1660s, and perhaps later.

I plan to photograph the church and some church-related buildings in Penkridge, and some of the old timber-framed buildings too.

However, one of the old pubs that has disappeared from Penkridge with the passage of time and so is not on my list tomorrow was one known as the ‘George and Fox.’ I wonder whether the proprietor who chose this name was having a quiet joke at the expense of local, non-drinking Quakers and the founder of the Society of Friends, George Fox, who once cried out in the Market Square in Lichfield: “Woe unto the Bloody City of Lichfield.”

A fox scurrying around the grounds of the institute this afternoon (Photograph: Patrick Comerford, 2014)

Historical wit apart, I noticed this afternoon that the real foxes who have become a regular feature on the lawns at the front of the Church of Ireland Theological Institute are beginning to look very thin indeed.

I spotted one this afternoon who looked very thin and lonesome as he scurried around the gate lodge. Perhaps the combination of the end of semester and the closure of Mount Carmel Hospital nearby has made their search for food scraps more difficult.

Today began as a very sunny morning, with clear blue skies and few clouds as I made my way along the banks of the River Dodder in Rathfarnham on my way to work this morning.

The sunshine continued throughout the day, and it was still in the high teens when two of us went to dinner this evening in Greens at the Leopardstown Inn.

This was my first time Greens, with its cosy, rustic surroundings and hidden alcoves. For starters we had beetroot and squash salad, with honey infused mascarpone, with toasted sesame tuille, and pumpkin and walnut risotto with aubergine crisp. Our main courses were salmon and tiger prawn, served with truffle scented mash potato, caramelised swede, salsify and beetroot, baby caper and balsamic dressing, and feta cheese and spinach filo cigars, served with baba ghanoush.

We were restrained as we shared a half bottle of wine, and finished with two double espressos. The sun was still shining when we left later this evening.

The weather promises to be bright and sunny in Pemkridge and Lichfield again tomorrow. Perhaps I’ll get a few walks in the countryside, and hopefully it will be possible to have dinner out in the open at the Hedgehog in the evening. 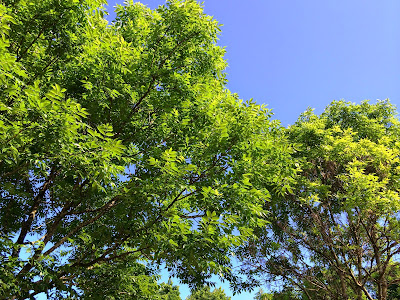 Sunshine by the banks of the River Dodder in Rathfarnham this morning (Photograph: Patrick Comerford, 2014)