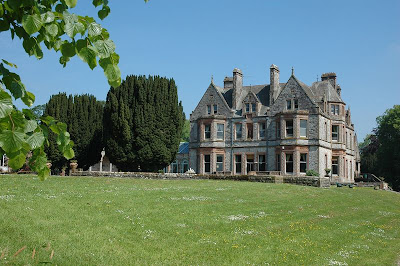 I’m staying for two nights at Castle Leslie in Co Monaghan. I checked in earlier this afternoon, before going on to Shankill Parish Church, Lurgan, for the ordination of four new deacons (the Revd Caroline Mansley, the Revd Emma Rutherford , the Revd Matthew Milliken and the Revd Colin McConaghie) for the Diocese of Dromore, and then returned to Castle Leslie, in the village of Glaslough.

Castle Leslie is a country house hotel exuding old-world grandeur and hospitality, and grandeur and is free from distractions and intrusions. The 1,000-acre Castle Leslie Estate includes the charming and eccentric Castle Leslie with its own equestrian centre and hunting lodge set in unspoiled countryside, with ancient forests, rolling hills, green fields, lakes and streams – and I’m told it also has one of the best pike fishing lakes in Ireland.

Once you enter the grounds of the estate, there is an immediate sense of freedom and privacy. Castle Leslie tries to envelop its visitors in an aura of times past, with no telephones, televisions or radios, there is no Wi-Fi or mini-bars in the bedrooms, and there is no pressure to do anything except relax.

There are several elegant rooms with the promise of seclusion and privacy, the promise of mouth-watering food, friendly service, boating on the lake, breakfast until noon, picnic lunches, and dinner by candlelight in the dining room or gallery, with the romantic alternative of dining privately in the hand-painted Blue Room. There is a private cinema, a full-size snooker table, a magnificent drawing room with a grand piano and a De La Robbia fireplace, 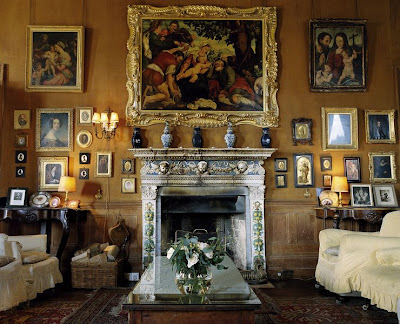 The Drawing Room in Castle Leslie

Castle Leslie stands on the site of an earlier castle, and was designed in 1870 by Charles Lanyon and WH Lynn for Sir John Leslie in the Scottish baronial style.

At the time, the house presented a rather dour and austere facade. But the garden front has an Italianate renaissance cloister that links the main house to a single-storey wing where you find the library and the billiard room. And, in contrast to Lynn’s exterior, the interior shows the hands of Lanyon and Leslie himself, with a strong Italian renaissance feeling.

Since Sammy Leslie took over at Castle Leslie, she has worked hard to realise her ambition to bring the estate back to life. But she also wanted to have fun – restoring Castle Leslie with style and elegance. She started small by opening tea rooms in the old conservatory to give her the income to restore the roof. From 1995 to 1997, she refurbished 14 of the castle bedrooms and bathrooms, each in its own unique style.

With the Good Friday Agreement in Northern Ireland, the Leslie family went on to restore the rest of the estate to its former glory.

In June 2002, Castle Leslie attracted international attention when Glaslough hosted the wedding of Paul McCartney and Heather Mills. It is said over 800 million people watched the wedding on television worldwide.

In 2004, after 20 years in external ownership, the estate’s equestrian centre and hunting lodge were bought back by the Leslie family.

Meanwhile, the Long Gallery Wing in the castle was redeveloped, allowing Castle Leslie to offer business and corporate facilities. Six further guestrooms brought the room total to 20, and the old Victorian kitchens were turned into a cookery school, adding another dimension to the estate.

With 78,000 sq ft of historic buildings, miles of famine wall and the hunting lodge back in the family fold, further funding was found. Inspired by Poundbury, the town built by Prince Charles, Sammy Leslie brought in conservation and heritage specialists to restore the village of Glaslough, building village cottages and houses around a village square and green.

In January 2006, work started on a €10million refurbishment, including the 35-bedroom lodge and the new state-of-the-art equestrian centre. The project was supported by grants from the Irish Government and the EU under the National Development Plan, and the refurbished and renovated hunting lodge and the equestrian centre at the castle gates reopened in May 2007.

All this work has allowed Sammy to go back again to her original dream – great horses, good food and old-style hospitality. But she has already identified a number of future projects including the restoration of the Walled Garden and the Gate Lodge.

Meanwhile, I’m off to dinner.


Posted by Patrick Comerford at 20:30 No comments: