A day in Skerries Sailing Club 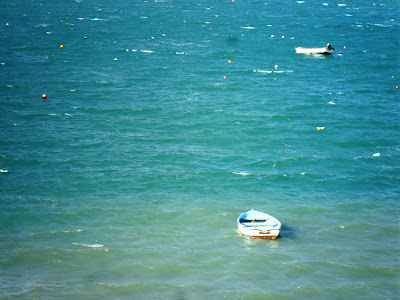 We spent the day in Skerries, where we had our Ash Wednesday retreat. A sailing club may seem an unusual choice of venue, but Skerries Sailing Club proved to a very appropriate location, and we received a very warm welcome from the manager, Donal Lynam.

The club is located on the narrow isthmus that links Skerries with the harbour and Red Island. No-one no one else was using the club during the day, and we had the most glorious views across the South Strand on one side and the Harbour and the North Strand on the other.

The sea was blustery at times, but the sun kept shining all day, and there was a cheery spring feeling to the whole day. There was generous time and space for beach walks, around the harbour and Red Island – and to drop into the Olive for a cup of coffee 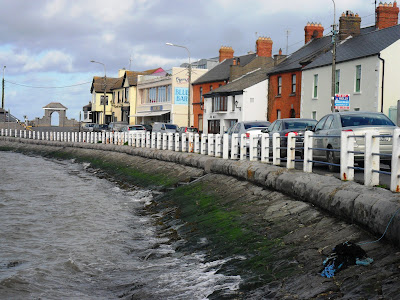 Skerries Sailing Club is a vibrant sailing and boating club set in the scenic island-studded waters off the coast of Fingal (north County Dublin). The first recorded regatta in Skerries took place in 1857 but it was another 76 years before a club was formally founded at a meeting in the local library.

The surnames of the first committee members read like a roll call of famous Skerries sailing names: McDermot, Varian, Derham, Shiels, May, O’Reilly, McNally, Cochrane, Grimes, Clarke and Dardis. Many of those names are still represented through their children and grandchildren who have taken up the call of sail and carry on a great local tradition.

The first fleet consisted of six boats, and the first club flag was proudly hoisted on 13 June 1934 on the flagpole at the old lifeboat house, which was rented as a clubhouse for £20 a year. There was no bar and after meetings the members retired to local harbour hostelries for refreshments.

In 1944, despite World War II, the club bought its first permanent home, Stella Maris, later the Bayview Restaurant, for £750. The club moved in 1948 when Inish Rue and Bay View were bought by the club and Stella Maris was sold for £2500.

In the 1960s, the club was divided over a decision to add a goat’s head to the burgee. The choice was inspired by a local legend about Saint Patrick’s goat, allegedly killed and eaten by locals.

In 1972 Bord Failte made a loan towards the £34,500 cost of building a new clubhouse. It was an investment that paid yields today and we are all indebted to Donal Lynam, for his hospitality, and to Helen McGlinchey for leading our reflections.

At the end of the afternoon, we walked the length of the South Strand to Holmpatrick for our concluding Eucharist. Canon Cecil Hyland, who is looking after the parish during the present vacancy, was there to welcome us and to introduce us to Holmpatrick.

The rain held off until the end of the day, as we headed back home through Loughshinny and Rush.
Posted by Patrick Comerford at 22:11 No comments:

As a community, we are spending Ash Wednesday on a retreat in Skerries. This charming, small fishing harbour in Fingal (north Co Dublin), with its lengthy stretches of beach and the cliffs at Red Island, has generous, expansive views across the Skerries Rocks, out onto the Irish Sea and up to the Mountains of Mourne.

It has long been a favourite location of mine for beach walks and for quiet cups of coffee, and so it was a natural choice as a location for today’s retreat.

We are meeting in Skerries Sailing Club, which overlooks both the harbour and the South Strand. There we have time for prayer, reflection, silence and walks.

Later in the afternoon, we plan to walk the length of the South Strand from Skerries Sailing Club to Holmpatrick to close the day with a quiet celebration of the Eucharist at 4 p.m. in Holmpatrick Parish Church.

The bidding at this morning’s opening service says:

Brothers and sisters in Christ: since early days Christians have observed with great devotion the time of our Lord’s passion and resurrection. It became the custom of the Church to prepare for this by a season of penitence and fasting.

At first this season of Lent was observed by those who were preparing for Baptism at Easter and by those who were to be restored to the Church’s fellowship from which they had been separated through sin. In course of time the Church came to recognise that, by a careful keeping of these days, all Christians might take to heart the call to repentance and the assurance of forgiveness proclaimed in the Gospel, and so grow in faith and in devotion to our Lord.

I invite you, therefore, to observe a holy Lent, by self-examination and repentance; by prayer, fasting, and self-denial; and by reading and meditating on God’s holy word.

Almighty and everlasting God,
you hate nothing that you have made
and forgive the sins of all those who are penitent:
Create and make in us new and contrite hearts,
that we, worthily lamenting our sins
and acknowledging our wretchedness,
may receive from you, the God of all mercy,
perfect remission and forgiveness;
through Jesus Christ our Lord. Amen.