An afternoon walking through
the ‘white village’ of Mijas 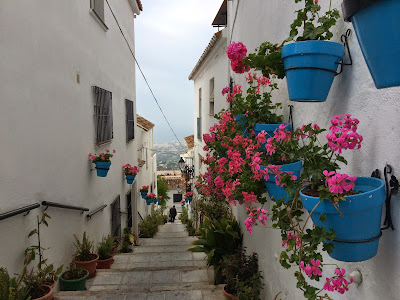 The white-washed narrow streets of Mijas, with their geranium-filled hanging baskets, seem to be a world apart from the resorts on the Costa del Sol below (Photograph: Patrick Comerford, 2014)

Mijas is a white-washed, mountainside village, 30 km south-west of Málaga and about 450 metres (about 1,500 feet) above sea level. The village is like a balcony looking out across the countryside of Andalusia and down onto Fuengirola below and the coastal resorts of the Costa del Sol.

Two of us caught a bus from Torremolinos to Fiengirola late one morning, and from there took a second bus up to Mijas, a small town packed each day with day-trippers taking an Easter break from the brash resorts. 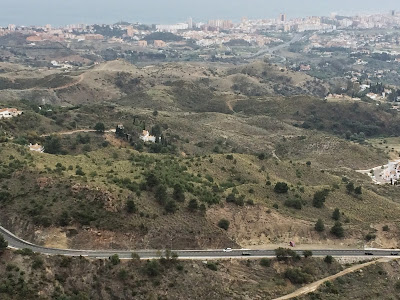 Mihas is like a balcony above the surrounding countryside and the resorts of the Costa del Sol (Photograph: Patrick Comerford, 2014)

Mijas relies on the tourist industry, and the town is filled with cafés, restaurants, museums and souvenir shops.

The Hermitage of San Sebastián has a tiny chapel that dates from the late 17th century, when it was built with alms. This is a typical Mudejar church, built in a Spanish architectural style dating from the 13th to the 16th century, and combining Moorish and Gothic styles. Inside, a peaceful atmosphere is created by that plain white walls that provide a sharp contrast with the ornate altar and cupola above it, decorated with rococo plaster. 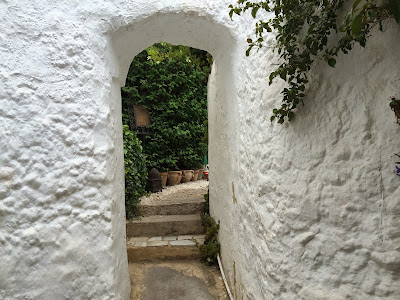 An invitation to enter the Secret Garden at the Aroma Café (Photograph: Patrick Comerford, 2014)

Mijas has managed to retain much of its “white village” charm, with its cobbled, narrow winding streets, dazzling whitewashed walls, charming plazas and squares, and breathtaking views.

The street where it stands, Calle San Sebastián, is one of the most beautiful and picturesque along the Costa del Sol.

There we had lunch in the Aroma Café and Secret Garden before continuing to explore the side streets with their white-washed houses, decorated with geranium-filled pots and hanging baskets.

The first settlers in Mijas in prehistoric times were the Tartessians. The remains of the original fortifications can still be seen in parts of the wall. The area’s mineral wealth of the area attracted the Greeks and the Phoenicians to the village, and Mijas was described by Ptolemy in his Geography in the 2nd century AD.

The Romans knew Mijas as Tamisa. They were followed by the Visigoths and then by the Moors, who were ruling this part of southern Spain by the year 714. The Muslim rulers allowed the people here to hold onto their property, their religion, and their customs – but at a price: a third of their goods, agricultural produce and livestock. The Moors pronounced the name Tamisa as Mixa, and this in turn became Mijas. 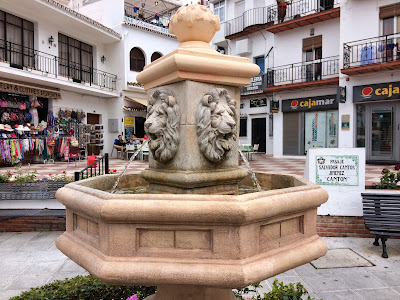 Lions on a fountain in a square in Mijas (Photograph: Patrick Comerford, 2014)

During the time of the Emirate of Córdoba, the village was conquered by Umar ibn Hafsun. The village remained under the rule of Bobastro, who was defeated by Abd al-Rahman III in the late 9th century.

In 1487, Mijas resisted the advance the Catholic monarchs Ferdinand and Isabella during the siege of Málaga. But when Málaga fell, the inhabitants surrendered, most of the people were sold as slaves, and the town was repopulated by Christians.

A few decades later, during the Revolt of the Comuneros, Mijas remained loyal to the Spanish monarchs, who gave it the title of Muy Leal (“Very Loyal”). Soon after, Joanna of Castile gave the place the title and status of a royal borough villa (town) and exempted the place from paying royal taxes.

But none of this saved Mijas from the marauding adventures of pirates, who continued to work along the coast below until the early 19th century.

The people of Mijas continued to survive mainly through farming, fishing, and their vineyards. But the pirates threatened the safety of the fishermen, and in the mid-19th century the Philloxera plague destroyed all the local vineyards.

The local peace was also disturbed in 1831, when General Torrijos landed on a beach below at El Charcón. With a small force of 52 men, he crossed Mijas, climbed the hill the hill above and took a stand against the absolutism of Ferdinand VII. The revolt eventually collapsed, and the general and his tiny force were shot on the San Andres beaches on 11 December 1831.

The village remained isolated well into the 20th century, and there was no ’phone service even into the 1950s, when the first small hotel was built.

Today, the attractions for day-trippers to Mijas Pueblo include the town’s traditional bullring, which opened in 1900, and donkey trips that offer children – and some adults – tours around the area. Although the viewing platforms around the rim of Mijas offer spectacular views of the African coastline, the Atlas Mountains, Gibraltar and a good part of the Costa del Sol, cloud cover worked against taking in these sights during my afternoon visit. 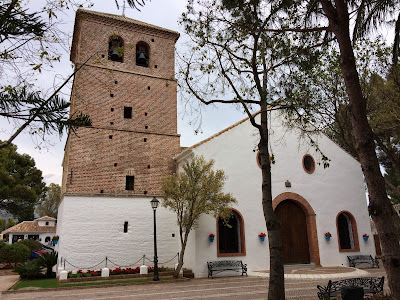 Near the bullring, I visited the Iglesia de la Immaculada Concepcion, a church that dates mainly from the early 18th century church but standing on part of the ruins of a Moorish castle that stood here from the 8th until the late 15th century. The original church was built on the site of a mosque in the 1500s, and there are still traces of the Mudejar tower of the old mosque. 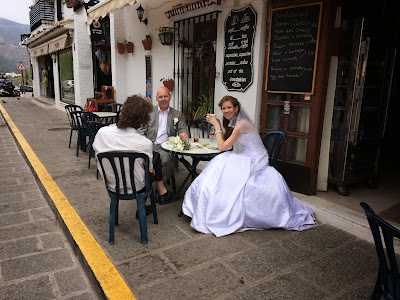 A wedding party of three in Mijas (Photograph: Patrick Comerford, 2014)

Later as we sipped coffee in a café in a small square, children passed by on “donkey taxis,” and a newly-wed bride in her white costume sat at the table next to us with her husband and their photographer … a wedding party of three.

On the way back to Mijas to Torremolinos, we caught a bus that by-passed Fuengirola, but that took us through Benalmádena, and by the the largest Buddhist stupa in the West, standing tall at 33 metres, with a Tibetan meditation hall beside it.

Some historians say the name of the town comes from the Arabic Ibn al-ma’ din or “son of the mines” for the iron and ochre bed found in the area. Others say it comes from the Arabic word Bina al-ma’din, “the construction or building of the mine.” And others still suggest derivation from Arabic phrases meaning “people between springs” (Bena-A La Ena) or Bina al-Madina, “the state of al-Madina’s family,” referring to a rich Muslim family in Málaga who owned the area.

However, as the bus made its way through the brash areas of the resort, the most prominent names that afternoon appeared to be those on Irish pubs, including ‘The Irish Times’ (I kid you not), ‘Kitty O’Sheas’ and ‘O’Driscolls.’ Who is going to explain this invasion and untangle the etymology of these names for future generations?

A sign of the Times? One of the many Irish pubs in Benalmádena (Photograph: Patrick Comerford, 2014)