A Victorian seafront terrace with a Joycean legacy

Martello Terrace ... a Victorian row of eight houses at the north end of the beach in Bray, Co Wicklow (Photograph: Patrick Comerford, 2011)

It has been a busy week, and it promises to be a busy, working weekend. But I managed to take a few hours out this afternoon, and had lunch in the Beach House in Bray.

Once again, two of us managed to get a table at one of the full-length windows looking out on to the beach, and south towards Bray Head. 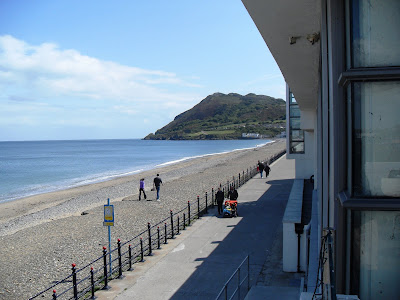 Bray Head and the beach seen from the terrace at the Beach House in the afternoon sunshine today (Photograph: Patrick Comerford, 2011)

After lunch, it was still bright and sunny and the afternoon sunshine was warm and inviting. Instead of walking south along the promenade towards Bray Head, we walked north along the stony beach towards the harbour. There were small scattered groups of Spanish and Italian students on the beach, gently charmed by the small waves of the tide. The waves rolled in gently, and as they went back out again, there was a gentle, slushing, breathing sound from the pebbles.

One lone swimmer had braved the waters as his dog waited patiently at the northern end of the beach. As we reached them, I wondered whether the water was cold. “Not as cold as it was in November and December,” he smiled. 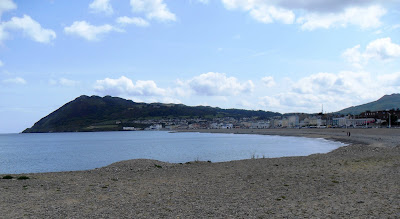 The beach at Bray and Bray Head seen from the north end of the beach this afternoon (Photograph: Patrick Comerford, 2011)

We stopped to admire Martello Terrace, which is part of Bray’s Victorian architectural heritage. This terrace is a largely uniform row of eight, three-storey houses built in 1860, seven of which are two-bay houses. They form of one of Bray's earliest, best-preserved, and most distinctive seafront terraces. The terrace faces onto Bray’s grass-covered esplanade, but is separated from it by a small private space now used by the residents for car-parking.

At the east end of the terrace, No 1 is also of historical and literary interest because James Joyce lived there from 1887 to 1891. It is now the home of the former Labour TD Liz McManus.

Each house on Martello Terrace has a veranda and first-floor Regency-style balcony spanning the front of the building and continuing across the whole group. The verandas have low rendered walls with simple railings and steps, and slender iron columns with brackets supporting the balconies. The balconies have decorative geometric chinoiserie railings.

The façades are finished in painted lined render, while the hipped roves are covered in artificial slate and overhang supported on paired brackets, and the houses have shared rendered chimneystacks with corbelling.

The entrances to seven of the houses are timber and glazed doors with narrow sidelights and segmental-headed fanlights. The windows are flat-headed and filled with two-over-two timber-sash frames. Glazed doors to the first floors lead onto the balconies.

At the west end of the terrace, the entrance to No 8 is to the west elevation and consists of a timber and glazed door with a small hood supported on decorative brackets, and a segmental-headed fanlight above.

We then walked in behind Martello Terrace to Bray Harbour, where the River Dargle enters the sea. The harbour was filled with sailing boats and small yachts. Bray Sailing Club is more than 100 years old, and many of its members have earned national and international recognition.

We followed around the harbour to look at the colony of mute swans, and wondered about returning to O’Toole’s Harbour Bar, which is proud of its reputation as one of the best pubs in Ireland. The weather was still bright and sunny, but time was pressing on. We had another look at Martello Terrace, and I was back to work later in the afternoon.
Posted by Patrick Comerford at 22:29 No comments: