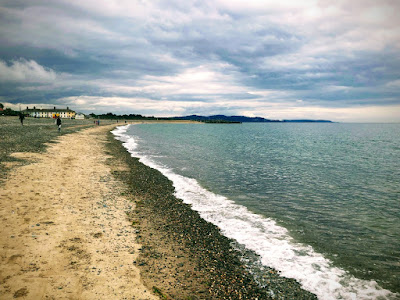 A summer afternoon walk on the beach in Bray (Photograph: Patrick Comerford)

Before a returning to Askeaton from Dublin this week, two of us went for a walk on the beach in Bray, Co Wicklow. This was my first time in Dublin since the lockdown began, and I has a consultation with my GP on my pulmonary sarcoidosis and a much-needed B-12 injection, which began to kick-in as two of us headed out to Bray for a walk on the seashore.

Looking back on my photographs, I realised I had not been in Bray since the end of last year [31 December 2019]. Askeaton is close to the Shannon Estuary and Beagh Castle, with its views across the river-mouth to Shannon Airport, is within the previous ‘lockdown’ limit of 5 km, I have missed being close to the open sea and the sound the waves against the shore, the pebbles and the sand.

Indeed, since the Covid-19 pandemic lockdown was introduced, I have not been able to visit nearby beaches such as Beale Strand or Ballybunion in Co Kerry, even though I would be keeping within my parish boundaries, or cross from Tarbert to Kilrush and Kilkee in Co Clare.

Bray was unexpectedly quiet during our afternoon visit, and unlike my walk earlier this week along the banks of the River Liffey, between Islandbridge and Chapelizod, there were no blue skies or blue waters.

But Bray is still a delight, whether it is mid-winter or mid-summer. 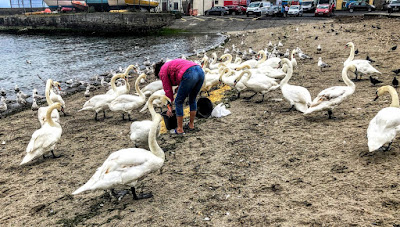 Our first stop was at Bray Swan Sanctuary, while over 20 swans were being fed by a volunteer. It was a magnificent sight, and the volunteer knew each swan by name, aware of their particular needs, age and health. As they fed from her hand, and she talked gently with each one, it gave me a new image for some future sermon on the Good Shepherd.

We then walked around the harbour, which was almost-eerily quiet, and walked almost the full length of the beach, one of the few beaches in the greater Dublin area to retain its blue flag. 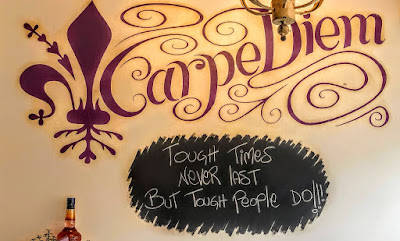 Carpe Diem, my favourite restaurant in Bray, is still not opened fully, but was opening a take-away service. We took panini and two double espressos onto the grassy area at the promenade, and imagined we were having a summer picnic in imaginary sunshine.

I normally find summer sunshine eases the symptoms of sarcoidosis and a long walk is good for my lungs and the pains in my joints, and a walk by the sea lifts my spirits. I am back in the Rectory in Askeaton. But, once again, I have reassured by this week’s walks by the river and the sea that I may have sarcoidosis, but sarcoidosis does not have me. 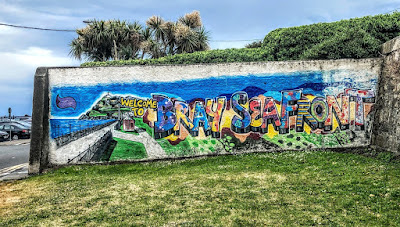 Email ThisBlogThis!Share to TwitterShare to FacebookShare to Pinterest
Labels: B12, Beach Walks, Bray, Eating Out, Living with sarcoidosis 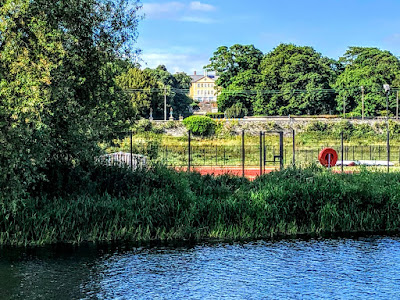