The Downpatrick Declaration:
‘bringing to the world
a message of charity and peace’ 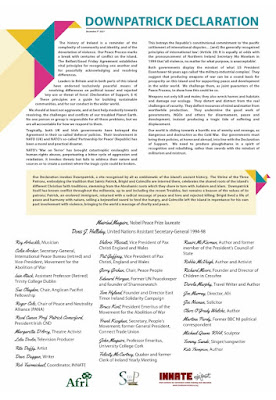 Today is being celebrated as the 1600th anniversary of the birth of Saint Columba or Saint Colmcille, one of the three patron saints of Ireland.

Saint Columba is said to have been born 1,600 years ago, on 7 December 521, at Gartan in present-day Co Donegal. As part of today’s commemorations, the ‘Downpatrick Declaration’ was launched this evening (7 December 2021), in Downpatrick, Co Down. As President of the Irish Campaign for Nuclear Disarmament (Irish CND), I am one of the 33 signatories of today’s declaration.

The history of Ireland is a reminder of the complexity of community and identity, and of the devastation of violence. Our Peace Process marks a break with centuries of conflict on the island. The Belfast/Good Friday Agreement establishes vital principles for recognising one another and for peacefully acknowledging and resolving differences.

Leaders in Britain and in both parts of this island have endorsed exclusively peaceful means of resolving differences on political issues and rejected ‘any use or threat of force’. (Declaration of Support, § 4) These principles are a guide for building sustainable communities, and for our conduct in the wider world.

We should at least not aggravate, and at best help modestly towards, resolving the challenges and conflicts of our troubled Planet Earth. No one person or group is responsible for all these problems, but we are all accountable for how we respond to them.

Tragically, both UK and Irish governments have betrayed the Agreement in their so-called ‘defence’ policies. Their involvement in NATO (UK) and NATO’s so-called ‘Partnership for Peace’ (Republic) has been a moral and practical disaster.

NATO’s ‘War on Terror’ has brought catastrophic onslaughts and human-rights abuses, perpetuating a bitter cycle of aggression and retaliation. It invokes threats but fails to address their nature and sources or to create a context where the tragic cycle could be broken.

This betrays the Republic’s constitutional commitment to ‘the pacific settlement of international disputes ... [and] the generally recognised principles of international law’ (Article 29) It is equally at odds with the pronouncement of Northern Ireland Secretary Mo Mowlam in 1999 that ‘all violence, no matter for what purpose, is unacceptable.’

Both governments display the mindset of what US President Eisenhower 60 years ago called 'the military-industrial complex.’ They suggest that producing weapons of war can be a sound basis for prosperity on this island and for supporting peace and development in the wider world. We challenge them, as joint guarantors of the Peace Process, to show how this could be so.

Weapons not only kill and maim; they also wreck homes and habitats and damage our ecology. They distort and distract from the real challenges of security. They deflect resources of mind and matter from worthwhile production. They undermine the good work of governments, NGOs and others for disarmament, peace and development, instead producing a tragic tide of suffering and displacement.

Our world is sliding towards a horrific era of enmity and revenge, as dangerous and destructive as the Cold War. Our governments must bring their policies, at home and abroad, into line with the Declaration of Support. We need to produce ploughshares in a spirit of recognition and rebuilding, rather than swords with the mindset of militarism and mistrust.

Our Declaration invokes Downpatrick, a site recognised by all as emblematic of the island’s ancient history. The Shrine of the Three Patrons, embodying the tradition that Saints Patrick, Brigid and Colmcille are interred there, celebrates the shared roots of the island's different Christian faith traditions, stemming from the Abrahamic roots which they share in turn with Judaism and Islam. Downpatrick itself has known conflict throughout the millennia, up to and including the recent Troubles, but remains a beacon of the values of its patrons: Patrick, an enslaved immigrant, returned with a radical message of peace and love and rejected killing; Brigid lived a life of peace and harmony with nature, selling a bejewelled sword to feed the hungry; and Colmcille left the island in repentance for his own past involvement with violence, bringing to the world a message of charity and peace.

Bruce Kent,
President Emeritus of the Movement for the Abolition of War

Ruairi McKiernan,
Author and former member of the President’s Council of State

Richard Moore,
Founder and Director of Children in Crossfire 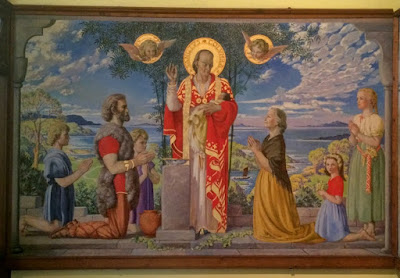 Saint Columba baptisting a child … a fresco in the Baptistery in All Saints’ Church, Blackrock, Co Dublin (Photograph: Patrick Comerford)

At first this looked like being a busy and stormy day. A planned community project meeting in Rathkeale this morning was postponed last night because of Storm Barra. However, the launch of the ‘Downpatrick Declaration’ is expected to go ahead later this evening.

Before th storm lands in Co Limerick and before the day begins, I am taking some time early this morning (7 December 2021) for prayer, reflection and reading. 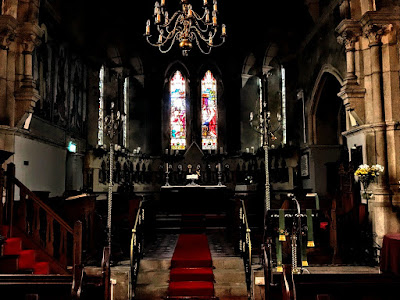 Although today is not Columba’s Day, I have chosen Saint Columba this morning because of the launch of the ‘Downpatrick Declaration’ later this evening, as part of the celebrations of the 1,600th anniversary of the birth of Saint Colimba, who is said to be buried at Downpatrick.

Saint Columba, also known Colum or Columcille, is one of the three patrons of Ireland, alongside Saint Patrick and Saint Brigid of Kildare. He is also the patron saint of Derry and is regarded as one of the ‘Twelve Apostles of Ireland’. He was born 1,600 years ago, on 7 December 521, at Gartan in present-day Co Donegal.

He is remembered as the missionary monk who introduced Christianity to Scotland, and who founded the abbey on the island of Iona.

In 560, Columba became involved in a quarrel with Saint Finnian of Moville over a psalter. Columba copied the manuscript at the scriptorium under Finnian, intending to keep the copy. Finnian disputed Columba’s right to keep it, and the conflict that ensued eventually resulted in the Battle of Cúl Dreimhne in present-day Co Sligo in 561, when many men were killed.

A synod was called, and Columba was threatened with excommunication for these deaths. But Saint Brendan of Birr (29 November) spoke on his behalf. Eventually, Saint Columba set sail from the Inishowen Peninsula in Co Donegal for Scotland, where he and his 12 disciples founded a church and monastery on the island of Iona ca 563.

Iona became the springboard for the conversion of Scotland, and is regarded as the mother house of abbots and bishops in the early history of Christianity in Scotland.

Saint Columba returned with Saint Aidan to Ireland in 575, when he took a leading role in the Synod of Druim Cetta and founded the monastery of Drumcliff in Cairbre, now Co Sligo, near the battlefield.

Saint Columba spent most of his years in Iona. He died there in 597 and was buried in his abbey. he created. The Vikings first attacked Iona in 794, and Saint Columba’s relics were finally removed in 849 and divided between Scotland and Ireland. The parts of the relics that went to Ireland are said to be buried in Downpatrick, Co Down, with Saint Patrick and Saint Brigid. 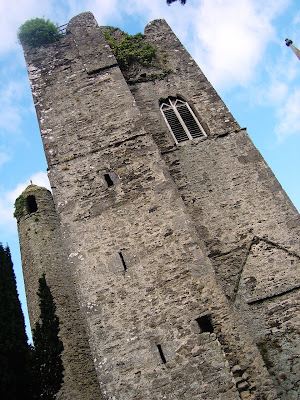 [Jesus said:] 12 ‘What do you think? If a shepherd has a hundred sheep, and one of them has gone astray, does he not leave the ninety-nine on the mountains and go in search of the one that went astray? 13 And if he finds it, truly I tell you, he rejoices over it more than over the ninety-nine that never went astray. 14 So it is not the will of your Father in heaven that one of these little ones should be lost.’

The Prayer in the USPG Prayer Diary today (7 December 2021) invites us to pray:

Let us pray for tea plantation workers across Asia and Africa, who often suffer from poor working conditions and meagre wages. 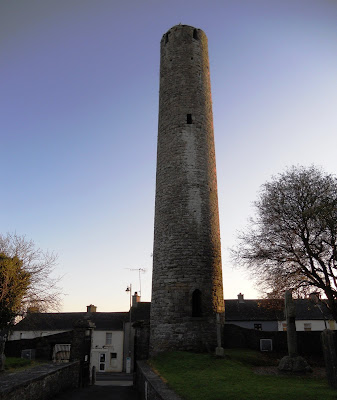