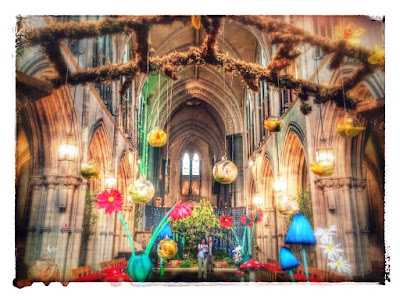 Christ Church Cathedral has been transformed into a wonderland this weekend (Photograph: Patrick Comerford, 2015)

The theme of this year’s festival is all about fairy tales and the cathedral is adorned with floral installations and props that have transformed into an enchanting wonderland. Hundreds of flowers have been used to create a stunning display of contemporary and traditional floral designs, inspired by the award-winning floral artist Christopher White.

Outdoors there is a busy summer market with food, craft and garden stalls in grounds of the cathedral, which provides a unique architectural backdrop.

Visitors are being offered gardening advice by gardening and horticultural experts with talks each day in the Cathedral Music Room. 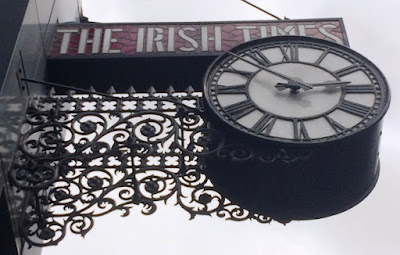 A ‘Sign of the Times’ … the Irish Times clock has been moved to Tara Street (Photograph: Patrick Comerford, 2015)

The old Irish Times clock, that had been moved in the past from Westmoreland Street to D’Olier Street, hangs on the new building as “sign of the times” and a sign of continuity.

There was a warm welcome from old friends and former colleagues, but it was sad occasion, with a meeting on the top floor. In all, 85 people were present the meeting and voted overwhelmingly to wind up or dissolve the Irish Times Credit Union Ltd, which was founded almost half a century ago in 1969.

Regulations have increased the heavy demands on the employees and pensioners who have volunteered their services as board members. Margaret Coffey, in her address from the chair, reminded us: “Unfortunately, credit unions have not been immune to the ongoing financial crisis.”

As one former employee present observed at the meeting, it is a sad day when the regulators mysteriously allow the Irish banks to sink the Irish economy yet squeeze out well-run, not-for-profit community groups like our small credit unions. 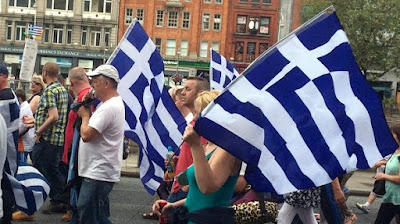 Protesters waving Greek flags on the quays in Dublin this afternoon … a reminder of Shelley’s words: “We are all Greeks” (Photograph: Patrick Comerford, 2015)

As I walked along the quays between Christ Church Cathedral and Tara Street, I could sympathise with the many anti-austerity protesters waving Greek flags.

The poet Percy Bysshe Shelley wrote in Hellas almost 200 years ago in 1821: “We are all Greeks. Our laws, our literature, our religion, our arts have their root in Greece.”

Writing in The Irish Times this morning, the Greek Finance Minister Yannis Varoufakis asks poignantly: “Is it more likely that the euro zone will become a better union to belong to if Greece is thrown to the wolves?”

Looking at today’s crises, Shelley might simply say: “We are all Greeks.” For if we let the international financiers get away with their plotting and scheming against Greece this month, who is going to be their next target next month?

He says the “Eurozone moves in a mysterious way” so that unelected officials make decisions and block the open flow of information to elected politicians who should be the true decision-makers.

It all makes the Wonderland in Christ Church Cathedral an innocent delight.

Posted by Patrick Comerford at 21:10 No comments: 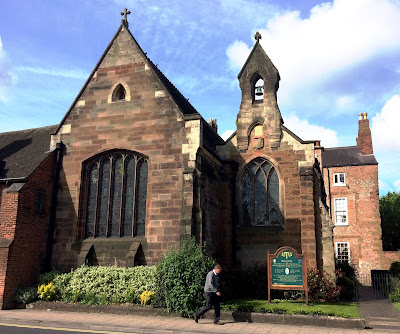 The Chapel of Saint John’s Hospital, Lichfield … preaching on the Feast of the Birth of Saint John Baptist next Wednesday (Photograph: Patrick Comerford, 2015)

The ‘Church of Ireland Notes’ online today on p 19 in ‘The Irish Times’ this morning [20 June 2015] includes the following paparagraph:

Posted by Patrick Comerford at 08:26 No comments: