Join me in Crete again for
a few weeks in Rethymnon 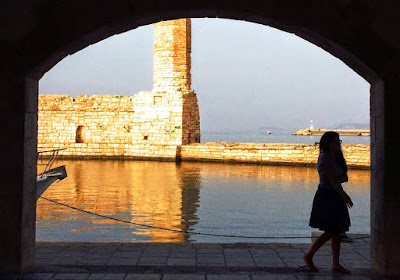 Back in Rethymnon in Crete for another summer break (Photograph: Patrick Comerford)

I am back in Crete for three weeks, and staying near Rethymnon, the Venetian and university town that I have known since the 1980s.

I arrived late last night [29 June 2016] on a Ryanair flight from Dublin to Chania Airport, and it was a 40 km journey to Julia Apartments in the village of Platanes, where I am staying once again for the next few weeks.

I stayed here for a week last September [2015], and I am delighted to be back again in Platanes, which is about 5 or 6 km east of Rethymnon and just 300 metres walking distance from the long sandy beach that stretches in lengths east of Rethymnon.

Two decades ago, Platanes was an unremarkable suburb of Rethymnon on the old road between Rethymnon and Iraklio. But it has grown and developed over the last 20 years, and there is a number of luxury hotels here too, including El Greco and Creta Palace, which were built in the area, along with the usual Greek rent rooms and pensions in the centre of the resort.

A fresco under the bridge on the road between Platanes and Tsesmés (Photograph: Patrick Comerford)

Behind Platanes is the pretty village of Tsesmés, with its quiet tavernas and a pretty village, which I resolved last year to visit when I returned this year. Nearby are other pretty, traditional villages such as Adele, or Maroulas, with its Venetian tower houses and churches, and Arkadi with its historically important monastery is 17 km to the south.

Julia Apartments is family-run complex, run by Vasilis Vogiatzis, his wife Brenda from Scotland, their daughters and his mother. There is a pool, a poolside bar and a restaurant, all set in a blossomed garden, along with a children’s playground. The apartments look out onto the garden or up to the mountains, and the studios have a kitchenette with dining area, fridge, cooking hobs and a flat-screen TV.

Last night, Vasilis was delighted with a rowing T-shirt from Cambridge that I brought with me, and this morning it is hanging proudly in the bar.

I hope over these coming weeks to visit one place in Rethymnon that is trying to make a difference and bring about change in the midst of these crises. In the back streets, away from the gaze of tourists, The Voluntary Welfare Clinic Rethymno (Εθελοντικό Ιατρείο Κοινωνικής Αλληλεγγύης Ρεθύμνου) works from a storefront crèche in Kastrinogiannaki Street, hidden in a dark street where there are no tourist shops, yet only a few steps away from the seafront, the restaurants and the bars.

I visited them twice last September to see some of the work of the clinic. But it is hard-pressed, the workload is heavy, and the numbers needing attention are growing.

During the coming weeks, I also hope to visit one or two monasteries or convents, see some archaeological sites I have not yet visited, go for walks on the beach, and perhaps swim in the warm waters of the Mediterranean. Despite the intermittent rain in Ireland and England this week, the temperatures here are in the low and mid 30s during the day.

There are good Wi-Fi connections here, so join me each day on my time in Crete over the next few weeks. 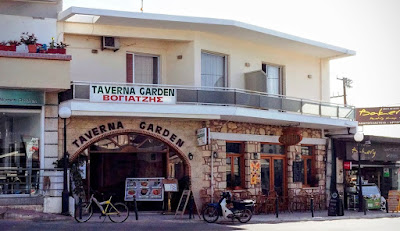