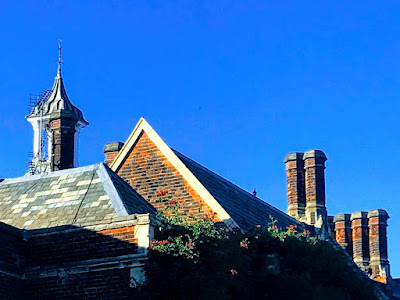 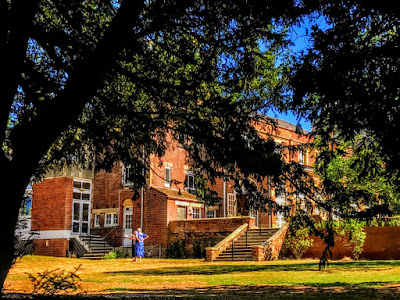 Sidney Sussex College always look beautiful, and especially so in the summer sunshine in Cambridge.

While I was on my way to this week’s USPG conference in High Leigh, I called back in to Sidney Sussex yesterday morning [2 July 2018]. When I arrived after breakfast, the college was closed to the public and was noticeably quiet after the busyness of last week, including graduation day. I wanted to photograph the wisteria, although they reminded me at the porters’ lodge that it is now past its most beautiful phase.

Nearby in Market Passage off Sidney Street, I noticed for the first time the blue plaque to remember Oliver Cromwell’s times in Cambridge, which was unveiled about a year and half ago at the site in Cambridge site where he discussed his local war efforts during the English Civil War.

I missed this plaque when I was back here last year, and obviously its discreet if not tardy location did nothing to attract my attention. I might never have noticed this week except I was making my way from Great Saint Mary’s Church to Sidney Sussex College. 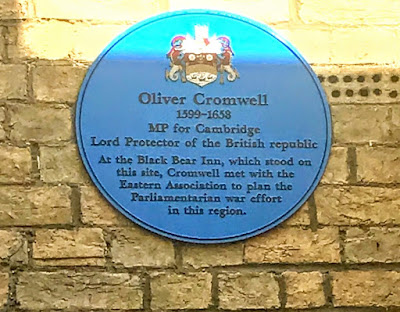 Cromwell was born about 30 km from Cambridge in 1599 and for a year he was a student at Sidney Sussex College. Although he is, perhaps, the best-known undergraduate at Sidney Sussex, he left after a year in 1617 without a degree and returned home following the death of his father.

However, his connections with Cambridge continued throughout his lifetime and beyond. Over the next two decades, Cromwell never lived more than a few miles away, at Huntingdon, St Ives and, from 1636, in Ely.

As the English Civil War unfolded, Cambridgeshire and neighbouring counties formed an ‘Eastern Counties’ Association’ at the end of 1642 to organise their own regional army and to oversee the local war effort, with Cambridge as the administrative base.

The Black Bear Inn once stood in what is now Market Passage, close to Sidney Sussex College. The inn provided committee rooms for meetings of the Grand Committee of the Eastern Counties’ Association in 1643 and for the Earl of Manchester’s Commissioners in 1644. Cromwell was appointed a colonel with the command of a cavalry regiment in the army of the Eastern Association.

Following the Restoration, Cromwell’s body was dug up in 1661 and he was executed posthumously. Now that the tables had been turned, the committee which purged the Corporation of Cambridge in 1662 probably met in the Black Bear Inn, opposite Trinity Church, whose yard survives today as Market Passage.

But Cromwell’s connections with the Black Bear continued to be remembered in the years after the Civil War. In 1662, the diarist Samuel Pepys stayed at the Inn during a visit to Cambridge, and he was shown the room where ‘Cromwell and his associated officers’ met during the war.

The Black Bear Inn was part of the estate of Edward Storey, a Cambridge bookseller who gave his name to Storey’s Way, where two colleges, Fitzwilliam College and Churchill College, have their main entrances. He died in 1692 and is remembered today for the charitable foundation set up after his son’s death, using rents and profits from his estate to provide almshouses for ten poor women of the parishes of Saint Giles and Holy Trinity in Cambridge.

The Black Bear Inn stood on the corner of Market Hill and Sidney Street, opposite Holy Trinity Church and what is now Market Passage marks its yard. On its first floor was a large assembly room which was used for meetings, auctions and other public gatherings as well as concerts of the Black Bear Music Club.

Throughout the 18th century and into the 19th century, the Black Bear Inn was one of the largest inns in Cambridge. It was a noted venue for concerts from 1773 to 1809 under the auspices of its Music Club, with a preference for Handel, although Mozart, Haydn and Purcell also figured on its programmes.

These programmes, organised and led by violinist John Scarborough, were a mixture of public nights to which ‘no gentleman can be admitted without applying to a member for a ticket, for which he pays half-a-crown’ and benefit nights for one or other of the principal players.

Words of a glee written for the club and performed at Scarborough’s Annual Benefit on 18 February 1816 declared:

To our Musical Club here’s long life and prosperity,
May it flourish with us, and so on to posterity…

Despite these hopes, the club did not flourish or continue into posterity. Instead, the Black Bear Inn was demolished in 1848. Its courtyard is today in part preserved in the footprint of Market Passage, a narrow lane formed from what was the yard of the Black Bear.

Market Passage is lined with distinctive 19th century buildings. Many have attractive yellow and red polychrome or white glazed brickwork, while the sensitive designs of shopfronts tell of the 19th century origins of the buildings.

The former Arts Cinema – now Baroosh, a bar and restaurant – has an attractive frontage of engaged street view columns with classical capitals above a tall plinth. Efforts have been made in recent years to make this a more attractive street, with cobbles and paving, and cafés and bars encouraged to spill out onto the pavement with their furniture.

But the many ‘blind’ shopfronts take away from might be a lively street and make this a less appealing place. While the tunnel entrance from Market Street and the sharp bend that draws the eye to the attractive brick frontage of Montagu House, which is part of Sidney Sussex College, create an enclosed, intimate area, it can appear to be a threatening after dark, and often is covered in the morning with the evidence of late-night clubbing.

Meanwhile, Cromwell’s head passed through various private hands until it found its final resting place in Cambridge in 1960 in the ante-chapel of Sidney Sussex College. 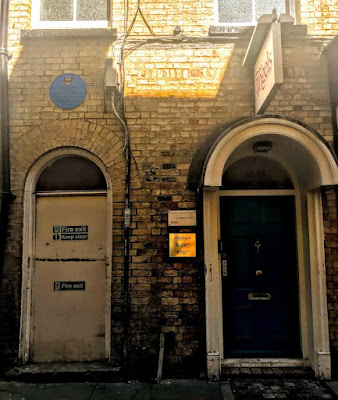 Oliver Cromwell’s plaque is on the site of the Black Bear Inn in Market Passage (Photograph: Patrick Comerford, 2018)

On 5 December 2016, the Cromwell Association and Cambridge Blue Plaque placed the commemorative plaque in honour of Oliver Cromwell in Market Passage, to mark the site of the Black Bear Inn.

The plaque was officially unveiled at Sidney Sussex College on 3 December 2016 by the former Prime Minister, Sir John Major, and was erected two days later close to Baroosh, over the door next to the side entrance of the office of Office Angels, recruitment consultants with their main address at 53/54 Sidney Street, opposite Sidney Sussex College.

But for many people in Cambridge, Cromwell was no angel. Until this plaque was placed in Market Passage, Cambridge had no public memorial to Cromwell.

His two private discreet memorials in Cambridge until then were a stained-glass window in Emmanuel United Reformed Church on Trumpington Street, in which he is dressed in his robes as the Chancellor of the University of Oxford, an appointment he received in 1651, and the oval plaque in the ante-chapel in Sidney Sussex declaring his head is buried there but without identifying the exact place.